A new study makes the connection between Arctic warming and extreme cold waves like the Texas freeze of February 2021. What happens in the Arctic doesn't stay there. 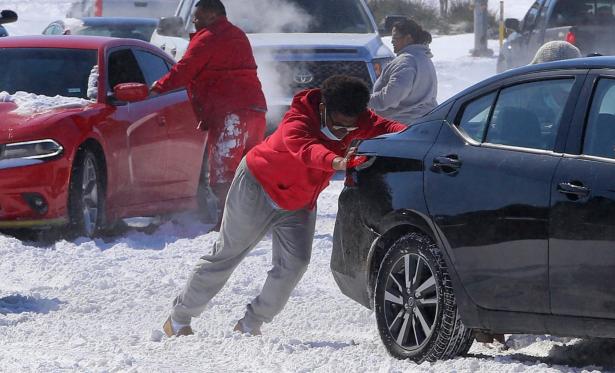 In February 2021, in the midst of rapidly warming global temperatures, an exceptionally severe cold wave hit large parts of North America, from Canada to Northern Mexico. It left 10 million people without power. The impact was particularly severe in Texas, which alone had more than 125 deaths associated with the event.

In the U.S., it was the coldest February in more than 30 years. The cold wave became the nation’s costliest winter storm on record.

The freezing temperatures were associated with a dip southward in the jet stream, a band of strong winds about eight miles above Earth’s surface associated with the boundary between colder and warmer air.

The jet stream flows from west to east, but that’s not the only direction in which atmospheric waves can move – they can also move up and down over large distances, and that can link the weather and climate in one region, like the Arctic, with regions elsewhere, like Texas. 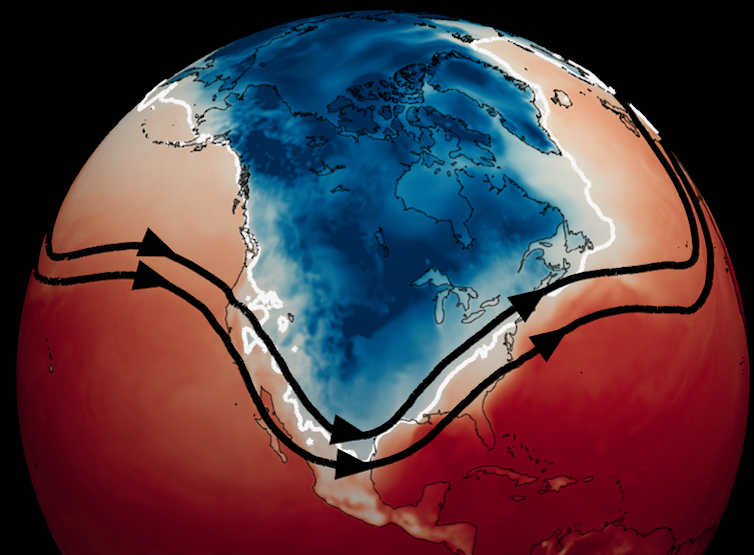 Surface temperatures on Feb. 15, 2021, at 6 a.m. in Texas. The black lines show the jet stream, and the white line indicates the extent of freezing temperatures. Mathew Barlow/University of Massachusetts Lowell, CC BY-ND

When you throw a rock in a pond, you see ripples – waves – expand away from the initial disturbance. While ripples on a pond are a different type of wave than dips in the jet stream, both types of waves can transmit the effects of a disturbance to faraway areas. 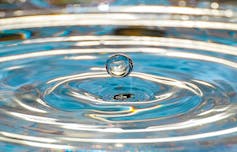 Water ripples in response to a disturbance. Forance/Shutterstock.

In this case, the atmospheric waves transmitted the influence of climate change in the Arctic to parts of North America and Asia.

In a study released Sept. 2, 2021, in the journal Science, we show how that happened and how, counter to what one might expect, events like the February cold wave can actually become more likely with global warming.

What happens in the Arctic doesn’t stay there

The Arctic is warming more rapidly than any other region, at a rate more than twice the global average.

This is causing large changes in the region’s climate, including melting sea ice and, in the late fall, increasing snow cover over Siberia.

These waves move upward into the stratosphere and disrupt the stratospheric polar vortex, another band of fast winds that circles closer around the pole in the middle stratosphere, around 18 miles up. In response, the vortex weakens and stretches.

Two circulation patterns of the stratospheric polar vortex: strong (left) and stretched (right). Blue curves indicate approximate edge of the vortex; shown at about 9.3 miles, or 15 kilometers, above the surface. Mathew Barlow, University of Massachusetts Lowell

Not only can the stratospheric vortex be changed by the waves, but the vortex can also change how the waves move, because the waves are influenced by the wind and temperature fields they move through, and the vortex helps determine those winds and temperatures. What differentiates a vortex stretching event from larger vortex disruptions is that upward-moving waves are reflected back down to the surface, where they can influence lower-altitude weather patterns. 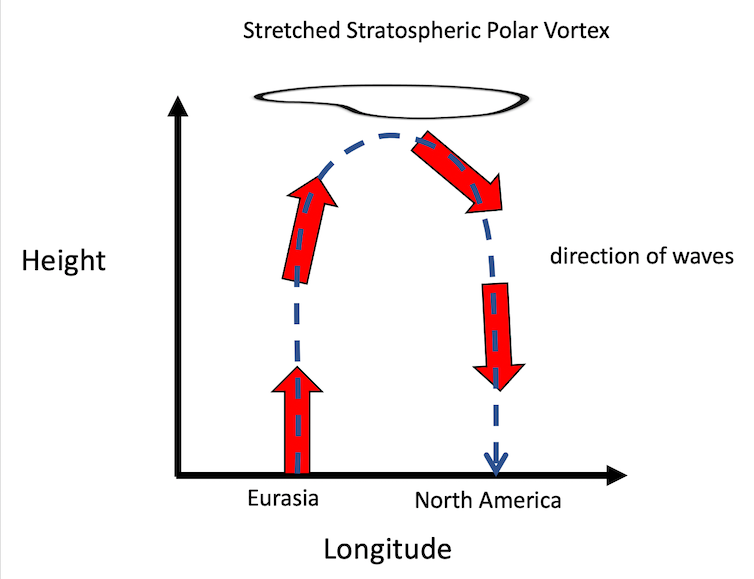 As these downward moving waves collect at lower altitudes over North America, they create a southward dip in the jet stream, bringing cold air farther south than usual. So, the upward and downward movement of atmospheric waves over long distances – like ripples moving across a pond – can link the Arctic to other regions.

Testing cause and effect

We took two different approaches to identifying and examining these relationships.

First, we used a machine learning, a technique in which a computer essentially trained itself to group similar events from the historical data. We then analyzed the stretched vortex events to show that, for those cases, there was a typical sequence of events: first surface temperature changes in the Arctic, then changes in the stratospheric polar vortex, followed by cold waves in North America and Asia – with vertically moving waves providing the connections over the span of a few months. The identified surface temperature changes in the Arctic are similar to those associated with the melting sea ice and increasing Siberian snow cover of Arctic climate change.

We then used a computer model of the atmosphere to evaluate cause and effect and directly test how the atmosphere responds to those Arctic changes. We found that the model reproduced the observed sequence of events.

The machine learning analysis of observations and the computer modeling experiments provide two independent lines of evidence supporting a pathway of influence – from Arctic climate change at the surface up to changes in the stratospheric winds, and finally back down to cold waves in North America and parts of Asia. 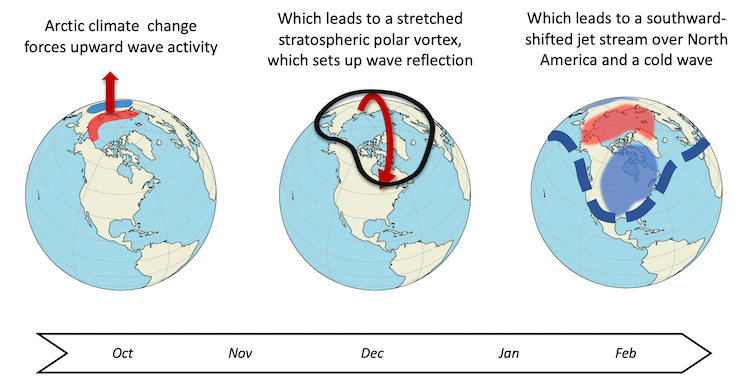 Implications of these results

Our research reinforces two crucial lessons of climate change: First, the change doesn’t have to occur in your backyard to have a big effect on you. Second, the unexpected consequences can be quite severe.

In this case, large changes in the Arctic are not just a local concern – they also have wide-ranging impacts across North America and parts of Asia. And those impacts are not always what people are expecting. The results highlight another reason to rapidly reduce the greenhouse gas emissions that are driving global warming and at the same time the need to develop better strategies for managing extreme weather events, both hot and cold.