Since Georgia implemented automatic voter registration in 2016, its number of registered voters has increased by about 1.5 million. But will it survive Republican assaults? 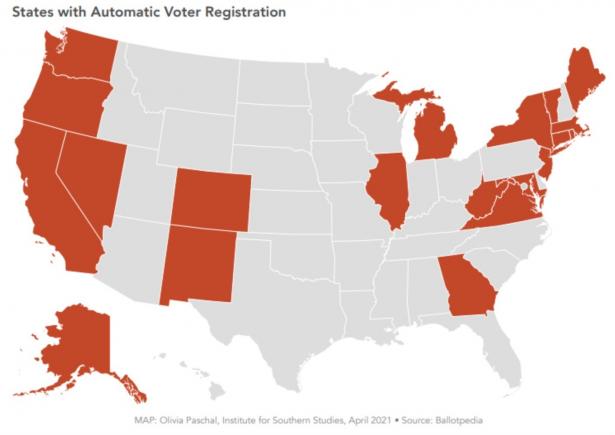 Twenty states, including three in the South, offer some form of automatic voter registration. These programs are now under attack as part of a broader Republican assault on voting rights. ,

Voters in last year's presidential election flipped crucial swing states including the Republican stronghold of Georgia, where a Democratic presidential candidate hadn't won in 28 years. New data shows that a main factor behind the outcome in Georgia was a surge in the number of registered voters due in large part to the state's automatic voter registration. The program automatically registers eligible residents when they interact with the state's Department of Driver Services (DDS) and updates voter information for those already registered.

Georgia now has one of the highest voter registration rates in the nation, with 95% of eligible citizens registered to vote. Compare that to the neighboring states of Alabama, Florida, North Carolina, and South Carolina, which do not have automatic registration and where the rates of eligible citizens registered to vote are 92, 94, 85, and 91%, respectively.

The idea to automatically register every eligible American to vote once they turned 18 was first proposed by President Jimmy Carter of Georgia in the 1970s. He believed automatic voter registration would "transform, in a beneficial way, the politics of our country."

Carter's proposal never became law. But in 2015, Oregon became the first state in the country to automatically register voters who have driver's licenses, adding 300,000 voters to the rolls by 2016.

As of this year, 20 states and the District of Columbia have enacted some form of automatic voter registration, according to the Brennan Center for Justice. Only three of these states are in the South: Georgia, Virginia, and West Virginia. In Virginia, the percentage of registered voters jumped to 93 percent in 2020, an increase of 9 percentage points from 2016. While West Virginia's program has also been on the books since 2016, full implementation of the law has been delayed, and only 75% of the state's eligible voters are currently registered, according to the EAC data.

In recent years, legislation to implement automatic voter registration has been introduced in every Southern state legislature, according to the Brennan Center for Justice — but the policy faces GOP opposition.

Republican lawmakers nationwide introduced a record number of bills this year to limit access to the ballot and give their party an advantage in future elections. Among the proposals were plans to block or end automatic voter registration.

In Georgia, lawmakers introduced a package of restrictive voting bills that included a measure to end automatic registration of people getting their driver's licenses. Introduced in the state Senate, the bill was tabled in March.

State lawmakers in West Virginia also considered a bill that would have ended the state's still-dormant automatic voter registration program, leaving in place the existing policy where residents doing business with the Division of Motor Vehicles can choose to opt in to register. The bill had the support of both the West Virginia Secretary of State's Office and the West Virginia County Clerks Association, but voting rights advocates worried that it would open the door for voter suppression efforts. While the measure passed the state Senate, the House Judiciary Committee chose not to proceed with it.

With the state-level GOP assault on voting rights continuing, there's growing pressure on federal lawmakers to pass the For the People Act, far-reaching pro-democracy legislation that among other things would require states to use automatic voter registration for federal elections. Voting advocates say that if the policy were adopted nationwide, it would register up to 50 million new voters while making voter rolls more accurate, saving money, and cutting down on confusion at the polls. An AP-NORC poll from earlier this year found that automatic voter registration was one of the most popular election reforms in the survey, with support from 60% of Americans.

The Democratic-controlled House passed the For the People Act in March, but it's being blocked in the Senate by Republicans employing the filibuster, which requires 60 votes to close debate and take a vote on non-spending legislation. While there are calls to end the filibuster, which has long been used to undermine progressive reforms, it's being defended by lawmakers on both sides of the aisle. They include Democratic Sens. Joe Manchin of West Virginia and Kyrsten Sinema of Arizona, who may face tough primary challenges because of it.

Benjamin Barber is a researcher and writer with Facing South. @Ben_Barber_