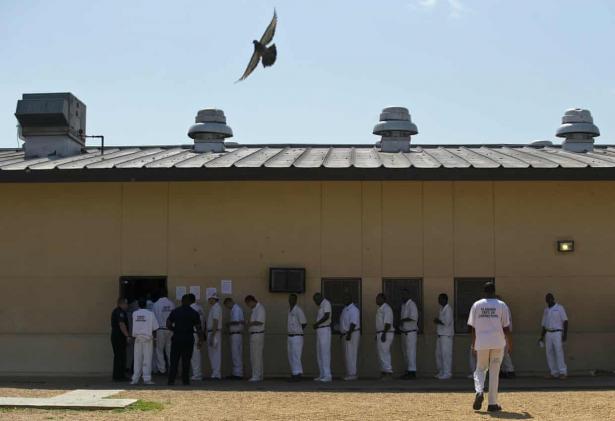 The southern US state of Alabama, which has the highest death rate from Covid-19 in America, is planning to use Covid relief funds to help construct three large prisons and renovate several others.

State lawmakers began a special session on Monday to discuss the $1.3bn construction project, which would use up to $400m from American Rescue Plan funds allocated to the state – nearly 20% of Alabama’s federal pandemic relief money.

The Republican governor, Kay Ivey, said the plan to build new facilities and renovate others could be a solution to safety concerns in correctional facilities, which are notorious in many parts of the US for violence and poor safety records. Indeed, Alabama is facing a lawsuit from the Department of Justice over violence from inmates and staff in its prisons, one of the most understaffed and violent systems in the nation. The lawsuit focuses on staffing, corruption, training and other issues, not infrastructure.

State senator Greg Albritton, a Republican, told the Guardian that the need for new construction is “huge”, calling it “absolutely the top priority” for the state. “We have let this go for a long, long time,” he said. “We’ve been trying for six years to find the answer.” The influx of Covid relief funds may have provided the path to do it, he said.

Prisons have actually been a serious focus of Covid-19 outbreaks in the US. Throughout the country, prisons and detention centers have seen high rates of Covid-19. According to a 2 September study, high incarceration rates in the US fueled the spread of Covid, probably leading to millions of cases.

Other detention facilities, including those operated by US Immigration and Customs Enforcement (Ice), have seen waves of cases in the facilities’ close quarters. One center in south-west Georgia, for instance, has recorded more than 1,000 Covid-19 cases and the most deaths of any Ice facility in the country.

The Alabama department of corrections reported a total of 2,040 Covid cases among inmates in Alabama prisons and 1,138 positive tests among staff as of 21 September.

There have also been accusations of mistreatment of inmates in the pandemic. In Washington DC, inmates were placed under harsh lockdowns that advocates decried as violations of their human rights. In Arkansas, inmates were given ivermectin, an antiparasitic drug, instead of Covid treatments.

Rather than redesigning facilities, research indicates that decarceration can be an important tool halting the spread of the virus, and some advocates have urged lawmakers, like those in Alabama, to consider sentencing reform instead.

“Having a less crowded prison does make it safer from a Covid perspective,” Dr Laura Hawks, a primary care physician and assistant professor of internal medicine at the Medical College of Wisconsin, told the Guardian. “There is an urgency to make prisons less crowded, but the solution is to decarcerate, not to build more prisons,” she said.

Addressing the spread of the virus through measures like masks, widespread testing and vaccination, as the US Centers for Disease Control and Prevention (CDC) recommends, would also help control the virus, she said.

Albritton said the legislature has considered sentencing reform for years, but he called it a “long-term” effort. The special session for Alabama lawmakers will focus mainly on the construction and renovation proposal, but it will also consider changes to two laws on sentencing and mandatory supervision that could offer reduced sentences to as many as 700 inmates.

The Alabama healthcare system needs millions more in funding to get through the current crisis, Dr Don Williamson, president of the Alabama Hospital Association and a former state health officer, told the Alabama Political Reporter: “We need dollars now to help address the crisis we’re in now.”

For the first time in Alabama’s recorded history, there were more deaths than births in 2020. The state has one of the lowest vaccination rates in the country. Health workers, facing Covid quarantines and burnout, are in short supply, and Ivey set aside $12.3m to bring in travel nurses on 3 September.

Jeff Dunn, Alabama’s corrections commissioner, has argued that the relief funds were meant to help relieve “systemic public health and economic challenges that may have contributed to more severe impacts of the pandemic among low-income communities and people of color”. More than half of imprisoned Alabamians are people of color, he pointed out.

But Jerry Nadler, a Democrat from New York and chair of the US House judiciary committee, said that expanding prisons “will particularly harm communities of color who are already disproportionately impacted by over-incarceration and this public health crisis”. Nadler asked the treasury department on Monday to “prevent the misuse of [relief] funding by any state, including Alabama”.

The American Civil Liberties Union of Alabama and the Southern Poverty Law Center Action Fund spoke against the plan in a letter signed by 40 organizations. “Building prisons was not the intended use of these funds and will leave our communities without the lifeline the American Rescue Plan was supposed to be,” they wrote.

Albritton said the new facilities will not expand capacity, but they will replace beds that are not safe or habitable. Five smaller Alabama prisons will close once the new ones are finished. A different plan to lease private prisons fell through earlier this year due to a lack of financing.

When asked why the state is using pandemic relief funds for this project, Ivey said: “So we don’t have to borrow quite so much money and pay all that money back.”