No, Progressive Challengers Are Not 'Far Left'

The Democratic establishment just launched a new PAC to go to war against progressive candidates who challenge incumbents — and the media is doing everything they can to help. 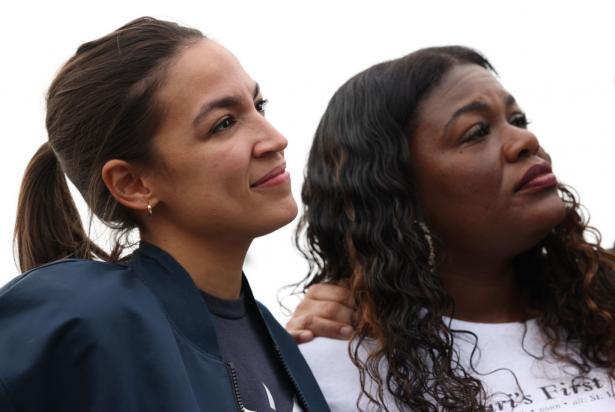 Rep. Alexandria Ocasio-Cortez stands with Rep. Cori Bush during a news conference on the eviction moratorium at the Capitol on August 3, 2021, in Washington, DC., (Kevin Dietsch / Getty Images)

It’s not even 2022 yet and the mainstream media has already come to the rescue of the Democratic establishment, helping them try to crush next year’s progressive challengers. Prominent outlets like the Washington Post and NBC News are now using the term “far left” to describe progressive primary challengers to incumbent Democrats.

“Far left” is a clear signifier of an extreme group opposite the “far right.” Yet progressive primary candidates are in no way extreme. They are not the converse of the actually extreme, fringe “far right” of Trumpism, neo-Nazism, and QAnon. The media’s use of “far-left” foretells mainstream outlets ramping up negative framing of progressives in 2022 primaries.

What establishment Democrats and Washington Post and NBC News editors are telling readers and voters is that advocacy for Medicare for All, a Green New Deal, and housing for all is some fringe “far-left” agenda. Jeffries’s spokesperson called progressive challengers the “extreme left,” then corporate media parroted the establishment smear in its reporting. This is another example of how the posture of the mainstream media and Democratic Party toward progressive policies is extremely hostile, demonizing, and not unlike the GOP’s attitudes toward progressives in Congress. They all want to conjure images in voters’ minds of rioters breaking windows in the name of “anarchy.”

Representatives Carolyn Maloney and Danny Davis, the two incumbents currently backed by Team Blue PAC, are being challenged by Justice Democrats Rana Abdelhamid and Kina Collins. Some have claimed that, because Maloney and Davis are paper cosponsors of Medicare for All and the Green New Deal, they represent the bastion of progressivism. But their decades of inaction in Congress and millions of campaign dollars from Wall Street, Big Pharma, health insurance PACs, and oil companies very clearly demonstrate the opposite.

Jeffries is a paper cosponsor of Medicare for All, too, yet consistently supports the candidate in Democratic primaries who doesn’t support single-payer health care. He never publicly advocates for it. Political observers understand that many lawmakers sign onto these bills solely as a cynical ploy to protect themselves from progressive primaries, and, helpfully for them, the mainstream media decides to ignore this reality in its reporting. A result is that most incumbent Democrats are deemed “progressive,” and the only room to the left, apparently, is the “far left.”

The Team Blue PAC farce continues, with Jeffries’s spokesperson also saying, “It should come as no surprise that the chair of the House Democratic Caucus plans to support the reelection of Members of the House Democratic Caucus who are working hard to enact President Biden’s Build Back Better agenda.” But Gottheimer, one of the three behind Team Blue, is one of the nine House Democrats threatening to sink Joe Biden’s big reconciliation spending bill if the House doesn’t first vote on the so-called bipartisan infrastructure bill. Yet Gottheimer, clearly the very definition of a roadblock to Biden’s agenda, gets to be part of Team Blue PAC because none of this is about policies or legislation. It’s about protecting Democrats already in power. And protecting the status quo for the donor class. And the Washington Post and NBC News are giving the establishment their backing by labeling their opponents as a fringe group.

It does not take a political theorist to find the ideological differences between incumbents like Jeffries, Maloney, and Davis, and primary challengers like Abdelhamid and Collins. Political reporters and editors should be up to the modest challenge. Because there simply is no “far left” or “extreme left” in Congress, whatever those terms are supposed to mean.

Single-payer health care and investments in public housing are not the other side of “far-right” neo-Nazi militias. The choice by Jeffries, mainstream media, and others to designate progressive challengers as “extreme” is one way these entities try to quell threats to existing power structures in the Democratic Party and the United States as a whole. Jeffries is concerned about his future as potential speaker of the House and about campaign contributions to the Party. The real estate developers, Wall Street executives, and insurance PACs funding his wing of the party don’t want to see Medicare for All, a Green New Deal, or a homes guarantee, because it would disrupt their profiteering. Corporate media outlets pushing the same narrative don’t want to see the status quo rocked either. The reality doesn’t matter to them — only the capitalist interests that their myth serves.

It’s not shocking to see the mainstream media serving the interests of the powerful in Congress. It’s disconcerting, though, to see outlets trot out a loaded, negative term in their reporting as if it were fact — fully accepting the framing of politicians such as Jeffries and Gottheimer who have a stake in painting progressives as extreme. The establishment has been building to this moment since Alexandria Ocasio-Cortez won her upset victory over now–corporate lobbyist Joe Crowley in 2018. They were caught off-guard then and have taken primary losses since — most notably Cori Bush’s and Jamaal Bowman’s upset victories against Democratic incumbents.

But the establishment is only putting more money and energy into stopping progressive primary challengers. The Democratic Party has big money, better-prepared primary campaigns, and now, corporate media ready to push the establishment’s exact framing of the challengers trying to take power away from them.

Arthur Tarley is a writer and activist from Queens.