After Rodriguez ordered Che be shot, his hands were chopped off and shipped to Langley, but not before he stole the Rolex from Che’s corpse that was meant for the son of one of his compatriots in Bolivia 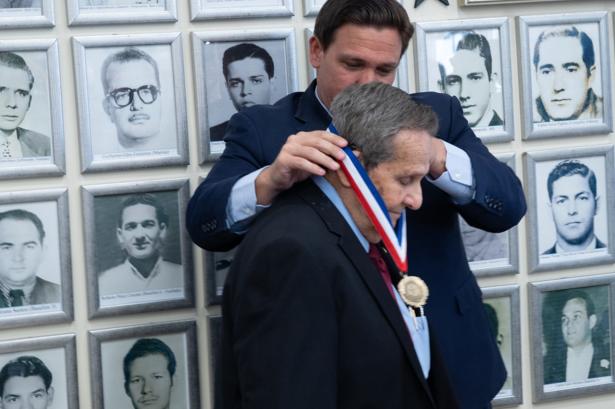 On September 16, 2021, Florida Governor Ron DeSantis awarded the Governor’s Medal of Freedom to Félix Rodríguez, the Cuban anti-communist counter-revolutionary who lives in Florida.

As a contract agent for the CIA Rodríguez helped locate and assassinate Che Guevara in Bolivia in 1967. Assassination is a political murder. The Governor’s medal allowed DeSantis to recognize Rodríguez as a “person who has made an especially meritorious contribution to the interests and citizens of the state, (and) its culture.”

Félix Rodríguez at his house in Miami with a photo of a captured Che in Bolivia.

As Milton observed almost four centuries ago, “the childhood shows the man, as morning shows the day.” Rodríguez shows us his character in his autobiography titled with characteristic bravado Shadow Warrior: The CIA Hero of a Hundred Unknown Battles.

He grew up as the only child of a well-to-do provincial Cuban family of Spanish/Basque ancestry. One of his uncles was a minister in the U.S.-supported government of dictator Fulgencio Batista, another was a judge. He spent time at the farm of his uncle where he rode horses and, at age seven, learned to shoot a rifle.

At age ten he went off to military school, living with another uncle who was Batista‘s minister of public works in a big house in the expensive Miramar neighborhood of Havana. In seventh grade he left to attend a boarding school in Pennsylvania. His family opposed the July 26th movement even before Batista‘s dictatorship was toppled in 1959 by a popular revolution led by Fidel Castro and Che Guevara. They moved to Miami after the revolution.

Leaders of the Cuban Revolution march at the head of a victory parade in Havana, 1959. Fidel Castro (far left) headed the rebel guerrilla army that brought U.S.-backed dictator Fulgencio Batista to resounding defeat. Che Guevara (center), was one of Castro’s three leading lieutenants and the key figure in the Latin American revolutionary movements of the mid-20th  century.

At age 17 Rodríguez joined the Anti-Communist League of the Caribbean sponsored by Dominican Republic strongman General Rafael Trujillo to whom Rodríguez referred to as a “so-called tyrant.”

Thereafter, Félix trained in the Dominican Republic for an invasion of Cuba, but did not participate in the group’s failed 1959 invasion.

By now living in Miami, Rodríguez joined the Cruzado Cubano Constitutional, one of the many anti-communist groups in the city whose goal was to “begin military operations against Castro.” Rodríguez was made a platoon sergeant. He thought of himself as a “revolutionary,” spoke often of “honor” and “freedom” and dreamed of “liberating Cuba.”

When he graduated high school he was given an expensive sports car by his family and spent the summer chasing girls at the beach in Miami. He decided against going to college and instead forged his father’s name on an application to go to fight in Cuba.

In 1961, at the age of 21, Rodríguez volunteered to assassinate Fidel Castro. A spot was picked out for the murder at a location Castro was known to frequent. The young assassin tried three times to take a boat from Miami to Havana but the boat failed to show up and finally the mission was canceled. Rodríguez described himself as being “tremendously disappointed because I was a Cuban soldier. I considered myself at war with Fidel.”

Fidel with newspaper documenting plots against him by the likes of Félix Rodríguez.

He was asked in 1987 by the independent counsel investigating the Iran/Contra scandal if he himself had tried to kill Castro with an exploding cigar. “No sir, I did not,” he answered. “But I did volunteer to kill the son-of-a-bitch in 1961 with a telescopic rifle.”

Rodríguez participated in the Bay of Pigs invasion of the same year. He infiltrated Cuba with a pre-invasion group. When the operation failed, he managed to avoid capture and fled to Venezuela and then back to Miami.

Scene from Bay of Pigs invasion.

In 1966 Che Guevara attempted to defend the Cuban revolution by extending it to other countries in Latin America, first Bolivia. Why Bolivia? It was Latin America’s poorest country, most illiterate, most rural, and most Indian. It was also the most unstable country in Latin America having gone through 189 changes in government since it became an independent republic in 1825.

Che arrived in Bolivia in early November 1966. His plan was to set up a camp for his guerrillas and once they were trained move his troops north to engage the weak Bolivian army. But his troops were discovered early and were on the run until a force of Bolivian soldiers, trained and armed by the United States, which provided everything from breakfast to bullets, encircled him.

It was Rodríguez, dressed as a Bolivian soldier, who identified the movements of the guerrillas. Che was wounded and captured. Rodríguez attempted to interrogate Che with no success.

The CIA had a prearranged agreement with Bolivian dictator René Barrientos that, if Che were captured, he would be executed. It was Rodríguez, after speaking by phone with Barrientos, who gave the order. A Bolivian sergeant carried it out.

Che’s body was tied to the strut of a helicopter and flown to the nearby village of Valle Grande.

There he was laid out on a cement table of a hospital to accommodate photographers who were allowed to take pictures of Rodríguez’s trophy.

Che Guevara after his execution on October 9, 1967, surrounded by Bolivian soldiers.

After Che was shot his hands were chopped off and flown to CIA headquarters in Langley, Virginia, where he was positively identified. The CIA had had his fingerprints since 1954.

The operation to capture and kill Che Guevara was run right out of President Lyndon Johnson’s White House. When Che was killed the director of the operation, Walt Whitman Rostow, who had an office in the White House, wrote on White House stationery to Johnson that “the troops that we trained and supplied finally got him.”

Lyndon B. Johnson and Walt W. Rostow in the Oval Office.

Awarding an assassin the medal of freedom demonstrates the level of decadence to which the political culture of Florida has been dragged by the clout of South Florida’s counter- revolutionary Cubans.

In the years to come our hero of 100 unknown battles was to fight against those seeking freedom from oppression from Vietnam to Nicaragua.

Incidentally, Rodríguez took Che’s Rolex watch off the corpse and proudly shows it to admirers. Che had intended his watch to be given to the son of one of his compatriots in Bolivia.

Micheal Stephen Smith and his co-author Michael Ratner wrote the book “Who Killed Che? How the CIA Got Away With Murder” (OR Books).  He is the cohost of Law and Disorder Radio on the net at lawanddisorder.org.

Michael can be reached at mssmith97@aol.com.