"It's almost as if Facebook's monopolistic mission to either own, copy, or destroy any competing platform has incredibly destructive effects on free society and democracy," said Rep. Alexandria Ocasio-Cortez. 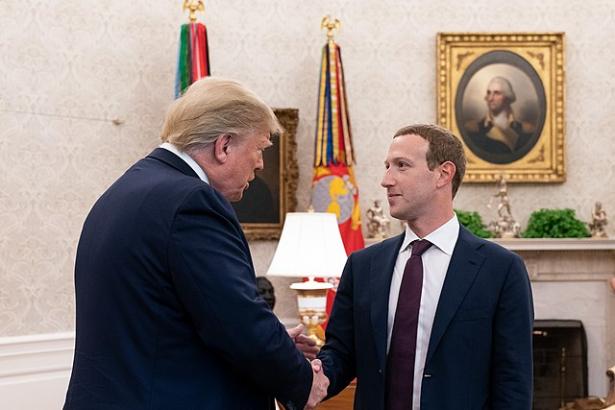 Rep. Alexandria Ocasio-Cortez was among the progressives calling for government action to break up Facebook after the company and its family of apps—including Instagram, Messenger, and WhatsApp—experienced a massive outage on Monday, rendering inaccessible services that billions of people worldwide use to communicate.

"Facebook must be broken up and brought to justice."

"It's almost as if Facebook's monopolistic mission to either own, copy, or destroy any competing platform has incredibly destructive effects on free society and democracy," Ocasio-Cortez wrote on Twitter. "Remember: WhatsApp wasn't created by Facebook. It was an independent success. FB got scared and bought it."

"If Facebook's monopolistic behavior was checked back when it should've been (perhaps around the time it started acquiring competitors like Instagram)," the New York Democrat added, "the continents of people who depend on WhatsApp and IG for either communication or commerce would be fine right now. Break them up."

Facebook—in a Twitter post—apologized for "any inconvenience" that may have been caused by the outage, which lasted roughly six hours and cost CEO Mark Zuckerberg $6 billion in net worth. In a blog post Monday evening as its services started to come back online, Facebook blamed the outage on "configuration changes."

The blackout, believed to be the largest in the company's history, came just hours after "60 Minutes" aired its interview with Frances Haugen, a former Facebook employee who accused the tech behemoth of putting "profit over safety" by refusing to combat rampant misinformation and incitement to violence on its platform.

"Facebook is killing people," Rep. David Cicilline (D-R.I.), chair of the House Antitrust Subcommittee, said following Haugen's interview. "Whether it is teen suicides, January 6, or Covid misinformation, Facebook has shown that its unchecked power to dictate and profit from what people see online is a threat to our safety and our country."

"As I have said before," Cicilline continued, "Facebook must be broken up and brought to justice."

At the same time as the company scrambled Monday to address an outage that critics seized upon as further evidence of its monopolistic reach, Facebook filed a motion to dismiss the Federal Trade Commission's antitrust lawsuit, which accuses the tech giant of engaging in an illegal "buy-or-bury scheme to maintain its dominance."

"It unlawfully acquired innovative competitors with popular mobile features that succeeded where Facebook's own offerings fell flat or fell apart," alleges the FTC's complaint, which specifically mentions Facebook's purchase of Instagram in 2012 and WhatsApp in 2014.

"To further moat its monopoly, Facebook lured app developers to the platform, surveilled them for signs of success, and then buried them when they became competitive threats," the FTC says. "Lacking serious competition, Facebook has been able to hone a surveillance-based advertising model and impose ever-increasing burdens on its users."

In its response to the lawsuit on Monday, Facebook contended that the agency's complaint "pleads no facts plausibly establishing that Facebook has, and at all relevant times had, monopoly power." 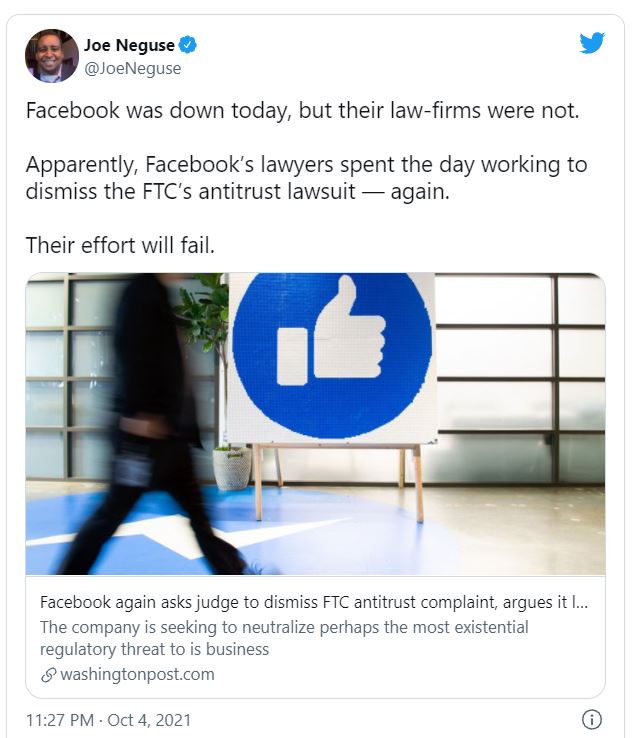 As the New York Times reported Monday, the impact of the hours-long Facebook blackout "was far-reaching and severe."

"Facebook has built itself into a linchpin platform with messaging, live-streaming, virtual reality, and many other digital services," the Times noted. "In some countries, like Myanmar and India, Facebook is synonymous with the internet. More than 3.5 billion people around the world use Facebook, Instagram, Messenger, and WhatsApp to communicate with friends and family, distribute political messaging, and expand their businesses through advertising and outreach."

"Facebook is also used to sign in to many other apps and services," the Times added, "leading to unexpected domino effects such as people not being able to log into shopping websites or sign into their smart TVs, thermostats, and other internet-connected devices."

Vincent Bevins, a journalist currently based in Brazil, emphasized during the outage that "WhatsApp and Messenger are essentially public infrastructure for huge parts of this planet (it varies by country), and that should come with some responsibilities to citizens."

"I am fine because I have credit on my phone to send text messages/call people," Bevins wrote on Twitter. "But I can tell you right now that a lot of people, here in Brazil and all over the place, do not—they were relying on those 'free' apps to communicate with friends and family today."

In a column on Monday, Motherboard's Edward Ongweso Jr. observed that "for the past decade, Facebook has not simply had a deleterious effect on the general public, but established itself as the major if not sole conduit for internet activity across the world with a series of ruthless acquisitions that are now under scrutiny for breaking antitrust law."

"A lack of transparency and accountability aren't why Facebook has been able to exploit content moderators or independent contractors, nor why it has been able to facilitate a genocide or spark a mental health crisis, or any of the long lists of sins and abuses we can amend to the company's constantly growing record," Ongweso argued. "The reason it has been able to do all this (and get away with it) is power. Shining a light on power doesn't necessarily undermine power, but bringing a hammer down on it will."