America Is in the Midst of a Dramatic Labor Resurgence

As corporations fail to meet worker demands, they are increasingly encountering a labor force that isn’t going to take it. They are striking; they are picketing; they are demanding fair contracts. They are forming new unions. It's a beautiful thing. 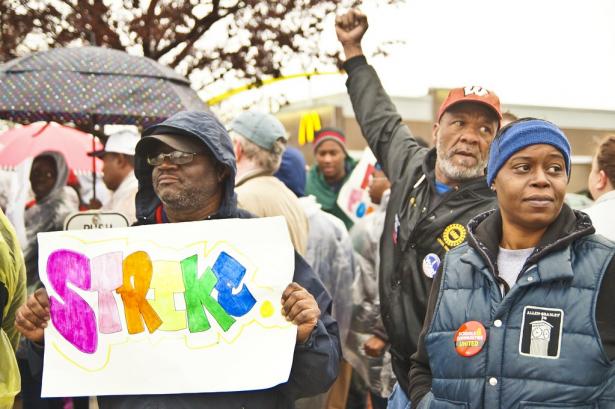 , Fight for 15 by Overpass Light Brigade is licensed under CC BY-NC 2.0

Our nation is in the midst of a labor revolution. It’s a wonderful thing, and you may not be aware of it.

After an emotionally, physically, and mentally taxing year dealing with ramifications of Covid-19, workers across the country are standing up for basic dignity and respect on the job in a historic way. And through the pandemic, the nation was reminded of the essentialness of labor—not the labor of Wall Street; rather, the labor that drives our hospitals, our groceries, our mail, our livelihoods.

They are striking; they are picketing; they are demanding fair contracts. They are forming new unions on campuses and coffeehouses, and they are walking out on low-wage jobs at Burger King, Dollar General, and elsewhere. In short, laborers are demanding their due. And it is infectiously spreading from workplace to workplace.

Much of the renewed breath of labor activism can be tracked to the courageous workers at the Amazon warehouse plant in Bessemer, Alabama, who in February attracted national attention for demanding dignity against one of the largest and most powerful employers in America. In that campaign, we witnessed a greedy corporate giant pull out all the stops and engage in gross union-busting tactics that require rerunning the election, according to the National Labor Relations Board. We saw Amazon come under the microscope for its poor working conditions. We applauded a president of the United States who sided with the workers. And despite falling short of reaching its unionization goal, those mostly Black laborers told America’s workforce: If we can stand up for ourselves, you can, too.

In the weeks that followed, workers at corporate behemoths like Frito-Lay, Nabisco, and Kellogg’s, among others, have stood up in large numbers to demand fair pay, paid time off, and affordable health care. And they have won, or are winning, key concessions.

The American public is responding by delivering its highest approval of labor unions in decades!

As workers take action, the Biden administration is operating in the background to give strength to them. The administration has delivered a worker-friendly NLRB, a slew of appointees across the administration who are willing to hold corporations accountable, and a policy agenda focused on working families. By delivering stimulus checks, child tax payments, child hunger benefits, and more, the Biden administration has effectively raised the income floor for America’s workers. They can breathe, and they don’t have to take your crappy-paying job with no benefits. Businesses are complaining of a “labor shortage,” which in reality is—viewed from the perspective of workers—labor power in action. Employers will need to compete to offer attractive job offers, which is exactly as it should be.

When corporations fail to meet worker demands, they are increasingly encountering a labor force that isn’t going to take it. Just look at the numbers.

The Bureau of Labor Statistics tracks “large strikes,” meaning strikes of over 1,000 workers. In 2020, there were a total of nine such strikes, involving 28,800 workers. In 2021 so far, the total number is already at 12 strikes, involving 22,300 workers. And they’re not done yet. There are three large pending strike authorizations that could add to that tally: IATSE-affiliated Hollywood production workers (60–65,000 workers), Kaiser Permanente workers (37,000), and UAW-affiliated John Deere workers (roughly 10,000).

It’s not just “large strikes,” either. In 2020, the Federal Mediation & Conciliation Service, a government agency that handles labor disputes, recorded under 50 official strikes resulting from union labor disputes. So far in 2021, the Cornell ILR Labor Action Tracker has recorded over 100 such strikes—and it’s only October. There are other counts out there that suggest the federal agencies are underreporting labor actions that are going on; regardless, there is little dispute that the fundamental trend is clear. Workers of the nation are uniting.

Jonah Furman, who closely monitors the labor movement for Labor Notes, told me that labor revolt has been building for some time. “With around 10,000 workers currently on strike, and over 100,000 more moving in that direction, we’re beginning to see private-sector workers pick up where the teachers’ strike wave left off before the pandemic,” Furman said.

In these uncertain political times, here’s some clarity: There’s probably a picket or a worker-led movement near you. Join it. The time is ripe to build real working-class solidarity in this country.

Faiz Shakir is the founder of the advocacy journalism organization More Perfect Union.