Catholic Health has spent the pandemic buying real estate instead of fixing understaffing issues that overburden workers and put patients’ lives at risk. Mercy Hospital workers have walked off the job to demand new priorities. 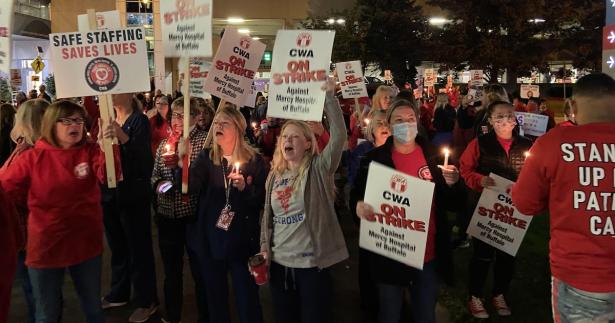 As the pandemic pushed workers at Mercy Hospital to the edge both mentally and physically, their conflict with management came to a head. , CWA

In the first year of nursing school, students are taught that a “culture of safety” at health care facilities involves spending at least 70 percent of their time performing direct patient care. For chronically understaffed health care workers across the country, having the capacity to meet this safety standard would take a miracle of biblical proportions.

Last Friday, the roughly 2,500 health care workers at Mercy Hospital of Buffalo, New York, decided they could no longer wait for a miracle. Their union, CWA Local 1133, has been trying unsuccessfully to negotiate with Catholic Health management over seriously lagging wages, a compromised health care plan, and persistent understaffing. On October 1, they walked out on strike.

Workers at Mercy Hospital disagree. “There is no nursing shortage,” says Shannon Sherman, a registered respiratory therapist who has worked at Mercy for eighteen years. “There is no respiratory therapy shortage. There is no shortage of cleaning people. People are choosing not to work in hospitals anymore because of the conditions, and [Catholic Health] is not utilizing this opportunity to get those people back.”

“Our huge issue is staffing,” says Sherman. “Unfortunately, that stems from our pay.” Sherman says Mercy used to be more competitive with other hospitals in the area. But now, workers in her same position at Mercy’s competitors make $4 an hour more than she does, a wage gap that holds across positions.

Although Sara Cutlip is a nurse in the relatively well-staffed cardiac catheterization lab, she sees how understaffing affects the entire facility. “We go to other floors to help,” Cutlip says. “We transport patients and bring them to our unit and give them baths and take care of them and send them back to other floors.” The strike is “about sticking together with our coworkers and doing what’s right by them.”

While Sullivan attributed the hospital’s staffing issues to the pandemic, Sherman notes that understaffing long predates the onset of COVID-19. “We bargained hard in our last contract in 2016 to get better staffing, but the hospital never made good on that,” she says. “We had promises made by the administration that were never kept. Nothing ever got fixed, and there were never any repercussions for management. And then the pandemic hit and people were like, ‘We’re not doing this anymore.’”

Spending on Everything but Patient Care

As the pandemic pushed workers at Mercy Hospital to the edge both mentally and physically, their conflict with management came to a head.

Immediately after they agreed last year to take only a .5 percent raise and extend their contract because of the uncertainties of COVID, Catholic Health bought $37 million of land to build a new hospital, and spent another $11 million acquiring an ambulatory surgery center. “That was a huge slap in the face,” says Sherman, “for them to cry broke and then say, ‘Hey, we just bought all this land and we’re going to build another facility.’”

Catholic Health’s website also boasts that it is “making the largest investment in its history, dedicating more than $100 million [to] state-of the-art technology.” While this technology is supposed to “connect” patients with services, workers say it often has the opposite effect. “I spend so much more of my time looking at a computer than patients,” says Sherman, “and that is not the purpose of health care.”

At Mercy, the prevailing attitude is that Catholic Health’s money should go to existing workers and patients. “Seeing how short-staffed we are, hearing the stories about how short-staffed the units are, going up and seeing the patients not being cared for as well as they should have been because of short staffing,” says Cutlip, “and then hearing about all these purchases the hospital was able to make? That really takes the cake.”

In addition to its mid-pandemic acquisitions, Catholic Health has now spent several million dollars on hiring and housing scabs for the strike. Mercy workers say these expenses contradict Catholic Health’s claim to be suffering from budgetary issues that would prevent it from adequately addressing its staffing problems — including paying existing workers more so they don’t leave for other hospitals.

“If you’re willing to pay a scab three or four times what our salary is, why shouldn’t we ask for that?” asks Sherman. “And we’re not even asking for that. We’re just asking for them to be fair to us.”

“I don’t know what goes through Catholic Health’s heads to not want us to stay,” says Cutlip. “If they have the money to buy new facilities but then they increase my health insurance plan, I have really no reason not to look elsewhere. Which is a shame.”

For Mercy workers and the patients they serve, the issue of resource allocation isn’t just about bread-and-butter economics. It’s about life and death.

There’s a strong emotional current subtending these demands for adequate staffing. Sherman laments that there are some patients “that don’t have family, that don’t have visitors — and we don’t even have a few extra minutes to sit there and chat with them. It’s the worst feeling in the world to know that someone is so lonely, but you can’t even take a half hour to make it feel like we’re truly there for them.”

Workers on the front lines say Catholic Health’s insistence on maximizing profits by cutting labor costs drives unnecessary suffering and takes basic human dignity as its collateral. Patients — or “clients,” per the new industry lingo — bear the greatest consequences, and health care workers become harried attendants in the mere maintenance of human life, not in its flourishing. Their working conditions are at direct odds with the compassion that drove many to the health care industry in the first place.

“When you have to wash someone’s soiled body, they’re not your ‘client,’” Sherman says. “But unfortunately, that’s the culture of health care now. A do-more-with-less attitude because it’s not about patient care anymore, it’s all about the money. This is not what health care is supposed to be, but they’re trying to turn it into a business just like any other.”

The strike at Mercy Hospital is about wages, health care, and understaffing. But more than that, it’s a battle against the dismal and dehumanizing forces of capitalism itself.

“If we don’t take this stand now it’s like we’re rolling over and we’ll never get anything back from them,” says Sherman. “Our patients are in there. This is emotionally draining. This is our life. And it’s sad. It’s very disheartening. We want to get in there and see our patients sooner than later, but we’re not going to do it at the cost of patient care.”

“Honestly,” she adds, “that’s really what this strike is about. When you’re in the hospital, you deserve to be taken care of.”

Heather Rust is a nursing student in New York and a member of Democratic Socialists of America.

Our new issue, “The Working Class,” is out in print and online now. Subscribe today at a discount to get it.