This logistical model is the engine of breakneck capitalism. But its fragility is now being exposed. Decades of deregulation, privatisation and market worship have left society vulnerable to the unbidden force of “just-in-time” supply chains. 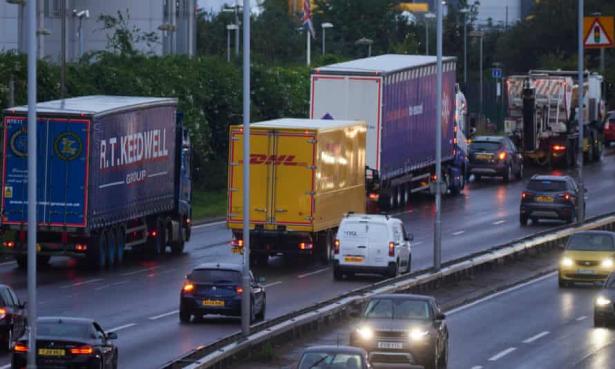 ‘Speed, as any Formula One driver will tell you, brings its own risk.’ Lorry drivers on the North Circular, London, at rush hour., Photograph: David Levene/The Guardian

A price shock on the global natural gas markets brings down several small energy providers, leaving customers without heating and facing rising fuel prices. A fire knocks out the huge cable sending electricity from France to the UK, threatening homes with darkness and increasing power bills. The container ship Ever Given, bound for Felixstowe from Malaysia, gets stuck in the Suez canal for six days, backing up shipping traffic at an estimated cost of £730m and delaying that electronic gadget you ordered from Amazon Prime.

What these incidents have in common is the speed at which a single event can disrupt the supply chains that crisscross the world . Almost every time you order something online, it is transported via a network of factories, rails, roads, ships, warehouses and delivery drivers that together form the global economy’s circulatory system. This tightly calibrated infrastructure is designed for perpetual motion. Once one link breaks or stalls, the impact on today’s just-in-time supply chains can be felt immediately.

Just-in-time was the idea of Taiichi Ohno, an engineer at Toyota in the 1950s, who was inspired by the work of Henry Ford. Ohno defined it as a way of eliminating “waste” – by which he meant stockpiles, extra workers and unused minutes – in the production and movement of goods. Instead of wasting time, labour and money by storing parts along the assembly line or warehousing goods (as manufacturers had done for decades), Ohno’s idea was that suppliers could instead deliver these just as they were needed. In turn this would increase profits, reducing the amount that businesses spent on maintaining inventories and paying for additional labour.

After its introduction to the west in the 1980s, the just-in-time model gradually moved out of the car plant and into every type of goods and service production. It forced its way down every supply chain until each supplier, big or small, was expected to deliver products promptly to the next buyer. This increased competition between companies to deliver goods quickly, which meant firms reduced their costs (usually the price of labour). Just-in-time delivery thus contributed to the growth of low-wage, often more precarious jobs, with workers recruited only when they would be needed. This constant squeezing of workers has fuelled our 24/7 work culture and the mental health problems that go with it, while attempts to cut the price of labour have added to the growth of economic inequality, regardless of who sits in government.

Delivering products at speed relies on infrastructure. From the 1980s onwards, motorways widened, ports deepened and extra runways were added here and there to keep up with the pace of change. Twenty-first century warehouses transformed from places of storage into vast distribution and fulfilment centres. But speed, as any Formula One driver will tell you, brings its own risks. Floods, power outages, closed roads, labour disputes and, of course, pandemics can all halt the system. Because just-in-time has eradicated stockpiles, an unforeseen crisis can lead to treacherous shortages. At the start of the pandemic, there were widespread shortages of PPE, gowns, masks and plastic gloves – all of which rely on just-in-time production, with few stockpiles kept as backup.

Now, our just-in-time world is becoming increasingly crisis prone. The schedules of container shipping have been unreliable since the pandemic began in early 2020. The rise of fuel prices has also led to reduced shipping speeds, known as “slow steaming”, to cut costs. The British International Freight Association, meanwhile, has warned about a “shortage of land transport” – in other words, dockers or warehouse workers have gone down with Covid and lorry drivers are in short supply owing to the pandemic and Brexit, as well as years of stagnant wages, long hours and lack of available training. The Road Haulage Association estimates the current shortage at 100,000 drivers in the UK. Too few drivers means clogged ports, stalled ships, empty shelves and higher prices.

Supply chain managers and logistics experts are aware of all the potential problems, and have been debating the trade-off between “risk” versus “resilience” – the latter being the ability to minimise or quickly recover from a disruption – for the past decade or more. Low just-in-time inventories increase the risks of shortages when a crisis bites. “Resilience”, however, means bigger stockpiles, more workers, multiple suppliers and higher costs. This creates a dilemma. Competition makes resilience itself risky for individual companies. Who wants to buy from the higher-priced laggard? Yet so long as profitability is the driving force, national efforts to turn inward or “take back control” – ironically, often in order to create an imagined resilience, as with Brexit – simply create more disruptions, broken supply chains and higher prices as businesses seek to recover losses. The regime of cheap consumer goods becomes more and more difficult to sustain.

There are even bigger implications for this regime of breakneck capitalism. All this global real-time motion is driven by fossil fuels that are driving climate breakdown. The increase in tsunamis, wildfires, floods and other extreme weather events is making supply chains and the necessities they deliver even more vulnerable. Those protesters sitting down in central London or out on the motorways are on to something. One way or another, if you deprive big business of the free use of its favourite deadly energy sources, you can slow things down to a human pace – and maybe even save the planet while you’re at it.

Decades of deregulation, privatisation and market worship have left society vulnerable to the unbidden force of “just-in-time” supply chains. No amount of government subsidies, lower taxes, job training and other shopworn policies will be enough to address the crises we face, from the pandemic to climate breakdown, which are causing supply chains to fail. Now is the time to think about not just how we make and consume things, but also how we move them.

[Kim Moody is a visiting scholar at the University of Westminster.]

Tens of millions have placed their trust in the Guardian’s high-impact journalism since we started publishing 200 years ago, turning to us in moments of crisis, uncertainty, solidarity and hope. More than 1.5 million readers, from 180 countries, have recently taken the step to support us financially – keeping us open to all, and fiercely independent.