Raising the Ceiling of Political Possibility in Boston

Michelle Wu's candidacy for Mayor, building on years of work by a variety of grassroots organizations, is cohering the kind of multi-racial coalition that could change the political landscape at both the city and state levels. 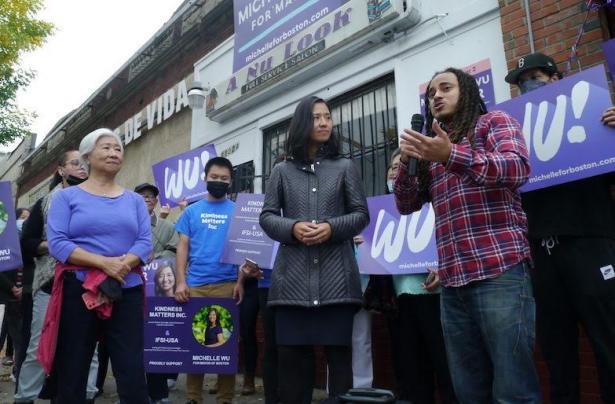 In 2019, voters in Boston elected a breakthrough progressive and diverse city council. Poised to move Boston in a new direction, the council ran up against three major roadblocks to implementing a social justice agenda. The first was state preemption of any city action in favor of workers’ rights and tenant protections. The second lay in Boston’s strong-mayor system of government. The third was the strong mayor’s political dominance – with no term limits and a war chest orders of magnitude greater than any city councilor or state legislator, a vindictive mayor can blacklist any challenger.

But now there is an opportunity to put a big dent in these obstacles. Boston’s November 2 mayoral election may result in a progressive woman of color, Michelle Wu, becoming the city’s chief executive. And Wu’s campaign, building on years of work by a variety of grassroots organizations, is cohering the kind of combative multi-racial coalition that could change the political landscape at both the city and state levels.

That’s why this fiercely fought mayoral contest is the most consequential election in Boston at least a decade.

HITTING THE LIMITS OF A PROGRESSIVE CITY COUNCIL

The city council elected in 2019 was a big step forward. For the first time in Boston’s nearly 400-year history, the elected legislative leadership is majority BIPOC and majority women, including both of the 2021 candidates for mayor, City Councilors Michelle Wu and Annissa Essaibi George. Liz Breadon became the first out lesbian elected to the council, and Julia Mejia became the first Latina to win a seat.

Beyond representational diversity, eight of the 13 councilors formed a progressive bloc on the council, with a pro-rent control majority. After Massachusetts voters banned any municipality from enacting rent control through a ballot initiative in 1994, rent control was a taboo topic in city hall and the statehouse. The city council majority broke this quarter-century of silence in January 2020, a week after their inauguration, to testify at a state legislative hearing in favor of lifting the ban. Despite support from a majority of councilors and three-quarters of voters, the statewide ban continues to prohibit city-level action to protect tenants from rising rents.

In July 2020, even after a reignited protest movement against police brutality, the city council voted 8 –5 in favor of the budget proposed by then-Mayor Marty Walsh (now Labor Secretary), which maintained police spending. This budget did not meet activists’ demands for a 10 percent decrease in the police budget but did increase spending for affordable housing and social services. Facing pressure from non-police public sector unions, three progressive councilors broke from the progressive bloc and voted with more establishment members to approve the city budget. The City Council did not rubber-stamp the mayor’s budget, as it has usually done, but the progressive bloc still lacked power to hold the mayor accountable to movement demands.

Now all that may change.

As the top vote getter in the 2017 and 2019 at-large city council races, Wu launched her challenge to then-Mayor Walsh in September 2020, when his political future was still in flux. To claim the progressive lane from the labor-backed mayor, Wu has championed social democratic policies such as fare-free public transportation and abolishing the Boston Planning & Development Agency to rein in displacement. Essaibi George entered the mayoral election when Mayor Walsh became the Secretary of Labor. Her policy platform, which would bolster the status quo, includes hiring 300 more police and opposing rent control.

In the preliminary election on September 14, which narrowed the field to the top two candidates, Wu took the lead by winning considerable citywide support, while Essaibi George commanded the highest-turnout, whitest precincts in the city. Councilor Andrea Campbell and Acting Mayor Kim Janey, both Black women candidates, won in the densest Black precincts but came in third and fourth and will not appear on the general election ballot. Historically, these majority Black precincts have formed the political backbone of community organizing in Massachusetts and have originated progressive social policies, from rent control in 1971 to the Fight for $15 from 2012 – 2018. Now, after the elimination of Janey and Campbell in the preliminary election, Black voters are the most powerful uncommitted voting bloc.

Black political leaders, under the banner of Wakanda II, had supported Janey but now have consolidated behind Wu. If they back Wu, Black voters will lead the coalition that projects power for a social democratic agenda at the state level. Across the region, the share of voters who support a social democratic agenda that affirmatively improves the lives of Black residents now can contest the white majority that had excluded Black leaders from power for generations. Progressive Black leaders in Boston have long worked in coalition with Latinx and AAPI communities, and this multiracial alliance has its best opportunity to elect a mayor of color since Rainbow Coalition leader Mel King’s run for mayor in 1983.

DRIVING A PROGRESSIVE STATE-LEVEL AGENDA FROM BELOW

While state preemption laws limit the direct power of municipal leaders, progressive municipal elected officials have the power to drive a social democratic agenda at the state level. Elected officials at the municipal level pose viable threats to incumbent state legislators because they have the voters and donors needed to launch successful challenges in low-turnout Democratic primary elections. Municipal elected officials often win special elections to fill vacancies in the statehouse, and over one-quarter of state legislators won their seats in very low-turnout special elections.

If Black voters give Wu the edge on November 2, a united front of BIPOC residents, workers, and young people must pressure the incoming mayor to wield her power for progressive change at the state level. With the limits of the city’s authority on voting access, tenant protections, and workers’ rights, Wu can use her political capital with members of the state legislature to push for making public transportation free and overturning the ban on rent control.

Although the Boston delegation in the State Capitol on Beacon Hill makes up only one-tenth of state legislators, legislators representing Greater Boston comprise one-third of seats in the statehouse. Wu can lead as mayor, but she cannot put enough upward pressure on Beacon Hill on her own. Fortunately, the Greater Boston region has many consequential races in 2021. On November 2, voters in Somerville could elect an Our Revolution-aligned mayor and a Democratic Socialists of America-majority city council. Progressives could win majorities on city councils in Chelsea, Medford, and Cambridge, and movement candidates are on the ballot in at least a dozen cities. Together, a united front of BIPOC-led organizations, DSA, Sunrise Movement, labor unions, and a solid bench of progressive municipal elected officials, led by a Mayor Wu, could put upwards pressure on state legislators.

BEYOND THE MAYORAL RACE: WINNING DEEP DEMOCRACY IN BOSTON

Electing a progressive woman of color as mayor does not protect the city from the lack of accountability that stems from a strong-mayor system. Regardless of who becomes the mayor of Boston, it is clear the anti-democratic strong-mayor system of government must be reformed. Currently, the city council cannot amend the budget and can only vote yes or no on the entire package ($3.6 billion in this cycle) which is solely created by the mayor and her staff. The mayor also appoints the school committee, making Boston the only one of Massachusetts’ 350 municipalities that doesn’t elect its school board. As a result of resistance to the strong-mayor system, two separate ballot initiative efforts have emerged in Boston this November.

A binding ballot question (Question 1) would change the city charter to allow city councilors to amend the city budget and create a participatory budgeting process. Right to the City Boston (501c3), the Center for Economic Democracy, the Massachusetts Voter Table, and many BIPOC-led organizations worked with City Councilor Lydia Edwards to put this question on the ballot. By allowing city councilors to amend the budget, progressive organizations and labor unions will have greater influence on how resources are spent on social services and city programs. A participatory budgeting process opens new pathways for ordinary people to make decisions that impact their communities. If passed, a strong working-class coalition will need a strategy to demonstrate more power than well-financed efforts that co-opt the rhetoric of racial equity but advocate for corporate interests.

If both ballot initiatives pass, the mayor who serves as the first woman and first person of color elected as mayor of Boston will have less power than any of her predecessors since 1909, when the modern city charter with the strong-mayor system was adopted. Ultimately, raising the ceiling of political possibility in Boston requires a strong coalition that derives its power from a multiracial working-class voting bloc to make the most of these city-level democratic reforms and to pressure the mayor to use her political capital to enact social democratic change at the state-level.

Voters in Boston broke through the ceiling of representation in 2019 and are poised to elect a progressive woman of color as the city’s top executive. But to make social democratic change that improves the lives of working-class people, we cannot rest on solely electing diverse and progressive leaders. Now is the time to devolve power at the city level and project power up to the state level.

Beth Huang is a member of the Boston Democratic Socialists of America. Boston DSA has not endorsed any candidate in the Boston mayoral election.

Organizing Upgrade is a political project in support of the movements for multi-racial democracy. We believe the moment calls for building on many levels: a broad front against white nationalist authoritarianism, driven by a progressive front rooted in communities of color and working-class communities, and within that, a core of anti-capitalist/socialist activists.  Our definition of democracy includes the full spectrum of social, economic, and political rights and equality. These are inextricably intertwined, with the struggle against racism and gender/sexuality expression at the core. We are based in movements in the United States while recognizing the importance of solidarity with similar movements around the world. We hope to further the work of movement building by providing a forum for strategic thinking and analysis, reflecting on organizing experiences, and lifting up the voices and work of people with the deepest stake in transformative change. Click HERE to donate.