With much at state for Virginia workers and families, 200 out-of-work housekeepers, cooks, servers, dishwashers, and hospitality workers triple efforts to increase goal to knock over 200,000 doors for Democrats by Election Day. 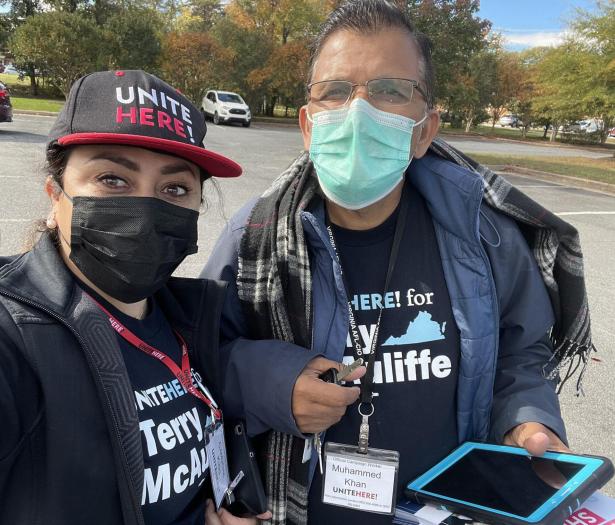 “We don’t want a second Trump in Virginia,” said UNITE HERE 25 member Muhammad Khan as he door-knocked for labor in Virginia on Wednesday. "Virginia is already blue; we don’t want it red again,”, photo by Camucha King

ARLINGTON — Since August, dozens of UNITE HERE hospitality workers have been knocking on tens of thousands of doors across northern Virginia, encouraging voters to elect Terry McAuliffe as Governor, Hala Ayala as Lieutenant Governor, and Mark Herring as Attorney General. With polls showing an increasingly close race between McAuliffe and his Trump-backed opponent, the Union is set to more than triple its efforts to its field operation by bolstering its number of canvassers to 200 — and knock over 200,000 doors in total.

“We must elect Terry McAuliffe, Hala Ayala, Mark Herring and Democrats up and down the ballot and fight for a just recovery in Virginia — and the way we do that is with our feet in the streets talking to voters about the bread-and-butter issues that matter to them most,”said D. Taylor, UNITE HERE International President. “November’s elections in Virginia are high stakes tests for Democrats in advance of the 2022 midterms. That’s why we need to ramp up our tried-and-true method of high-volume door-to-door canvassing in Virginia — which we know is the key to victory in close elections.”

“This is a close and critical race for hospitality workers — and it demands serious national attention,” said John Boardman, Executive Secretary-Treasurer of UNITE HERE Local 25. “The pandemic has devastated the hospitality industry, and more than ever workers need expanded healthcare, affordable housing, and elected allies to join our fight to create new union jobs in hotels and casinos across the state.”

“2020 showed us once again that when we fight, we win,” said Marlene Patrick-Cooper, President of UNITE HERE Local 23. “We need to double our efforts to win this political fight in November, make Virginia a great state to be a worker, and bring thousands more workers in airports, universities, and cafeterias into the union. Virginia 2021 can either be Michigan in 2016 or Georgia in 2020 — it all depends on how hard we are willing to fight for the working class in the Commonwealth.”

UNITE HERE ran the largest union door-to-door canvass of the 2020 presidential election and has a decades-long track record of organizing to deliver wins during election season and beyond. The Union also pioneered a safe, contactless canvassing program during the pandemic, and not a single canvasser contracted COVID as a result of campaigning.

The canvassers are focusing on working class neighborhoods — especially those populated by African immigrants that traditional campaigns often struggle to reach. Virginia has one of the largest populations of African immigrants in the country, many of whom are UNITE HERE members.

“I was laid off eighteen months ago while I was leading a campaign to improve conditions in my restaurant in Dulles airport,” said Aster Wordofa, a UNITE HERE Local 23 member, canvasser, and Virginia resident. “That didn’t stop me from fighting for a better life for myself and my family. I want to show my children how important it is to fight for things that matter to us, which is why I’m knocking doors for Virginia Democrats.”

“The last eighteen months have been incredibly painful for me and my co-workers. The pandemic forced my hotel — where I had worked for 33 years — into bankruptcy,” added Sayed Hussaini, a UNITE HERE Local 25 member, canvasser, and Virginia resident. “I still have bills to pay, including putting my kids through college, and I’m looking for a new Union job. I’m counting on Virginia Democrats to help me and my fellow workers with both.”

UNITE HERE is a labor union representing over 300,000 hospitality workers. 98% of its members were laid off at the start of the COVID-19 pandemic and as of summer 2021, over 60% remained out of work. In Virginia, UNITE HERE Locals 25 and 23 represent over 3,500 workers in hotels, restaurants, airports, airlines, cafeterias, and parking garages, as well as 8,000 Virginia voters.