Scranton Teachers Will Go on Strike

The Scranton Federation of Teachers, representing more than 800 teachers and paraprofessionals, announced today that it will set up picket lines and go on strike at 12:01 a.m., Nov. 3. The union has been working under a contract that expired in 2017 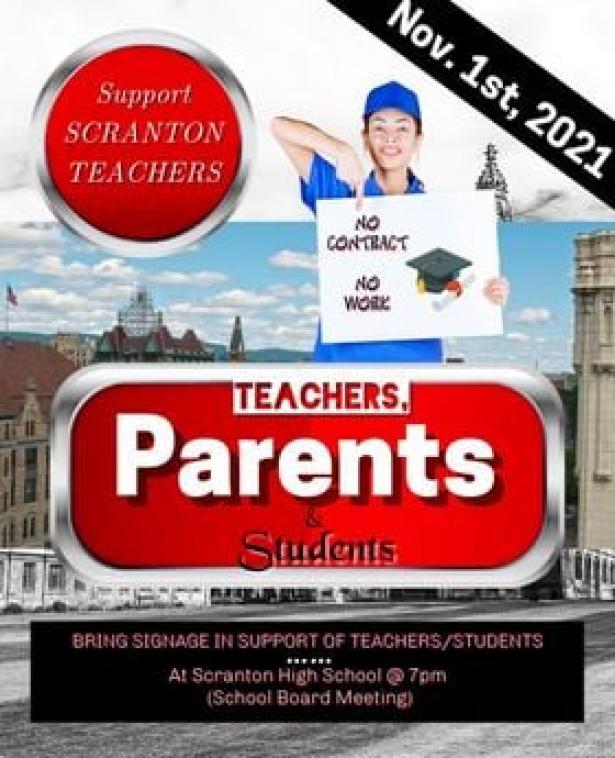 All Parents, Teachers & Students are encouraged to meet up at Scranton High School for the school board meeting Monday night. We need to take a stand as a community for our children’s education and their educators., Wear red to support our teachers. Please share!!! #WeSupportOurTeachers

A wave of labor activism is underway. Amazon workers in Staten Island in New York City are trying to organizing a union. Bloomberg News reports:

Deere & Co. employees, who launched a 10,000-person strike Oct. 14, cited the mandatory overtime that can stretch their shifts to 12 hours. At Kellogg Co., the union went on strike this month after decrying the toll of seven-day workweeks that had kept cereal flowing to stuck-at-home customers during the pandemic. And at Frito-Lay Inc., workers have this year challenged what they called“suicide shifts”: being made to leave late and return early, with only eight hours of turnaround time in between.

Scranton teachers announced their decision to strike on November 3.

SCRANTON, Pa.—The Scranton Federation of Teachers, which represents more than 800 teachers and paraprofessionals, announced today that it will set up picket lines and go on strike at 12:01 a.m., Nov. 3. The union has been working under a contract that expired in 2017.

“We’ve reached the end of the line and our patience with the Scranton School District. The district has refused to address our concerns about the slash-and-burn budget cuts that are significantly affecting the quality of education,” said Scranton Federation of Teachers President Rosemary Boland. “Strikes are always the last resort. We held off for many months, hoping, in vain, we could agree on conditions that are good for kids and provide decency, fairness, respect and trust for our educators.”

Boland expressed optimism that new members will be elected to the Scranton School Board on Nov. 2 and that the needs of students and educators finally will be prioritized.

SFT gave the district more than the required 48 hours’ notice before starting a strike. Picket lines will begin early Wednesday morning on Nov. 3 at most schools.

Teachers and paraprofessionals want realistic solutions to reversing the teacher turnover crisis; raising educator pay that has been frozen since 2016; returning Scranton’s esteemed and essential preschool program; and restoring libraries, bus routes and electives such as consumer[LBC1] science and music.

The austerity budget that is starving Scranton classrooms of the necessary resources, coupled with the administration’s disrespect for teachers, are issues reminiscent of what led to the walkouts in West Virginia, Oklahoma, Arizona, Colorado and Chicago in 2018 and 2019, SFT said.

“Teachers and paraprofessionals don’t want to walk out, but they will when their students’ needs are ignored and schools are starved of resources,” Boland said.

Scranton public schools are operating under a state Recovery Plan, which is akin to a state takeover.

“The Recovery Plan prioritizes financial recovery over student achievement, balancing the budget on the backs of students. Yet the plan has not been amended to factor in the $60 million in federal aid that should be used to stabilize the district and pay teachers decent, competitive wages,” she said, noting that the Recovery Plan originally factored in the use of “windfall funds,” such as federal aid when defining “recovery.”

“Since the recovery plan began in 2019, more than 100 teachers and paras have left the district, demonstrating a serious recruitment and retention problem that has harmful ramifications for students,” she said. Classes are severely overcrowded. Special education students are not being served adequately because teachers are pulled into other classrooms. Students aren’t getting individualized attention. In the COVID-19 environment, overcrowded classrooms pose a health hazard.

Boland said teachers and paraprofessionals deserve a pay raise. Teachers have not received a raise for more than four years, which has prompted many of the teacher defections to other school districts. Several paraprofessionals were furloughed, only to be brought back at a lower salary after public outrage. The district also is insistent on an inferior health scheme that would directly impact the Scranton community, as they are still dealing with the impact of COVID-19, the union said.

“It’s time for a contract that’s good for students and fair to educators,” Boland said.