Not in Our Town: Ephrata, PA Says No to Extremists

The struggle to protect children from covid by obeying mask mandates comes to a small town in Pennsylvania. How to build a coalition broad enough to beat back right-wing extremists. 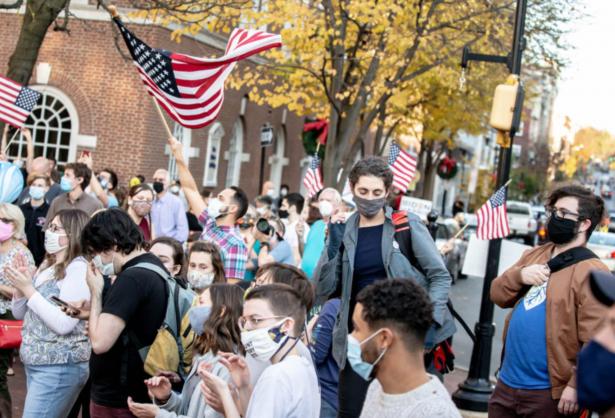 Life in Ephrata is not easy for working-class families. Our town of about 14,000 people in southeastern Pennsylvania has a poverty rate close to 12% and a per capita income of just above $28,000 a year. People know what it’s like to struggle to keep food on the table, and a roof over their heads. Most feel like they don’t have time to worry about politics. Besides, they feel left behind in the economy, and abandoned by government. Democrats and Republicans alike have betrayed working-class people. Like many in rural America, they embraced a leader who helped them make sense of their impossible situation; someone who offered them a warped form of populism that stoked fear and prejudice, steering them towards dogmatic allegiance to authoritarianism. The only people offering hope were far-right extremists.

But places like Ephrata are not beyond reach, as a small victory by Lancaster Stands Up shows.

This September, two dozen Ephrata residents – most of us concerned parents – gathered on a Zoom screen at 10:30 on a Thursday night. We were listening intently to the closing arguments ahead of a school board vote that promised to embroil our school district in a high-profile legal battle that the district was likely to lose. Our nine-member, all-Republican school board had recently voted against requiring masks in schools. The Pennsylvania Department of Health then mandated masks in all schools. Our school board was poised to sue to avoid the mandate.

The three weeks after the board vote against masking had been tumultuous. Concerned parents such as myself wanted our kids to stay safe from COVID in school, but the school board had sided with people who refused to take COVID seriously. School board meetings became chaotic, taken over by a group of vitriolic people who did not want to follow the mask mandate. One of our members, Rebecca Class-Branle, wrote that, “They screamed. They called anyone who tried to be a voice of reason hateful names. They disregarded the calls from the board that their time was up after four minutes, preferring instead to rant about right-wing extremist talking points. And when a doctor spoke urgently about the situation at our local hospital, they screamed, ‘lies’ and interrupted her.”

Our school board made it clear whose side they were on, with one school board member even applauding the lawlessness. They assured the extremists that they were doing everything they could to work around the mandate. Their message: “We’re on your side! We believe in the rights of parents to choose!” We left fearing for our safety and were appalled at the threatening language we were seeing online – including constant talk about the Second Amendment and going to war. But we got to work, preparing for the next meeting, the Zoom call where we gathered on that Thursday night.

WE PROTECT OUR KIDS

After more than 30 parents spoke out, it was close to 11pm. We held our collective breaths as the board president made his final comments. When the vote was taken, we cheered, clapped, and cried tears of relief: five to four. We had won! Our kids would be protected from COVID in their schools, and our school board would not be joining a ridiculous lawsuit.

We would go on to win another vote: instead of a signed note, parents would have to provide the school with a medical exemption form to opt their kids out of mask-wearing in school. Victories like these are unlikely in our dyed-in-the-wool Republican town, where many people never wear masks and refuse to social distance.

How did we win? By organizing everyday people, especially parents, using a populist narrative to build a coalition of working-class people who agreed on one thing: right-wing extremism goes too far, even for Ephrata. To be clear, this was one fight in the ongoing battle for our democracy, but it was an important one. The types of dangerous behavior we saw from the Trump administration and on January 6 had come home to our own community. And it was up to us to stop it. We knew that protecting our kids and our community was up to us; our elected officials had shown themselves to be pawns of extremists, and cared more about scoring cheap political points than making sure we all made it through the pandemic.

Since 2016 Lancaster Stands Up has been building working-class power in rural, small-town, and small-city Pennsylvania. We joined forces with other groups in 2019 and formed Pennsylvania Stands Up. Our members overwhelmingly endorsed Bernie Sanders in the 2020 election, and then played an important part in defeating Donald Trump in Pennsylvania in the general election. Lancaster Stands Up is made up of hundreds of dues-paying members who believe that democracy is up to all of us. We believe in our community and in each other, and we brought that faith to the fight against extremism in our school boards.

‘THIS IS NOT HOW WE DO THINGS HERE’

We live in a county that is controlled by Republicans. To get out of partisan frameworks, we use populist language to talk to our neighbors. From the beginning of this fight, we decided that we would use language that speaks to everyday working people. We knew what would not work: elitist language that accused our opposition of being ignorant of the science behind COVID, too “country hick” to believe in vaccines, and the like was counter-productive. Instead of ”punching down” at our neighbors, we would punch up at the people in charge: the school board.

First, we needed to establish that we were on the popular side. This was a daunting challenge, considering that we were outnumbered about 150 to 12 at the first school board meeting. The numbers were decidedly against us. Moreover, our opposition was energized—motivated by their loss in the 2020 election. These were not average parents: they were part of the dangerous right-wing organization, “Free PA.” This organization had been surging in Pennsylvania since August 2020, and had played a role in the January 6 attack on the Capitol. Since then, they had been organizing in countless small towns all over Pennsylvania, using a militant mixture of Christian Nationalism and right-wing extremism to begin attacking school boards.

We recruited volunteers and spent three weeks blasting emails and letters to the school board. Every week, we wrote letters to the editor of our local paper, because we knew that the paper reached thousands of people in Ephrata, far more than we could on our own. All of our public communication focused on three values: we wanted our kids to stay safe, we wanted parents to be able to work without constantly quarantining, and we loved our neighbors enough to protect them by wearing a mask.

Second, we drove a wedge between the right-wing extremists and the rest of our town and forced our school board members to pick a side.

We knew we had to spotlight the dangerous trend towards extremism in our rural town. Many of our letters to the editor condemned the raging outbursts by the extremist group at public meetings as un-American. “This was not how we do things in Ephrata,” we wrote. Writing about how dangerous our opposition was gave us an opportunity to juxtapose their actions against the community values we had already established in our public communications. We wrote about how we had all sacrificed precious time with our friends and family to keep each other safe. Working families had done their part to support our community. Now, we were asking for our community to do the same thing for our kids. These people weren’t just refusing to follow basic COVID mitigation guidelines: they were attacking our values with their aggressive and reckless behavior.

Third, we made masks patriotic. You read that right: we would be more patriotic than our Trump-loving, gun-toting opposition. Lancaster Stands Up’s slogan is “America is for all of us.” We wouldn’t let our opponents monopolize the powerful symbol of the flag. It was ours too. We would use it on all of our posters, flyers, social media outreach, and even the masks we wore in public. If you were on the side of COVID safety, you were holding, wearing, or flying a flag. Patriotism was doing everything you could to make sure everyone made it through COVID intact. We knew, and we made sure our neighbors knew, that our economy would not recover unless we worked together. It was time to ask, “What can we do for our community, together?” not, “What’s in it for me?” Taking care of our neighbors was the right thing to do, and the patriotic thing to do.

It worked. Community members started speaking up about the extremism. The press picked up on the story and started writing about our school board meetings. We started hearing from unlikely people—Trump voters who had changed their minds, business owners, non-voters, faith leaders, and even elected officials. And many of them wanted to help.

We showed volunteers how to recognize allies and how to recruit them. We trained them how to talk about shared values, and how to punch up at the people making the rules, not at our neighbors.

The opposition quickly became defensive. They had overplayed their hand and their agenda had come to be popularly viewed for what it was: extremism. Their inside man, a school board member, had a Brett Kavanaugh-esque rant at a school board meeting that resulted in several board members siding against him. His subsequent change in demeanor wasn’t enough to win them back.

We succeeded in convincing the school board not to sue over the mask mandate because we organized everyday working people in our community to win a policy that kept our community safe. We met allies where they were; they didn’t have to learn a special vocabulary or agree with us on everything to take action with us. Did they believe the same way Lancaster Stands Up did about housing, healthcare, immigration, and LGBTQ+ rights? Not yet. Did we need their help to keep our community safe from COVID? We sure did. And because we made a strategic choice to link arms with them, we were able to build a coalition broad enough to beat back far-right extremists. And we believe that deeper transformation of beliefs becomes possible when people are in struggle together.

We know that the extremism prevalent in today’s Republican party will not stop at mask bans. School board meetings have become a forum to attack racial equality and LGBTQ+ rights in small towns all across America. To defeat them, we will need a strategic plan that captures the broad support of our neighbors. We must abandon the faulty argument that winning in rural America is hopeless. We cannot afford to leave rural America to be overrun by far-right extremists. The fight for our democracy, shabby as it may be, has come home to small town America. We are in danger of losing our local, state, and federal governments to fascists who are trying to force their will, on threat of violence, on the rest of us.

“Our character is measured by moments of great adversity; whether we collapsed under the fear and vitriol of the loudest voices, or instead saw how history might look at this moment, and courageously chose the hard path, determined out of love for our community,” said Lancaster Stands Up member Josh Smith. We can create a better world – if we act.

Suzy Wurtz (@suzy_wurtz) is a working-class mother of two and a community organizer with Lancaster Stands Up in Lancaster County, PA.

Organizing Upgrade is a political project in support of the movements for multi-racial democracy.