Schumer, Jeffries Urged to ‘Hold the Line’ for the Working Class 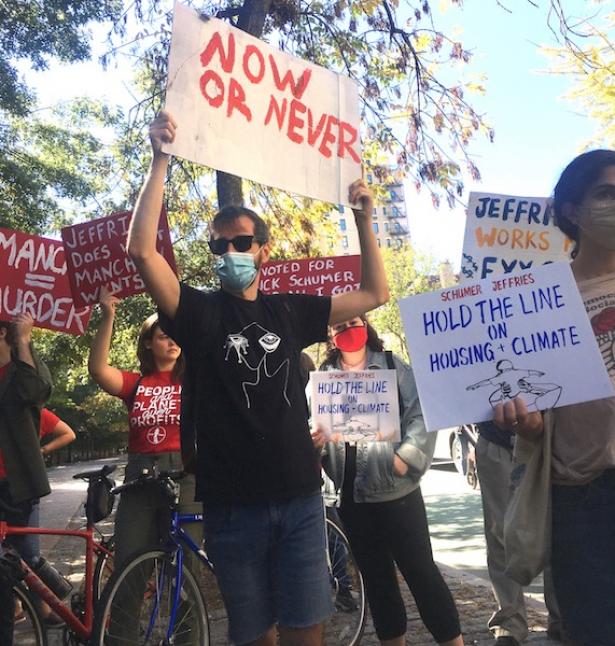 Despite public opposition, key elements benefitting the working class are being gutted from the Biden Administration’s Build Back Better plan.,

Brooklyn, NY – Housing rights advocates and climate emergency activists across the nation are in crisis mode, desperately urging lawmakers to “hold the line” against noisy efforts from both sides of the aisle to gut key provisions in Biden administration’s incredibly shrinking $3.5 trillion Build Back Better reconciliation bill aimed at uplifting America’s working class.

The Pentagon, meanwhile gleefully sprinkled an extra $10 billion on top of its annual $725.8 billion military budget without a peep out of any of congressional naysayers Joe Manchin, Kyrsten Sinema, Josh Gottheimer, et. al.

“This is people’s futures we’re talking about — people’s livelihoods, and it’s not worth negotiating,” Abigail Ng, policy and communications coordinator for the Tenants & Neighbors, a grassroots membership organization dedicated to affordable housing in New York City, told LaborPress on Wednesday, Oct. 20.

About 10 other advocacy groups agitating for transformative action on climate justice and housing rights joined Ng’s group in a rally outside Senate Majority Leader Chuck Shumer’s posh Prospect Park West apartment in the borough of Brooklyn.

“Housing is not something that can just be cut on the budget to save on costs,” Ng continued.

[Unquestioned money for war] shows where their priorities are — where people put their money, where our representatives put their money, and put our tax money — that shows what they value. Clearly, because we have to fight for it, it shows they don’t value housing as much.”

“Obviously, there’s no future without a healthy climate,” she said. “I think it’s ridiculous. I think it’s a complete failure. I really don’t understand why these people are in public office if all they care about is the donations they get from industries, and not the people that they work for. I honestly think it’s pretty psychopathic to hear what the science is saying [about climate catastrophe] and then go ahead and ignore it. It’s infuriating.”

The U.S. military machine is, and has been for a long while, the largest polluter on the planet, consuming more oil and emitting the more carbon dioxide [C02] than any other entity.

Lack of affordable housing, poverty, low-wages and unemployment have thrust more than half-a-million people into homelessness across the United States. According to the U.S. Interagency Council on Homelessness, that trend has only been increasing over the last four years.

Despite that, housing, along with other life-saving provisions inside the reconciliation bill, are being threatened with the chopping block — all in the name of “fiscal sanity.” 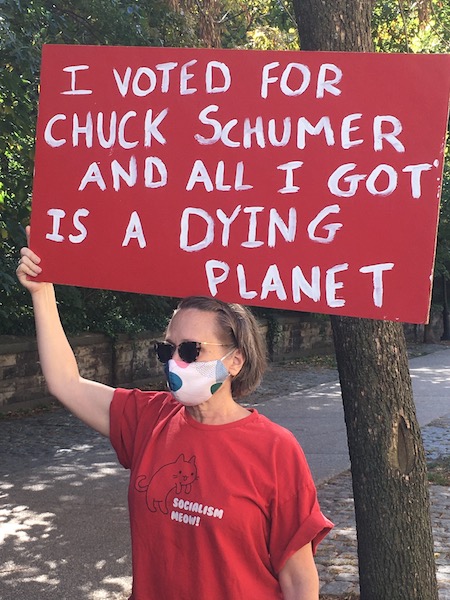 Lawmakers, however, find nothing insane about spending $66 billion in preparation for some future war with China in the Indo-Pacific region.

“It is incredible to see how they think they can play with our lives and the dignified living that we deserve — and they do it right in front of us by lying to us, and not taking the stands that they had promised to be taking,”  Estefania  Galvis, Workers Development Director at NICE – New Immigrant Community Empowerment, told me.

NICE is a NYC-based non-profit advocating for vulnerable immigrants — many of them from the perilous building and construction industry — jobs that are especially deadly to Latino workers.

Across the United States, Latino worker fatalities in all industries have increased nearly 18-percent over the last six years.

“People’s lives are on the line, right now, especially, undocumented people,” Galvis added. “We saw it with the storm that happened [in New York City] a couple of weeks ago; we have seen it on the border; we have seen it in the [detention center] camps — immigrants that are undocumented don’t have any human rights in this country — and neither do working class people.”

Demonstrators outside Schumer’s residence also reserved a good dose of their anger for the longtime Democratic Party powerbroker himself and fellow New York congressional delegation member Hakeem Jeffries for not doing enough to confront the climate crisis and being too cozy with the fossil fuel industry.

Jolliffe also took aim at the mainstream corporate media outlets for focusing on all the in-fighting and politics surrounding the Build Back Better plan, instead of “what’s actually in the bill.”

“I just think there are failures happening all around,” she said. “The climate component is most important personally. I’m a person who comes from a place privilege, but there’s also lots of other things in there that will help people living paycheck-to-paycheck.”

One of the things the Build Back Better plan seeks to do is extend existing child tax credits for another three years. The child tax credit, expanded last March, is presently providing pandemic-stricken American families with limited financial relief — up to $300 per child.

Joe Manchin is attempting to undermine the entire relief effort by insisting families be subjected to a work requirement and a $60,000 income cap in order to qualify for monthly aid.

The $725.8 billion military budget that was approved last week, without any muss or fuss, is $29 billion more than than was allocated last year.