The annual shopping frenzy will be underscored by an international day of protest against what activists say are unfair labor practices. 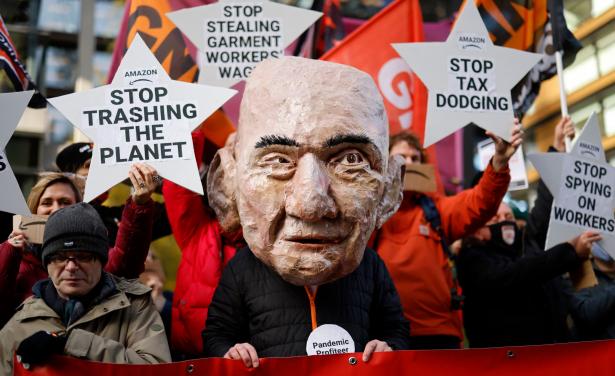 The American holiday calendar traditionally sees our annual day of gluttony succeeded by the most excessive 24 hours of shopping and deal-slashing that 21st-century capitalism can conjure. But this year, Black Friday may, ahem, strike another tone, as a global coalition of activists and workers plan to use the day for collective action, with a day of strikes and protests spread across 20 countries.

Their message signals a shot across the bow at one target in particular as it gears up for one of its busiest days of the year: e-commerce giant Amazon. The demand? That Amazon “pays its workers fairly and respects their right to join unions, pays its fair share of taxes and commits to real environmental sustainability,” according to a press release from the Make Amazon Pay Coalition, a group of over 70 trade unions and international advocacy organizations such as Greenpeace, Oxfam, and 350.org. Last year, the organization was started with a day of Black Friday protests spread across 16 countries.

This year, the Make Amazon Pay coalition’s international day of action comes as labor agitation is intensifying in the United States, with high-profile strikes kicking off last month and continuing into recent days.

Asked about the planned Black Friday actions, Amazon spokesperson Kelly Nantel said in an emailed statement, “These groups represent a variety of interests, and while we’re not perfect in any area, if you objectively look at what Amazon is doing in each one of these areas you’ll see that we take our role and our impact very seriously.”

Goodbye, Striketober! Hello, Strike-vember: Last month, labor organizers and media outlets made a lot of noise about “Striketober,” when more than 10,000 John Deere workers walked off the job (before later reaching an agreement), and 60,000 TV and film production workers were poised to strike until a last-minute contract resolution averted the stoppage.

The agitation continues to spread nationally since then: The Labor Action Tracker from Cornell University’s School of Industrial and Labor Relations, which tallies any strike or protest consisting of two or more people in the US, has tracked 307 strikes as of November 23.

The Make Amazon Pay initiative will be global in scope, involving warehouse workers in France, delivery drivers in Italy, and garment workers in Bangladesh and Cambodia, according to a report from Vice and the coalition’s website. In the US, actions coordinated by the Athena Coalition, a group of economic and social justice organizations, will focus on Whole Foods and Amazon through a variety of events, spokesperson Jason Schwartz confirmed to HR Brew.

The group’s efforts will include “a week of actions with Whole Foods workers in Massachusetts,” a town hall for warehouse workers in Chicago, and an “online event with labor and community leaders” in Southern California, Schwartz wrote in an email

Remember the rules. Amazon has long faced criticism from some employees and former workers over reported treatment of warehouse workers, and what labor organizers allege is outright hostility toward attempts to unionize. In April, the National Labor Relations Board determined that Amazon had illegally terminated two employees who publicly complained about Amazon’s labor practices, and the company later agreed to a settlement with the fired workers.

Employees are legally entitled “to engage in other concerted activities for the purpose of collective bargaining or other mutual aid or protection,” as explained in Section 7 of the National Labor Relations Act. (Read more here about the NLRB rules when it comes to employee organizing.)

Big picture: A report from the Strategic Organizing Center noted that in 2020—when the company increased its number of warehouses in response to the pandemic-driven demand in online shopping—Amazon workers were injured at a rate “nearly 80% higher than the serious injury rate for all other employers in the warehousing industry in 2020.” Amazon spokesperson Kelly Nantel responded to the report with a statement acknowledging that “any incident is one too many” and pointing out the company's spending on worker-safety initiatives.

The Make Amazon Pay Coalition intends to highlight many of these issues. In a statement published online, Christy Hoffman, the general secretary of UNI Global Union, one of the organizations sponsoring the events, said, “On global action days like Black Friday, we are seeing how the movement pushing to change the rules of our economy and challenge corporate power is growing bolder and stronger.”—SB