If Trump Voters Lived in Germany, They’d Be in the Fascist Party

A recent global poll, which came to my attention via the Liberal Patriot, framed the political choice facing the public in an interesting way. It asked which position comes closest to the poll taker’s own belief. 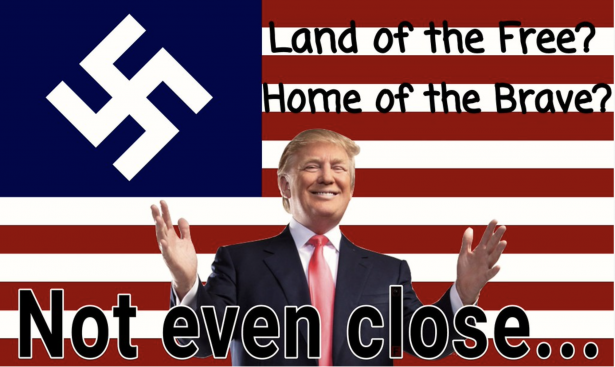 Land of the #Free? Home of the #Brave? Not even close... Today, I am ashamed to be an American. by Effnheimr, This image was marked with a CC BY-NC-SA 2.0 license.

A recent global poll, which came to my attention via the Liberal Patriot, framed the political choice facing the public in an interesting way. It asked which position comes closest to the poll taker’s own belief: “We need to be vigilant against groups trying to impose new cultural values and views about religion, gender, immigration, or race that don’t reflect our society’s traditional values” or “We need to be vigilant against groups that undermine democracy by attacking judges, questioning election results, and promoting societal unrest based on conspiracy theories, racism, and anti-scientific claims about vaccines and climate change.”

The question, in other words, is whether threats from the social and cultural left are more serious than threats from the conspiratorial and illiberal right. What is perhaps even more revealing was the split among voters in different right-of-center parties. Supporters of the British Conservative party were split almost evenly between fearing cultural change and fearing right-wing extremism. Supporters of the Christian Democratic parties in Germany deemed the far right a much larger threat. But Trump voters, on the other hand, took a dramatically more conservative stance, deeming the cultural left a bigger threat than the far right by overwhelming margins. 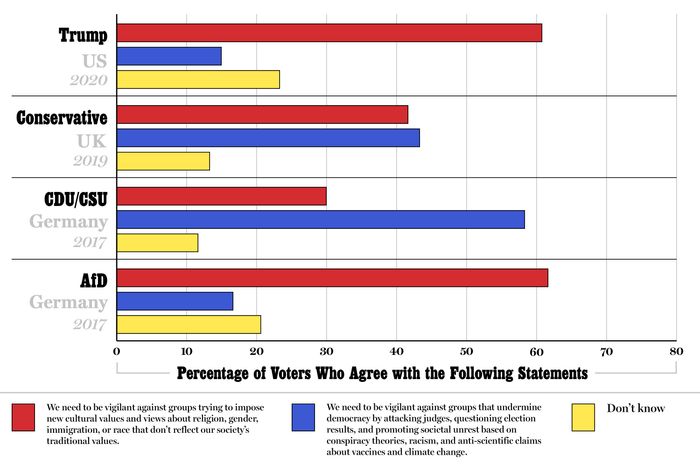 Indeed, if you want a comparison to the Republican perspective, you can only find it in a far-right party like Germany’s AfD, an extremist faction that has combined attacks on immigration with unsettling revisionism around the condemnation of the Third Reich that has been a foundation of Germany’s postwar political consensus.

The Republican party is an extremist outlier in comparison with major conservative parties in other democracies. That radicalism has been most evident in the GOP’s unique anti-statism: No other mainstream party categorically opposes new taxes under any circumstances, universal health insurance, or government action to limit greenhouse gas pollution. This poll illustrates a dimension that has come to the fore in the Trump era: a fixation with politics as a venue for existential cultural conflict.

American conservatives have believed for decades that liberalism represents a threat to American liberty that cannot be contained solely through democratic channels. The conviction dates back to the shattering experience of the New Deal and the right’s inability to win it back, and found expressions through spasms of reaction ranging from McCarthy to Nixon to the Gingrich tactics of government shutdowns and total war. During Obama’s first term, the Republicans we now see as sober and reasonable were making hysterical predictions like “America is approaching a ‘tipping point’ beyond which the Nation will be unable to change course” (Paul Ryan) and “We are only inches away from no longer being a free economy” (Mitt Romney).

Trump’s influence on the party has been to draw this belief to the fore and make it the party’s defining principle. Trump beat out his Republican primary rivals by positioning himself as the candidate who would fight most ruthlessly against their enemies.

But the emergence of Trumpian authoritarian sentiment can be seen most clearly in the changes in the party’s intelligentsia. Trump was an alien figure to the conservative movement elite, much of which resisted him and then accepted him as only a lesser evil.

The mismatch between the Republican voters’ adoration for Trump and the movement elite’s concealed disdain has created a demand for new, Trumpier intellectuals. It has been filled by new organs, such as the Journal of American Greatness — which recently suggested Dr. Fauci should be locked in a “federal penitentiary” for his “crimes against humanity” and “ghoulish experiments” — and the creation of slogans like “National Conservatism,” apparently aimed at reactionaries who believe the main problem with National Socialism was the socialism.

David Brooks attended a recent conference on “National Conservatism” and had difficulty summing up its beliefs other than a shared hatred for the left and determination to fight it by any means necessary. The National Conservatives express some disagreement with the party’s anti-statist tilt, but their sense of using state power to improve people’s lives is at best inchoate. Josh Hawley has proposed to “break up Twitter,” apparently in revenge for the platform kicking out Trump.

The most revealing quotes about National Conservatism come from conventional Republicans trying to capture its spirit. “The left’s attack is on America. The left hates America,” said Ted Cruz. “It is the left that is trying to use culture as a tool to destroy America.” Marco Rubio added, “We are confronted now by a systematic effort to dismantle our society, our traditions, our economy, and our way of life.”

The Republican leadership has given up any hope of containing these beliefs and is instead harnessing them for its own uses. A recent Washington Poststory details harrowing efforts by Trump loyalists to take control of boards and offices assigned to govern elections. Those Republicans not actively supporting these efforts are mostly just shrugging them off. “Most people in Mississippi are concerned about gas prices, COVID overreach. I think candidates are making a mistake getting in those weeds,” Henry Barbour told the Post. “I don’t hear people in Mississippi talking about whether the election was or wasn’t stolen.” Barbour’s advice amounts to wishing the Trumpists would have the good sense to plan their next coup more quietly.

The same dynamic is on display in Congress. The Republican party has a vocal wing of utterly unhinged paranoids, including Marjorie Taylor Greene, Lauren Boebert, and Paul Gosar. When a couple of the mainstream conservatives called out the racism and all-around nuttiness of the extremist wing, the party leadership, rather than siding with them, has called on both sides to knock it off and work together as a team.

There is a deep desire within the political Establishment to believe control of the Republican party remains in the hands of responsible small-d democrats. But every day provides fresh evidence to the contrary.