It’s not the nuclear deal that’s the problem for Tel Aviv, but the very idea that Washington and Tehran would reach any detente at all. 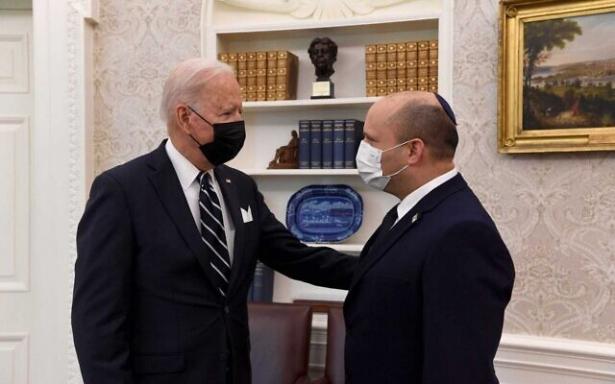 Prime Minister Naftali Bennett, right, speaks as he meets with US President Joe Biden in the Oval Office of the White House, Friday, Aug. 27, 2021, in Washington. , GPO

The New York Times Friday published an important analysis of ongoing U.S.-Israeli tensions over Washington’s efforts to revive the 2015 nuclear deal with Iran, the Joint Comprehensive Plan of Action, which had succeeded in curbing Tehran’s nuclear program. As helpful as it is in understanding where things stand between Washington and Tel Aviv, however, the article misses a more fundamental takeaway from recent developments: Biden’s immense efforts to appease Israel in hopes of tempering the latter’s opposition to the JCPOA have not only failed but were likely based on faulty assumptions and were thus a mistake from the outset.

Diverging Israeli and American views on the JCPOA is nothing new. But senior officials on the Biden team thought President Obama could have handled the Israelis better by coordinating more closely with Prime Minister Benjamin Netanyahu and actually heeding some of his hawkish advice. This belief, however, is unfounded.

The fundamental question is this: Are Israel and America’s views on a negotiated settlement with Iran ultimately reconcilable or not? Was there— and is there now — a way to clinch a lasting deal with Iran on its nuclear program that also satisfies Israel?

The answer lies in understanding that the details of the deal are not the real problem. It’s rather the very idea of Washington and Tehran reaching any agreement that not only prevents Iran from developing a bomb, but also reduces U.S.-Iran tensions and lifts sanctions that have prevented Iran from enhancing its regional power.

Many of Washington’s partners in the Middle East worry more about a U.S.-Iranian rapprochement and its geopolitical implications — a likely tilt in the regional balance of power in Iran’s favor, especially given the widespread perception the United States is eager to extricate itself from the neighborhood — than Iran’s nuclear advances. “So long as the United States works to contain Iran’s political influence and undermine its economy,” I wrote in Foreign Affairs in February, “the balance of the region will artificially tilt in favor of these states — a tilt that their own power cannot sustain.”

Indeed, Obama’s fruitless efforts to persuade Washington’s regional partners and their allies in Washington to go along with the JCPOA had demonstrated that no amount of deference or consultation could change their categorical opposition to a deal with Iran. To the great frustration of some former Obama officials who had gone through this experience, the Biden team thought they could square this circle.

In December 2020, Obama’s deputy national security adviser, Ben Rhodes publicly implored Biden not to repeat this mistake: “I plead with [Biden],” he said on the PodSaveAmerica podcast. “Do not think there is any ounce of good faith that will be coming your way from Bibi Netanyahu, from MBS, and from the Tom Cottons of this world. These people have no interest in a deal. They’ve never had an interest in a deal,” he declared. “How many times do we have to go through this play? This is in the hands of the Biden people to say: ‘We don’t need to listen to these people.’”

But Biden chose to listen to them. Instead of returning to the JCPOA in the first days and weeks of his administration, critical time and effort were spent trying to persuade Israel, Saudi Arabia and the UAE to get onboard with diplomacy.

Netanyahu never budged an inch, although when Prime Minister Naftali Bennett succeeded him, Biden was encouraged by scoring some early wins. Bennett agreed, for example, to refrain from publicly attacking Biden’s diplomacy and play to Republican anti-Iran foes, as Netanyahu had done, thus making the U.S.-Israel relationship a partisan issue. (Bennett also agreed to coordinate Israel’s attacks on Iran with Biden, but more on that later.)

As soon as negotiations entered a decisive phase earlier this month, however, Bennett began to renege on the agreement and didn’t hesitate to publicly voice his opposition to Biden’s desire to revive the JCPOA. At this point, it should have been clear that Bennett, like Netanyahu before him, was not about to give ground.

Yet, Biden has continued to try to appease Israel. The Times reports that Biden began ramping up Trump’s “maximum pressure” sanctions (which Biden officials had always insisted were counterproductive) and issued military threats in an apparent effort to calm Israel.

This line in the Times’ piece nails the folly of Biden’s efforts: “Despite the tougher American talk, Israeli officials left worried that the diplomatic outreach to Iran would continue.” Indeed, Israel’s greatest worry is that diplomacy succeeds, not that it fails.

“Israeli officials have not been reassured,” The Times’ account continues. “They are increasingly concerned that the United States will eventually reach a deal with Tehran and then seek to block Israeli intelligence services from carrying out covert sabotage attacks.” The article goes on to report that Israel now seeks a “guarantee” that Washington will not seek to restrain their sabotage campaign, even if the JCPOA is restored.

So Israel wants to be able to continue to attack Iran even after, in Washington’s eyes, Tehran’s path to a bomb has been successfully blocked. (Given Biden’s refusal to provide Iran with assurances that the United States will keep its word and stay in the JCPOA beyond his own term, it will be interesting to see if he offers Israel a guarantee that it can continue to attack Iran even after the JCPOA is restored.)

But let’s return to Biden’s earlier deal with Bennett. The Times discloses that Israel “consulted” with Washington before launching two covert strikes against Iran in June and September. The piece doesn’t reveal if the U.S. tried to stop Israel.

Regardless, in Tehran’s eyes, this will likely confirm its view that Israeli sabotage is not acting contrary to U.S. strategy, but rather, that these attacks are a component of America’s broader strategy on Iran. Tehran presumably sees the Israeli attacks as Washington’s efforts to pressure Iran as part of Biden’s continuation of Trump’s policies.

Similarly, Biden has viewedattacks by Iraqi militias on U.S. troops as having been ordered or approved by Iran, even though U.S. officials have admitted that Iran’s control over these same militias diminished sharply after the January 2020 assassinations of the IRGC’s Qods Force commander, Gen. Qassem Soleimani, and Abu Mahdi al-Mohandis, the head of Iraq’s Popular Mobilization Forces.

U.S. officials have told me that one reason Biden chose not to return to the JCPOA quickly after his inauguration was due to Iraqi militia attacks on U.S. troops in January of this year. While the U.S. knew of no evidence that Iran had ordered the attacks, U.S. intelligence  also saw no evidence that Iran had tried to prevent them. If the United States interprets such attacks in this way despite the lack of evidence, it is fair to ask how Iran will interpret Israeli attacks on Iran that, according to U.S. media, followed “consultations” with Washington.

A final point: There is a curious passage in the Times piece. “American officials believe that so long as Iran has not moved to develop a bomb it does not have a nuclear military program, since it suspended the existing one after 2003. Israeli officials, on the other hand, believe that Iran has continued a clandestine effort to build a bomb since 2003.” If true, has Israel shared that intelligence with Washington? If so, it has failed to persuade the CIA  and the International Atomic Energy Agency. If it hasn’t been shared, why not? And why did the Times choose to publish this rather inflammatory allegation without investigating these very basic— not to say critical — questions?

The moral of the story is this: U.S. and Israeli interests on Iran diplomacy are irreconcilable. Biden’s efforts to square the circle have predictably failed. Biden must choose whether he will pursue America’s interest or Israel. This should not be a difficult choice.

Trita Parsi is an award-winning author and the 2010 recipient of the Grawemeyer Award for Ideas Improving World Order. He is an expert on US-Iranian relations, Iranian foreign policy, and the geopolitics of the Middle East. He has authored three books on US foreign policy in the Middle East, with a particular focus on Iran and Israel. In 2021, he was named by the Washingtonian Magazine as one of the 50 most influential voices on foreign policy in Washington DC, and preeminent public intellectual Noam Chomsky calls Parsi “one of the most distinguished scholars on Iran.”

His first book, Treacherous Alliance: The Secret Dealings of Iran, Israel and the United States (Yale University Press 2007), won the silver medal winner of the 2008 Arthur Ross Book Award from the Council on Foreign Relations. His second book, A Single Roll of the Dice – Obama’s Diplomacy with Iran (Yale University Press) was released in early 2012 and was selected by Foreign Affairs journal as the Best Book of 2012 on the Middle East.

Parsi’s latest book – Losing an Enemy: Obama, Iran and the Triumph of Diplomacy (Yale University Press, 2017) – reveals the behind the scenes story to the historic nuclear deal with Iran.

Parsi was born in Iran but moved with his family at the age of four to Sweden in order to escape political repression in Iran. His father was an outspoken academic who was jailed by the Shah and then by the Ayatollah. He moved to the United States as an adult and studied foreign policy at Johns Hopkins’ School for Advanced International Studies where he received his Ph.D. under Francis Fukuyama and Zbigniew Brzezinski.

He is the co-founder and former President of the National Iranian American Council. Parsi has followed Middle East politics through work in the field and extensive experience on Capitol Hill and at the United Nations. He is frequently consulted by Western and Asian governments on foreign policy matters. Parsi has worked for the Swedish Permanent Mission to the UN, where he served in the Security Council, handling the affairs of Afghanistan, Iraq, Tajikistan, and Western Sahara, and in the General Assembly’s Third Committee, addressing human rights in Iran, Afghanistan, Myanmar, and Iraq.

He is fluent in Persian/Farsi, English, and Swedish. Parsi’s articles on Middle East affairs have been published in the Washington Post, Wall Street Journal, New York Times, Los Angeles Times, Financial Times, Jane’s Intelligence Review, the Nation, The American Conservative, the Jerusalem Post, The Forward, and others. He is a frequent guest on CNN, PBS’s Newshour, NPR, the BBC, and Al Jazeera.

The Quincy Institute for Responsible Statecraft promotes ideas that move U.S. foreign policy away from endless war and toward vigorous diplomacy in the pursuit of international peace.