West Side Story: The Next Chapter

“I am very proud. I think it’s a huge step forward ... what this whole production has done is kind of lead by example and I think this is just opening doors, so many doors, for future actors from the Latinx community." 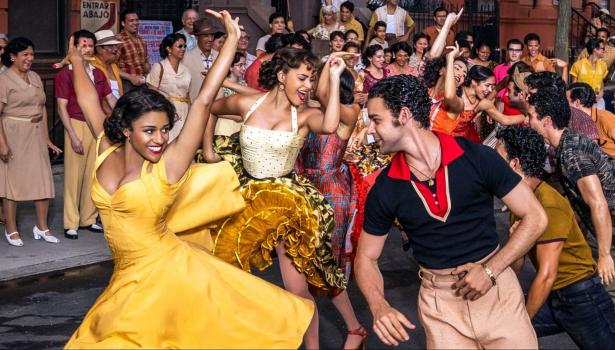 "Life is alright in America; if you're 'all white' in America" -- Ariana DeBose (left) is Anita and David Alvarez is Bernardo in Steven Spielberg's new version of “West Side Story.” , Photo courtesy of The Walt Disney Company

It was September of 1957 when the Puerto Rican Sharks and native-born Jets first rumbled on a Broadway stage in a breakthrough musical called “West Side Story.”

In the 64 years since, there have been countless stage performances and a memorable 1961 film that won 10 Academy awards, including one for Rita Moreno, the first Latina to win an Oscar. And now, Broadway’s most recognizable Latino characters, Maria, Anita, Bernardo and Chino, are back in a new film adaptation of the story based on William Shakespeare’s “Romeo and Juliet.”

“‘West Side Story,’ means so much to so many,” director Steven Spielberg said of the original musical written by Arthur Laurents, in his notes about the film shared with reporters.

Its theme of ethnic conflict, show-stopping choreography and songs like “Tonight,” and “Somewhere,” with lyrics by Stephen Sondheim and music by Leonard Bernstein, have become part of the nation’s history.

“It’s a story that has captivated audiences for decades. It’s not just a love story, but also a culturally significant work with a central premise––that love transcends prejudice and intolerance,” Spielberg said.

His fresh take on “West Side Story” does not compete with the 1961 film. It’s closer to Shakespeare's original.

“We wanted to discover our voice so that (the new film) would be the same, but distinctly different,” Spielberg added. “This is ‘Romeo and Juliet,’ but it’s also a very relevant allegory for what’s happening along our borders and for the systems in our country that reject anyone who isn’t white. That’s a big part of our story.”

"Life is alright in America; if you're 'all white' in America"

The 2021 movie recounts the seemingly timeless tale of a New York City turf war between the Jets and the Sharks against the backdrop of a star-crossed romance between Puerto Rican Maria and Tony, who is white. This new version is told from a 21st century perspective, complete with a surprising plot twist and an emphasis on realism.

“I wanted to cast it authentically, to ensure that the actors playing the Shark boys and girls were one hundred percent Latinx, and young,” said Spielberg.

Rachel Zegler, a Colombian American, plays Maria, while Ansel Elgort stars as Tony.  David Alvarez, a Cuban Canadian, is Bernardo, and Ariana DeBose, who has Afro Puerto Rican roots, was cast as Anita. Josh Andrés Rivera plays Chino. Rita Moreno is a Hollywood link between the original movie and this version. She now serves as an executive producer and portrays Valentina, a new character. 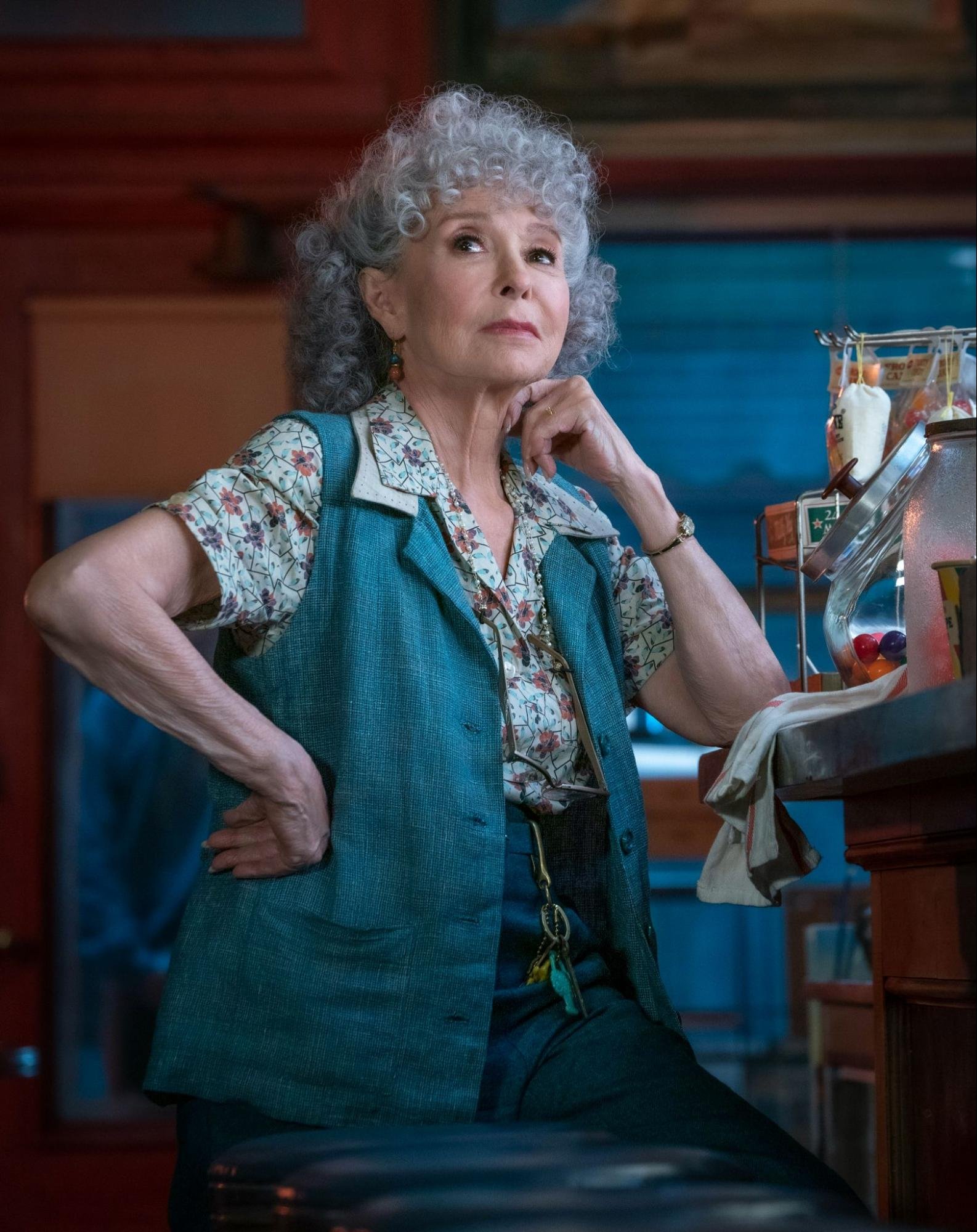 Rita Moreno won an Oscar for her portrayal of Anita in the 1961 version of “West Side Story.” In Spielberg's film, she returns as an executive producer and a new character, Valentina.  Photo courtesy of The Walt Disney Company

A STEP TOWARD GREATER INCLUSION 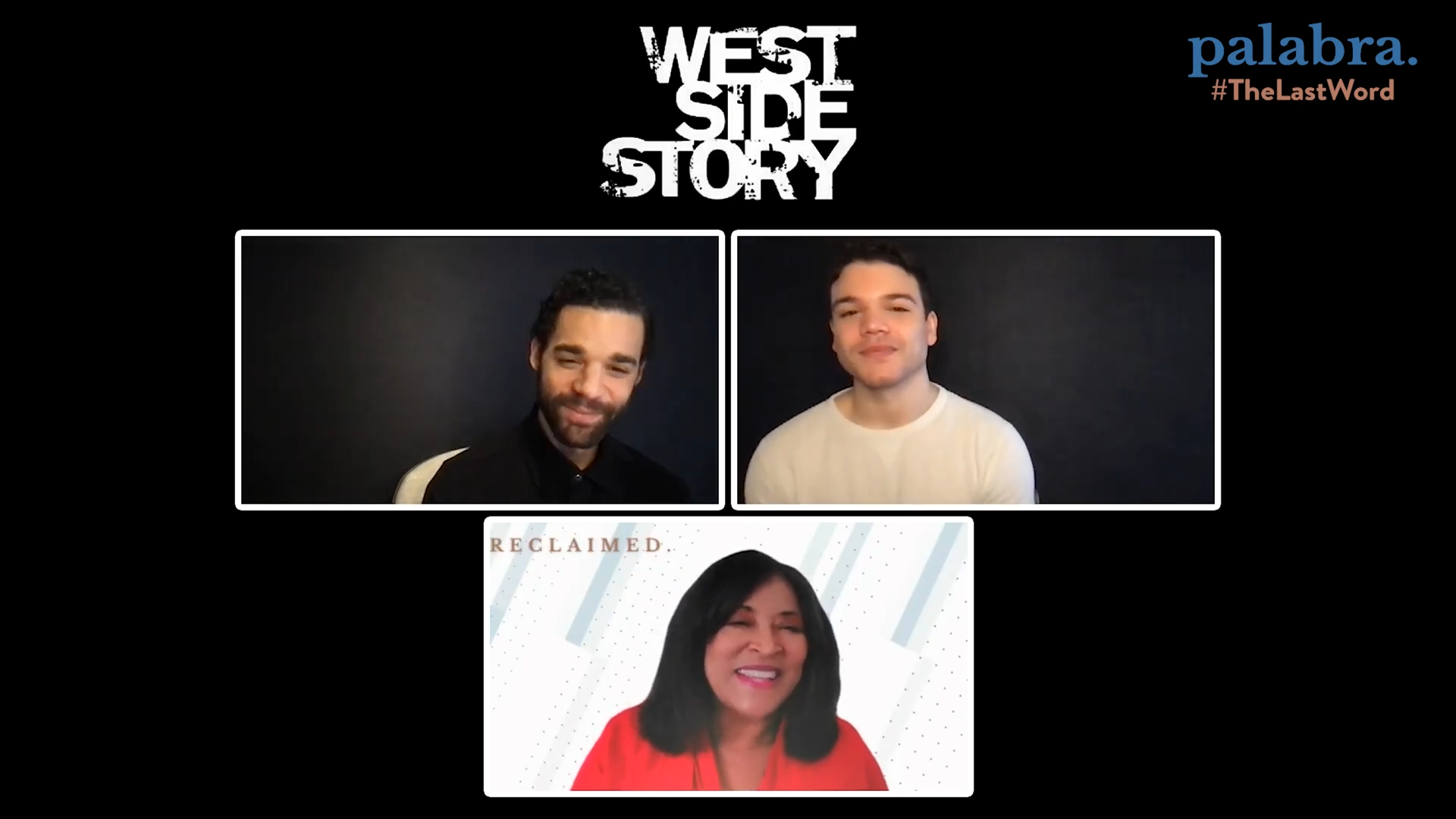 In a conversation with palabra, cast members opened up about the opportunities and the responsibilities of their involvement in the new “West Side Story.”  “I’m the first Latina to play Maria on screen,” Zeglar said. “That’s a huge thing that’s a part of a legacy of a very important musical for so many people. That’s not lost on me.”

Josh Andrés Rivera said the casting and production were handled with sensitivity.

“I am very proud. I think it’s a huge step forward,” Rivera said “What Steven Spielberg has done and what this whole production has done is kind of lead by example and I think this is just opening doors, so many doors, for future actors from the Latinx community.”

Along with the casting choices, the 2021 movie pushes the envelope with its use of language. The new “West Side Story,” has unexpected snippets of Spanish, delivered without subtitles.

“There were some subjects where it would be very natural for someone who is born speaking Spanish to go into Spanish and not say it in English,” explained the film’s screenwriter, Pulitzer Prize winner Tony Kushner.

“So we thought it was out of respect that we didn’t subtitle any of the Spanish,” said Spielberg. “(We thought) that the language had to exist in equal portions alongside English.”

The producers were so determined to get this version “right” that they even hired experts on the New York Puerto Rican experience of the late 1950s.

Julio Monge, a dancer, actor and director who worked with the original choreographer, Jerome Robbins, consulted on the script.

Monge reflected on the challenges of past productions. “The reality of the time when 'West Side Story' first appeared was (that) there weren’t that many Puerto Ricans (on the mainland) trained as dancers, singers and actors. Even when I got to New York in the eighties, the demographic was still imbalanced,” Monge said.  “It’s amazing now to see this new production of ‘West Side Story,’ and to have so many Puerto Rican performers in it.”

Rita Moreno is often referred to as the only Latino actor associated with earlier film and stage adaptations. The reality is that both the 1957 play and 1961 movie featured other Latino performers. Chita Rivera was the original Anita on Broadway and Jaime Sánchez played Chino on stage. María Jímenez Henley, and the late actors Rudy del Campo and Yvonne Othon Wilder were among the Latinos who appeared in the 1961 film. 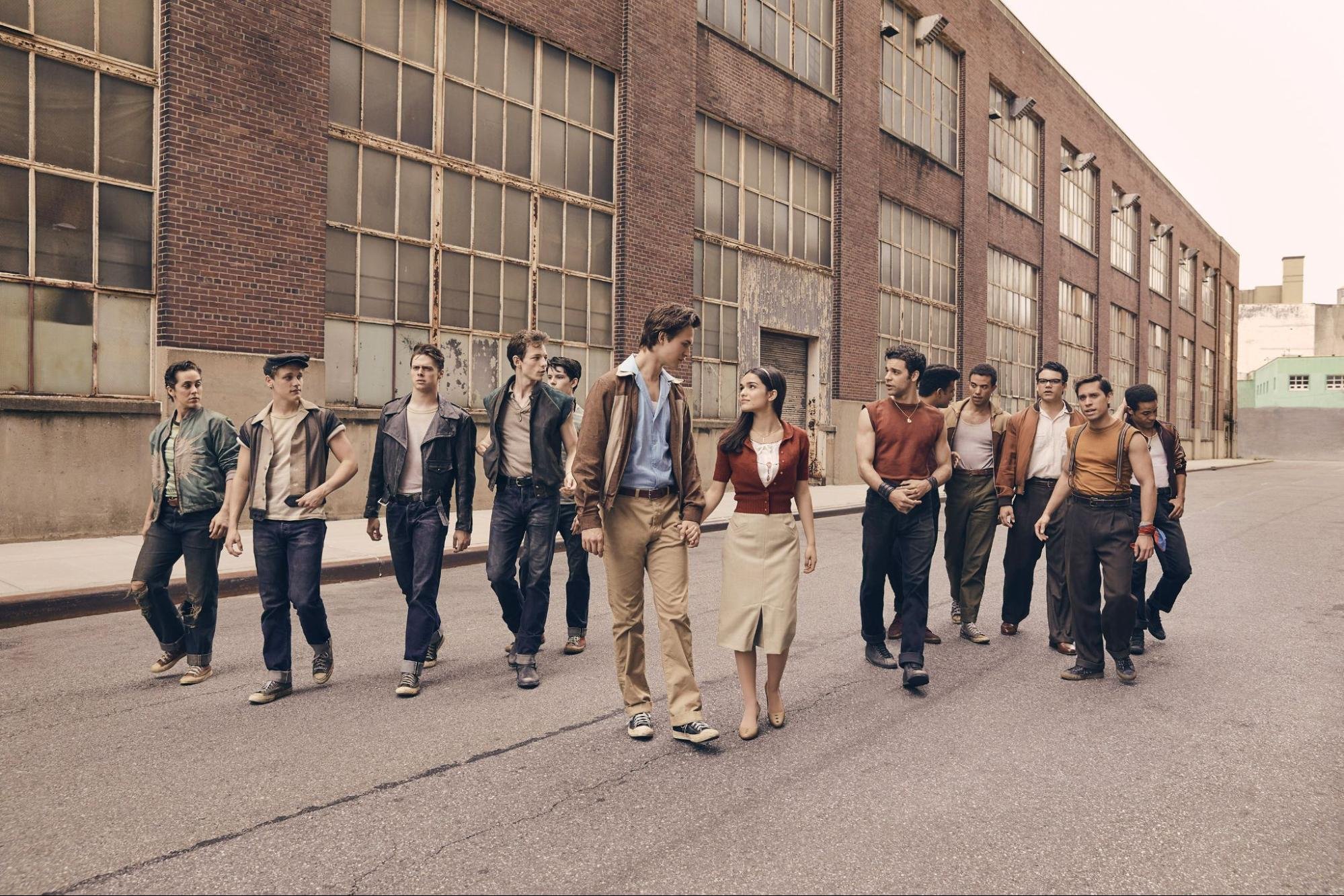 Tony (Ansel Elgort) and Maria (Rachel Zegler) with the Sharks and the Jets on Manhattan’s Upper West Side. Photo courtesy of The Walt Disney Company

Nevertheless, U.S. society held fewer opportunities for Latinos in the 1950s. So to deepen the understanding of the political and societal landscape of that era, the producers invited Brooklyn College historian and Professor Emerita Virginia Sánchez Korrol to talk to the cast and crew about the issues facing Puerto Ricans who had left the island after World War II.

“There simply weren’t enough jobs there because industrialization required skills they didn’t have,” Sánchez Korrol said. “People began to leave–to go to New York to earn a living and enough money to send back home.”

“West Side Story” centers on the conflict between two gangs: the Sharks, who are new arrivals from Puerto Rico, and the Jets, whose members are descendants of European immigrants. Despite the cultural differences, Maria and Tony fall in love while their gritty, aging neighborhood on Manhattan’s far West Side begins to crumble.

This is fiction, of course, but the setting was very real. For many West Side residents, the late 1950s was a troubling, uncertain time as their world was being turned upside down, not only by the neighborhood’s rapidly changing ethnic mix, but also by the massive postwar urbanization project that would include Lincoln Center for the Performing Arts and other high rise structures.

“This entire swath of land from 60th to 72nd Street, from Broadway to the river was just blasted away by Robert Moses and the (Mayor’s) Committee on Slum Clearance,” Kushner explained. “These people were being thrown out of their homes and no attempt was really made to help them relocate.”

“West Side Story” is generally recognized as having considerable historical significance and depicts the complexities of mid-century U.S. society. The storyline seems to have been taken straight from the headlines of the day: gang violence and ethnic conflict were very real problems in the New York City of the 1950s. And, while the movie’s mambo dance scene and unforgettable music continue to entertain, “West Side Story” also illustrates the social problems of 1950s New York: poverty, broken homes and drug addiction are among the themes explored.

“There was a level of urban poverty in the ‘50s that continues to this day, disgracefully. It was very much on the West Side at that point,” Kushner said. 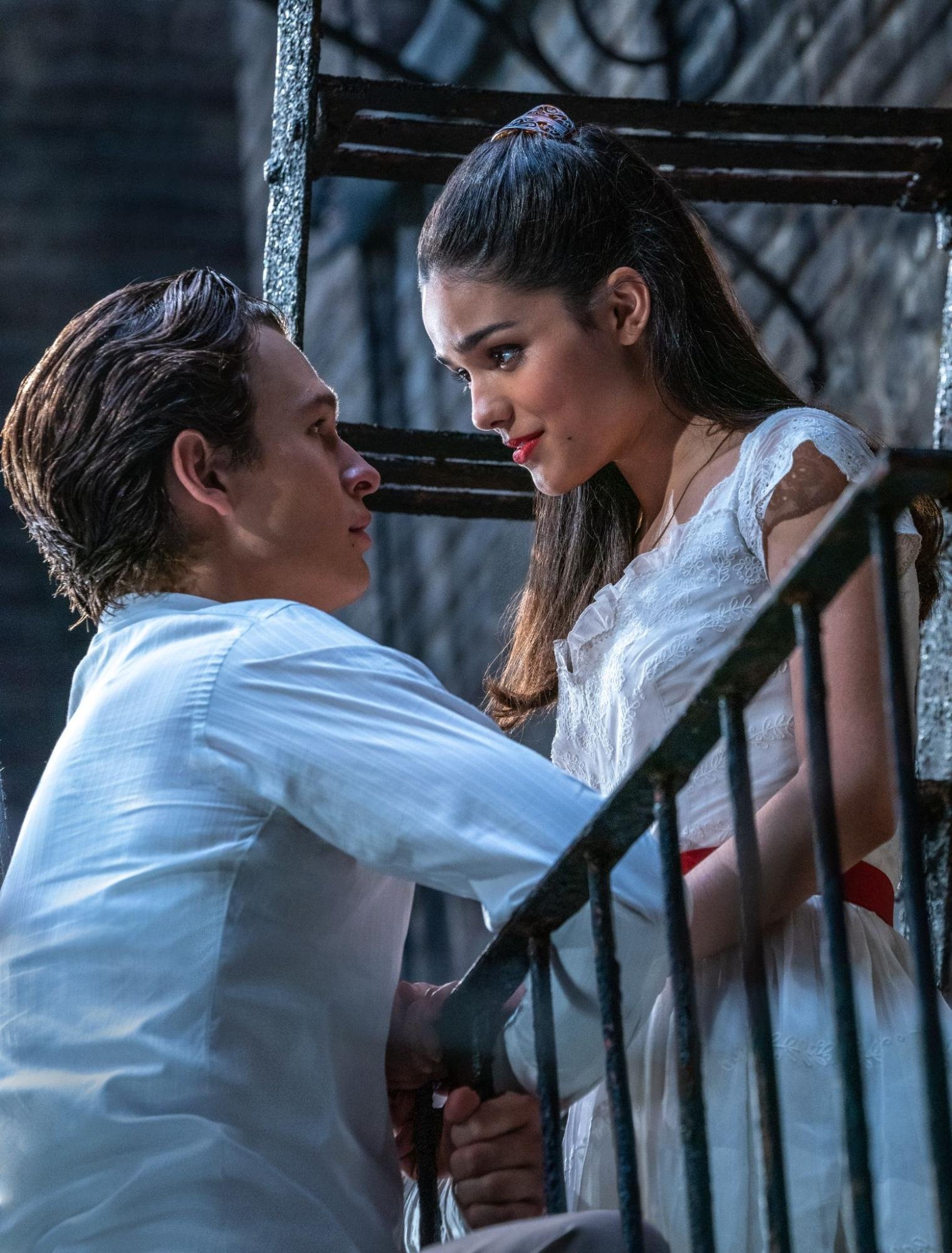 In the early 60s, “West Side Story,” hit theaters as the nation’s civil rights movement began to capture the public’s attention. Considered ahead of its time, both the play and film helped raise awareness about the blatant discrimination faced by Latinos and other ethnic groups.

“Because it was 1957 when the musical came out, there were certain kinds of explorations that weren’t available. (But) just doing as much as it did in ’57 was an incredibly radical thing," Kushner added. “There is no way on earth anyone can convince me that seeing (Rita’s) 'Anita,' on screen didn’t make people who were willing to think about their own prejudices examine themselves. That made a difference.”

Rita Moreno likes to think that she might have made a difference. For the past 60 years she has been the best known Anita. Although she said she’s fortunate to play the new role of Valentina, Doc’s widow, in the Speilberg version, Moreno admitted that passing the torch on to the new 'Anita,' Ariana DeBose, was tough.

“It wasn’t easy,” she said. “I’m not going to say that I wasn’t envious. I wished that I could be that young again and do it again. Obviously that wasn’t going to be. (But) I love every scene that I am in (in the new movie). I love what I am doing.”

Saida Pagan is an award-winning journalist and 2021 recipient of two first-place awards from the National Association of Telecommunications Officers and Advisors. Saida was born in New York City and is of Puerto Rican descent. She has reported in cities across the United States and holds a master’s degree in strategic communication.

Through palabra., the National Association of Hispanic Journalists freelance members cover stories and communities that have been disregarded in larger news outlets based on the ideology that ‘ethnic’ news is only an issue for marginalized communities, and not a human issue.

For years, NAHJ has advocated for more Latinos in newsrooms, and palabra., is bringing this mission statement to life by creating an opportunity for freelance journalists to share their local stories, perspectives, and an accurate and honest representation of the Latino community.