Wage Inequality Continued to Increase in 2020 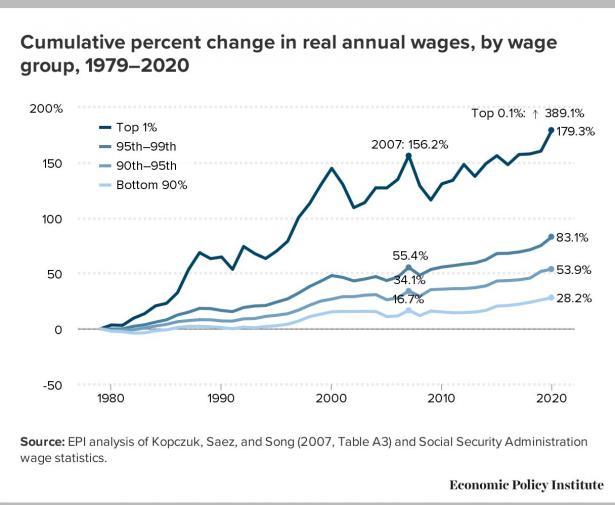 Two features of the pandemic economy distorted wage patterns in 2020 and led to faster wage growth, especially at the top. One feature was that inflation grew at a subdued 1.2% rate, boosting the average real wage (but not affecting distribution). A second feature was that, as employment fell (the number of earners fell by 1.7 million, or 1.6%) and unemployment rose (to 8.1%), the composition of the workforce changed. Specifically, job losses were heaviest for lower wage workers so the mix of jobs shifted toward higher paying ones, artificially boosting average wages (see Gould) and generating faster measured wage growth especially in the bottom half.

This continuous growth of wage inequality undercuts wage growth for the bottom 90% and reaffirms the need to place generating robust wage growth for the vast majority and rebuilding worker power at the center of economic policymaking. See Mishel and Bivens (2021) for the evidence that an erosion of worker power due to excessive unemployment, eroded collective bargaining, corporate-driven globalization, weaker labor standards, new employer-mandated agreements (such as noncompetes), and supply-chain dominance explains wage suppression and wage inequality growth.

These are the results of EPI’s updated series on wages by earning group, which is developed from published Social Security Administration (SSA) data and updates the wage series from 1947–2004 originally published by Kopczuk, Saez, and Song (2010). This data, unlike the usual source of our other wage analyses (the Current Population Survey), allow us to estimate wage trends for the top 1.0% and top 0.1% of earners, as well as those for the bottom 90% and other categories among the top 10% of earners. This wage data is not top-coded, meaning the underlying earnings reported are actual earnings and not “capped” or “top-coded” for confidentiality. These SSA wage data are W-2 earnings which include realized stock options and vested stock awards.

One constant wage dynamic in every period since 1979 has been that the wages for the bottom 90% are continuously redistributed upwards.

Lawrence Mishel is a distinguished fellow at EPI after serving as president from 2002–2017. Mishel first joined EPI in 1987 as research director. In the more than three decades he has been with EPI, Mishel has helped build it into the nation’s premier research organization focused on U.S. living standards and labor markets.

Mishel’s primary research interests include labor markets and education. He has written extensively on wage and job quality trends in the United States. He co-edited a research volume on emerging labor market institutions for the National Bureau of Economic Research. His 1988 research on manufacturing data led the U.S. Commerce Department to revise the way it measures U.S. manufacturing output. This new measure helped accurately document the long decline in U.S. manufacturing, a trend that is now widely understood.

Mishel has testified before Congress on the importance of promoting policies that reduce inequality, generate jobs, improve the lives of American workers and their families, and strengthen the middle class. He also serves frequently as a commentator in print, broadcast, and online media.

Prior to joining EPI, Mishel held a number of research roles, including a fellowship at the U.S. Department of Labor. He also served as a faculty member at Cornell University’s School of Industrial and Labor Relations. Mishel also served as an economist for several unions, including the Auto Workers, Steelworkers, AFSCME, and the Industrial Union Department, AFL-CIO. Mishel holds a Ph.D. in economics from the University of Wisconsin at Madison. Originally from Philadelphia, he has four children and two grandsons and lives with his wife and his dog, Bella, in Washington, D.C.

Jori Kandra joined EPI in 2019 after completing her undergraduate degree at the University of Texas at Austin. As a research assistant, Kandra supports the research team through data collection, recording, and analysis, as well as proofreading, editing, and helping prepare articles and blog posts for publication.

Join EPI to build an economy that works for everyone
We need your help in order to continue our work on behalf of hard-working Americans. Our donors value our high-quality research, reputation for truth-telling, and practical policy solutions. Your tax-deductible gift to EPI makes you an important partner in providing this critical public service.

If you prefer to donate by check, please click here: epi.org/donate-by-check