Given that Starbucks would go to such lengths to stop just a handful of stores from joining a union, it’s no surprise that it took 50 years after its founding for a single café to unionize. And it’s no wonder it's seen as a groundbreaking event. 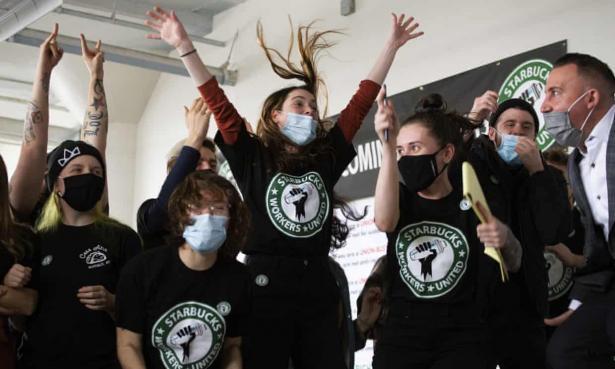 Starbucks employees and supporters react as votes are read during a viewing of their union election in Buffalo., Photograph: Joshua Bessex/AP

The iconic American coffee chain, Starbucks, employs hundreds of thousands of people in nearly 9,000 cafés nationwide. And yet, the news that a handful of Starbucks employees at one café in Buffalo, New York, recently voted to join Workers United—an affiliate of SEIU—made headlines nationally. The New York Times called it a “big symbolic win for labor,” while the Washington Post hailed it as a “watershed union vote.” Social media feeds were replete with joyous posts celebrating the vote. The café, located on Elmwood Avenue, was the only one out of three union-voting Starbucks locations in Buffalo that successfully chose to unionize.

“It is significant,” says Cedric de Leon of the Starbucks union vote. De Leon is the director of the Labor Center at the University of Massachusetts Amherst, where he is an associate professor of sociology, and he is the author of several books about labor organizing in the U.S. “The employer knows it and the workers know that establishing a beachhead in one of the largest corporations, and really an iconic brand in the U.S. hospitality market, is a major accomplishment.”

Ahead of ballots being cast, Starbucks tried to delay the vote and even stacked the Buffalo cafés with new staff to try to dilute “yes” votes. It flew in external managers to closely watch workers in what was seen as brazen intimidation. The company, which has long resisted union activity, brought its former Chief Executive Howard Schultz to Buffalo to discourage workers from unionizing, even shutting down its cafés during his Saturday visit so they could attend what was essentially a captive-audience address.

Given that Starbucks would go to such lengths to stop just a handful of stores from joining a union, it’s no surprise that it took 50 years after its founding for a single café to unionize. And it’s no wonder that commentators are shocked by what is a potentially groundbreaking event.

During his address, Schultz, who remains Starbucks’ largest shareholder, reportedly spoke of the company’s health insurance benefits and tuition assistance as reasons why a union was unnecessary. Believing he knows what is best for workers, Schultz had written in his first memoir, “I was convinced that under my leadership, employees would come to realize that I would listen to their concerns. If they had faith in me and my motives, they wouldn’t need a union.”

Yet there is evidence that Starbucks workers could indeed use the collective bargaining power that a union confers. A study by Unite Here of thousands of Starbucks employees working at airport locations found a racial pay gap with Black workers earning $1.85 less per hour than their white counterparts. Nearly one in five of those workers reported not having enough money to purchase food.

And in 2020, in the midst of the national uprisings for racial justice, Starbucks issued a policy prohibiting workers from wearing pins or clothing in support of Black Lives Matter. The company backpedaled after a public uproar.

Like Amazon and Walmart, Starbucks has often retaliated against those workers seeking to organize a union. Starbucks barista Gabriel Ocasio Mejias in Orlando, Florida, was fired after attempting to convince his colleagues to join Unite Here.

The pandemic was particularly hard on workers as online to-go orders sharply spiked. A shift supervisor in New York who wished to remain anonymous told the Guardian, “They want us to just be these robots that move fast, we’re just little drones to them that just need to pump out as many lattes as we can in a half-hour.”

When asked to respond to the shift supervisor’s complaint, a Starbucks spokesperson responded with a statement that could only have been written by a public relations expert. “Our 200,000 partners across the US are the best people in the business, and their experiences are key to helping us make Starbucks a meaningful and inspiring place to work,” said the spokesperson. “We offer a world-class benefits program for all part- and full-time partners and continued support for partners during Covid-19 to care for themselves and their families, and we continue to have an industry-leading retention rate.”

It’s true that the company refers to its employees as “partners,” as if using a term that sounds powerful is enough to eclipse the lack of worker power. But the use of the term has a downside as workers are challenging Starbucks to live up to what “partner” implies.

One of the Buffalo Starbucks workers who voted to unionize, Michelle Eisen, said in a statement, “This win is the first step in changing what it means to be a partner at Starbucks, and what it means to work in the service industry more broadly.” She added, “With a union, we now have the ability to negotiate a contract that holds Starbucks accountable to be the company we know it can be, and gives us a real voice in our workplace.” And it’s precisely that ability that Starbucks and Schultz are terrified of.

“When workers get the notion that this giant boss who seemed like a colossus a year ago can be beaten, when they see that, then they begin to organize,” says De Leon. Already two Starbucks stores in Boston, upon seeing the success of the Buffalo café, signed up for union elections. Those workers, once more challenging Starbucks to live up to the term “partners,” issued a statement saying, “We believe that there can be no true partnership without power-sharing and accountability.”

Workers at a store in Mesa, Arizona, are similarly inspired by the victory in Buffalo and filed a petition for a union election. One worker told the Arizona Republic, “Our eyes were on Buffalo.”

Increasingly, workers appear to be seeing through the anti-union propaganda of their corporate employers. Starbucks spokesperson Reggie Borges said of the pro-union activity in Mesa, “We shouldn’t have a third party in between us when it comes to working together to develop the best experience that our partners can have.” But a Buffalo Starbucks worker serving as a union liaison for Mesa workers countered, “our union is going to be made up of baristas and shift supervisors who make up Starbucks. That’s not a third party.”

The general public also seems to be growing more supportive of union efforts, as a worker at the Buffalo store reported that more people were coming to the café, excited by the news of the union vote, and tipping more generously than usual. A Gallup poll in September found the highest public support for unions since 1965, with a whopping 68 percent of respondents supporting the right to collective bargaining. De Leon says, “So many successful organizing campaigns are buttressed by community support.”

The eyes of those union supporters among us now ought to be on Starbucks management as the question remains whether or not the company will negotiate a contract in good faith. Terri Gerstein writing in the American Prospect warned that “even in Buffalo, the battle is far from over,” and that “there are too many ways employers can try to destroy a union even after an election.” Vermont Senator Bernie Sanders, who had declared his solidarity with the Buffalo workers, demanded after news emerged of the vote that “The company should stop pouring money into the fight against the union and negotiate a fair contract now.”

Sonali Kolhatkar is the founder, host and executive producer of “Rising Up With Sonali,” a television and radio show that airs on Free Speech TV (Dish Network, DirecTV, Roku) and Pacifica stations KPFK, KPFA, and affiliates.