Democrats must adopt "a whole-of-government approach" if they are to fulfill their promises to act on the climate crisis, sky-high prescription drug prices, immigration reform, student debt, and other key policy priorities.

The Congressional Progressive Caucus on Wednesday announced plans to unveil a slate of executive actions it hopes President Joe Biden will pursue as Democratic lawmakers attempt to chart a path forward for the party's agenda, which has been derailed by right-wing Sen. Joe Manchin.

"We should not wait for that legislative path for the president to take action."

Rep. Pramila Jayapal (D-Wash.), chair of the Congressional Progressive Caucus, said in a statement that Democrats must adopt "a whole-of-government approach" if they are to fulfill their promises to act on the climate crisis, sky-high prescription drug prices, immigration reform, student debt, and other key policy priorities.

"In Congress, we will continue to prioritize a legislative path for Build Back Better, focused on taking the current text of the legislation passed by the House, keeping as much of it as possible—but no less than the elements contained in the framework negotiated by the president and committed to by Senators Manchin and [Kyrsten] Sinema some months ago," Jayapal said. "We have worked too long and too hard to give up now, and we have no intention of doing so."

"In the meantime, the White House must continue to act on a parallel track by using the president's incredibly powerful tool of executive action," the Washington Democrat added. "The legislative approach, while essential, has no certainty of timing or results—and we simply cannot wait to deliver tangible relief to people that they can feel and will make a difference in their lives and livelihoods."

Jayapal signaled during a press call earlier this week that the nearly 100-member CPC would emphasize Biden's executive authority in the coming days after Manchin—a coal profiteer backed by torrents of corporate cash—said he would oppose the current version of the Build Back Better Act, a centerpiece of the president's agenda.

"I think, at this point, we should not wait for that legislative path for the president to take action," Jayapal said on the call with reporters, during which she defended her caucus' near-unanimous decision to vote for the bipartisan infrastructure bill before the Build Back Better Act had passed both chambers of Congress. 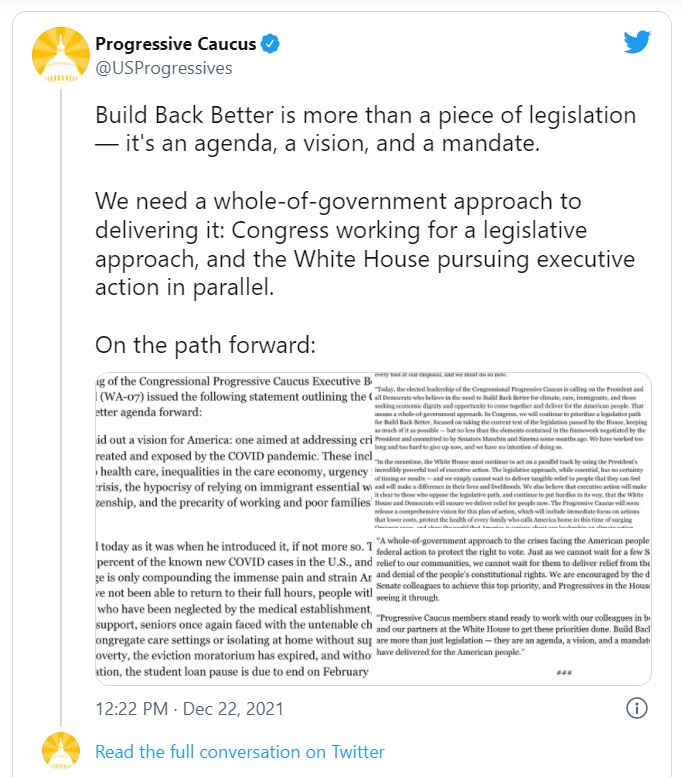 While Jayapal's statement Wednesday was light on precise details, the CPC is likely to pressure Biden to use his executive powers to cancel at least some federal student loan debt and potentially advance other Democratic goals, such as lowering medicine costs.

Jayapal does specifically mention "federal action to protect the right to vote" as the GOP assault on the franchise intensifies at the state level nationwide. Senate Republicans have repeatedly filibustered Democratic voting rights bills, including a compromise measure backed by Manchin—an ardent defender of the filibuster rule.

"Just as we cannot wait for a few senators to deliver economic relief to our communities, we cannot wait for them to deliver relief from the rampant voter suppression and denial of the people's constitutional rights," Jayapal said Wednesday. "We are encouraged by the dogged determination of our Senate colleagues to achieve this top priority, and progressives in the House remain committed to seeing it through."

The American Prospect's David Dayen argued Tuesday that "if Biden wants a successful presidency, the only path forward goes through using his own prodigious authority."

"Biden could cancel student debt for 42 million borrowers," Dayen noted. "He could give millions more workers access to overtime pay. He could deschedule marijuana from the list of controlled substances, effectively legalizing a burgeoning industry. His IRS could end the carried interest loophole that makes private equity so attractive and prohibit private equity management fees, weakening this cancerous financial scheme that is destroying hundreds of businesses."

"Biden has significant command-and-control authority to meet his Paris Agreement goals, which if used aggressively could spell the end of a certain mining technique Manchin is wedded to in West Virginia," he continued. "In the absence of Build Back Better provisions lowering prescription drug costs, Biden could use federal law to seize drug patents developed with public money and assure they will be distributed affordably."