Where is the Antimatter?

Because there wasn’t an equal amount of matter and anti-matter in the early universe? That solves the problem. Case closed? Of course not. Because physicists make a living from solving problems - so they have an incentive to create problems. 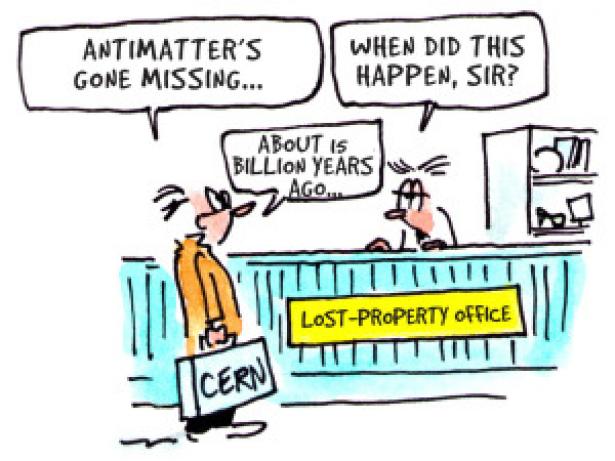 [This is a transcript of the video embedded below. Some of the explanations may not make sense without the animations in the video.]

Is it ant-ee-matter or ant-ai-matter? What do ants think about it and why isn’t aunt pronounced aunt. These are all good questions that we’ll not talk about today. Instead I want to talk about why the universe contains so little antimatter, why that’s not a good question, and if there might be stars made antimatter in our galaxy. Welcome to another episode of science without the gobbledygook.

Last year, I took part in a panel debate on the question why there’s so little anti-matter in the universe. It was organized by the Institute of Art and Ideas in the UK and I was on the panel together with Lee Smolin from Perimeter Institute and Tara Shears who’s a professor for particle physics in Liverpool. This debate was introduced with the following description:

“Antimatter has fascinated since it was proposed by Dirac in the 1920s and confirmed with the discovery of the positron a few years later. Heisenberg - the father of modern physics - referred to its discovery as “the biggest jumps of all the big jumps in physics”. But there’s a fundamental problem. The theory predicts the disappearance of the universe within moments of its inception as matter and antimatter destroy each other in a huge cataclysm.”

Unfortunately, that’s wrong, and I don’t just mean that Heisenberg wasn’t the father of modern physics, I mean it’s wrong that Dirac’s theory predicts the universe shouldn’t exist. I mean, if it did, it would have been falsified.

When I did the debate I found this misunderstanding a little odd… but I have since noticed that it’s far more common than I realized. And it’s yet another one of those convenient misunderstandings that physicists don’t make a lot of effort clearing up. In this case it’s convenient because they want you to believe that there is this big mystery and to solve it, we need some expensive experiments.

So let’s have a look at what Dirac actually discovered. Dirac was bothered by the early versions of quantum mechanics because they were incompatible with Einstein’s theory of special relativity. In a nutshell this is because, if you just quickly look at the equation which they used at the time, you have one time derivative but two space derivatives. So space and time are not treated the same way which, according to Einstein, they should be.

Dirac found a way to remedy this problem, and his remedy is what’s now called the Dirac equation. You can see right away that it treats space and time derivatives the same way. And so it’s neatly compatible with Einstein’s Special Relativity.

But. Here’s the thing. He also found that the solutions to this equation always come in pairs. And, after some back and forth, it turned out that those pairs are particles of the same mass but of opposite electric charge. So, every particle has partner particle with opposite charge, which is called it’s “anti-particle”. Though in some cases the particle and anti-particle are identical. That’s the case for example for the photon, which has no electric charge.

The first anti-particle was detected only a few years after Dirac’s derivation. In my mind this is one of the most impressive predictions in the history of science. Dirac solved a mathematical problem and from that he correctly predicted a new type of particle. But what Dirac’s equation tells you is really just that those particles exist. It tells you nothing about how many of them are around in the universe. Dirac’s equation doesn’t say any more about the amount of anti-matter in the universe than Newton’s law of gravity tells you about the number of apples on earth.

The number of particles of any kind in the universe is an initial condition, which means you have to specify this number at some moment in time, usually early in the universe, and then you can use Dirac’s and other equations to calculate what happens later. This means that the amount of particles is just a number that you must enter into the model for the universe. This number can’t be calculated, so one just extracts it from observations. It can’t be calculated because all our current theories work with differential equations. And those equations need the initial conditions to work. The only way you can explain an initial condition is with an even earlier initial condition. You’ll never get rid of it. I talked more about differential equations in an earlier video, so check this out for more.

The supposed problem with the amount of antimatter is often called the matter anti-matter asymmetry or the baryon asymmetry problem. Those terms refer to the same issue. The argument is that if matter and anti-matter had been present in the early universe in exactly the same amounts, then they’d have annihilated and just left behind a lot of radiation. So how come we have all this stuff around?

Well, was it maybe because there wasn’t an equal amount of matter and anti-matter in the early universe? Indeed, that solves the problem.

Case closed? Of course not. Because physicists make a living from solving problems, so they have an incentive to create problems where there aren’t any. For anti-matter this works as follows. You can calculate that to correctly obtain the amount of radiation and matter we see today, the early universe must have contained just a tiny little bit more matter than anti-matter. A tiny little bit means a ratio of about 1.0000000001.

Particle physicists now claim that the ratio should have been 1 exactly. That’s because for some reason they believe that this number is somehow better than the number which actually describes our observations. Why? I don’t know. Remember that none of our theories can actually predict this number one way or another. But once you insist that the ratio was actually one, you have to come up with a mechanism for how it ended up not being one. And then you can publish papers with all kinds of complicated solutions to the problem which you just created.

To see why I say this is a fabricated problem, let us imagine for a moment that if the matter anti-matter ratio was 1 exactly that would actually describe our universe. It doesn’t, of course, but just for the sake of the argument imagine the theory was so that 1 was indeed compatible with observer. Remember that this is the value that physicists argue the number should have. What would they say if it was actually correct? They would probably remember that Dirac’s theory actually did not predict that this number must have been exactly. So then they’d ask why it is equal to one, just like they do now ask why its 1.0000000001. As I said, it doesn’t matter what the number is, we can’t explain it one way or another.

You sometimes hear particle physicists claim that you can shed light on this alleged problem with particle colliders. They say this because you can use particle colliders to test for certain interactions that would shift the matter anti-matter ratio. However, these shifts are too small to bring us from 1 exactly to the observed ratio. This means not only is there no problem to begin with, even if you think there is a problem, particle colliders won’t solve it.

The brief summary is that the matter antimatter asymmetry is a pseudo-problem. It can be solved by using an initial value that agrees with observations, and that’s that. Of course it would be nice to have a deeper explanation for that initial value. But within the framework of the theories that we currently have, such an explanation is not possible. You always have to choose an initial state, and you do that just because it explains what we observe. If a physicist tries to tell you otherwise, ask them where they get their initial state from.

You may now wonder though how well we actually know how much anti-matter there is in the universe. If Dirac’s theory doesn’t predict how much it is, maybe we’re underestimating how much there is? Indeed, it isn’t entirely impossible that big chunks of antimatter float around somewhere in the universe. Weirder still, if you remember, anti-matter is identical to normal matter except for its electric charge.

So for all we know you can make stars and planets out of anti-matter, and they would work exactly like ours. Such “anti-stars” could survive in the present universe for quite a long time because there is very little matter in outer space, so they would annihilate only very slowly. But when the particles floating around in outer space come in contact with such an anti-star that would create an unusual glow.

Astrophysicists can and have looked for such a glow around stars that might indicate the stars made of antimatter. Earlier this year, a group of researchers from Toulouse in France analyzed data from the Fermi telescope. They identified fourteen candidates for anti-stars in our galactic neighborhood which they now investigate closer. They also use this to put a bound on the overall fraction of anti-stars which is about 2 per million, in galactic environments similar as ours.

While such anti-stars could in principle exist, it’s very difficult to understand how they would have escaped annihilation during the formation of our galaxy. So it is a very speculative idea which is a polite way of saying I think it’s nonsense. But, well, when Dirac predicted anti-matter his colleagues also thought that was nonsense, so let’s wait and see what further observations show.

Sabine Hossenfelder is a German theoretical physicist, author, and musician who researches quantum gravity. She is a Research Fellow at the Frankfurt Institute for Advanced Studies where she leads the Superfluid Dark Matter group. She is the author of Lost in Math: How Beauty Leads Physics Astray, which explores the concept of elegance in fundamental physics and cosmology.