800+ Faith Leaders Tell Biden, Dems Voting Rights Must Be 'Number One Priority' in 2022

"We cannot be clearer: You must act now to protect every American's freedom to vote without interference and with confidence that their ballot will be counted and honored."

Prominent African-American faith leaders — including some of the over 800 signatories to a letter urging President Joe Biden and Congress to pass voting rights legislation — pray with members of the Texas Legislative Black Caucus at the , Martin Luther King Jr. memorial in Washington, D.C. on August 28, 2021. (Photo: Cheriss May)

Citing "extraordinary challenges" to American democracy in 2021, over 800 faith leaders on Wednesday urged President Joe Biden and the U.S. Senate to make passage of comprehensive voting rights legislation their "number one priority" for the coming year.

"It's time to stop lamenting the state of our democracy and take action to address it."

In a letter to Biden and senators, the faith leaders said that events such as the deadly January 6 attack on the U.S. Capitol by a right-wing mob and the "over 30 anti-voting bills pushed through state legislatures" this year in a Republican bid to silence marginalized communities underscore the need for "prompt, substantive federal action."

"During the Civil Rights era, prominent leaders were driven by their faith to fight for equality," the authors wrote. "This is why we continue the push for voting rights today—our faith teaches us that each one of us deserves dignity and freedom."

"We cannot be clearer: You must act now to protect every American's freedom to vote without interference and with confidence that their ballot will be counted and honored," the clergy members implored. "Passing comprehensive voting rights legislation must be the number one priority of the administration and Congress."

"Nothing—including the filibuster—should stand in the way of passing the Freedom to Vote Act and the John Lewis Voting Rights Advancement Act, both of which have already passed the House and await Senate action and leadership," they added. 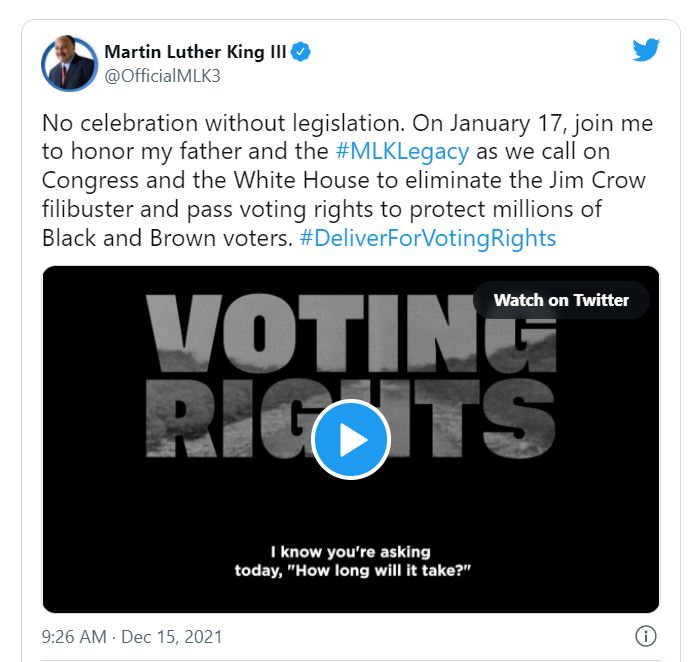 In a Wednesday interview with ABC News, Biden expressed a willingness to do  "whatever it takes" to secure passage of voting rights legislation, including modifying the filibuster—a position that has evolved from his opposition to the policy earlier this year. 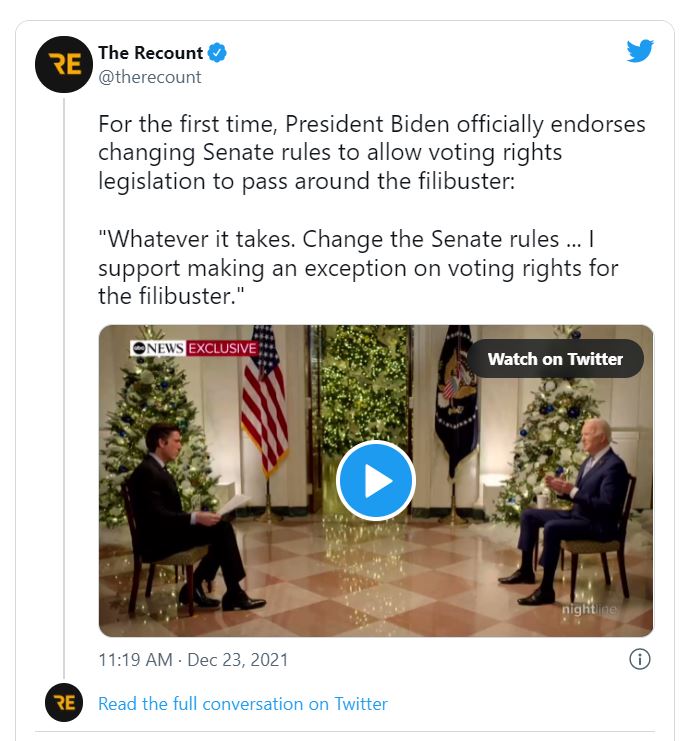 The faith leaders vowed to "continue to sound the alarm" until the two voting rights bills are passed.

"On Martin Luther King Jr. Day in January, we will accompany Martin Luther King III, Andrea King, Yolanda Renee King, and voting rights advocates across the country to honor Dr. King's legacy by calling for Congress and the president to restore and expand access to the ballot for all voters," they wrote in the letter. "It's time to stop lamenting the state of our democracy and take action to address it."

"As Dr. Martin Luther King Jr. so valiantly said in his Give Us The Ballot address, 'the denial of this sacred right is a tragic betrayal of the highest mandates of our democratic tradition.'"

"As Dr. Martin Luther King Jr. so valiantly said in his Give Us the Ballot address, 'The denial of this sacred right is a tragic betrayal of the highest mandates of our democratic tradition,'" the faith leaders said. "That is why this Martin Luther King Day, we will not accept empty promises. Congress must serve the nation and future generations by immediately passing voting rights legislation."

"Leaders from all faiths, including Rabbi Abraham Joshua Heschel, joined my father on the Selma to Montgomery march to call for voting rights because they understood that this cause is transcendent, regardless of denomination," Martin Luther King III, chairman of the Drum Major Institute, said in a statement.

"The faith community is coming together again on MLK Day in 2022 to call on Congress and the president to ensure they protect our right to vote," he added. "There is no time to waste."

Rabbi Danya Ruttenberg, scholar in residence at the National Council of Jewish Women, noted that "Rev. Dr. Martin Luther King said that we are all caught in an 'inescapable network of mutuality, tied in a single garment of destiny. Whatever affects one directly, affects all indirectly. I can never be what I ought to be until you are what you ought to be.'"

"In our democracy, the right to determine and shape our own futures is tied up in our right to cast a vote and have that vote counted," she added. "It's why the work to protect our freedom to vote is sacred and—in the face of tyranny and racism and fear—must be redoubled."