At Least 13 Republicans Who Participated in Jan. 6 Attack Are Running for Office

If elected, these candidates would join at least 10 other Republican participants in the attack who have been elected to state and local offices. Many of them enjoy support of fellow party leaders — a sign of the right’s ongoing radicalization. 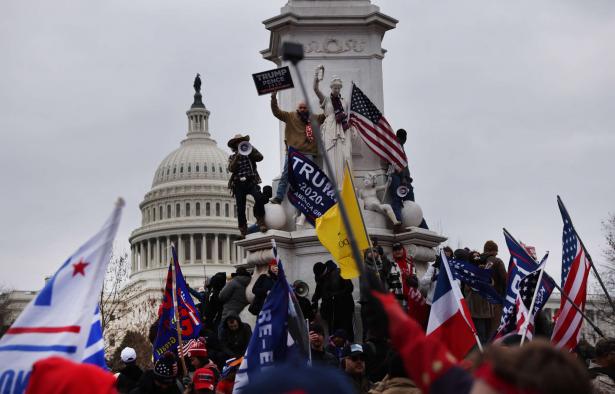 At least 13 Republicans who are running for public offices have been identified as participants in the January 6 attack on the Capitol.

Newsweek has compiled a list of GOP candidates who disclosed their participation in the day’s events through social media posts or comments to news outlets. Two of the candidates face legal charges in relation to the event.

Mark Middleton, a candidate for the Texas House, is facing multiple federal charges in relation to the attack, after posting videos online about being among the first to breach the Capitol. Middleton is charged with counts of assaulting a police officer, disorderly conduct, and more. His campaign website suggests that the far right candidate is running on a platform of secession for the state.

In New Hampshire, Jason Riddle is running to unseat Rep. Annie Kuster, a Democrat in the House of Representatives. Riddle has pleaded guilty to theft of government property and parading, demonstrating or picketing in relation to the attack. He had allegedly stolen trinkets from the Senate parliamentarian’s office and drank from a bottle of wine there, according to a criminal complaint.

Four other candidates are running for a seat in the House of Representatives. Teddy Daniels, who posted a video from the Capitol on January 6, is challenging Rep. Matt Cartwright, a Democrat from Pennsylvania. Derrick Van Orden, who has told reporters that he was at the attack, is also running to unseat a Democrat, in Wisconsin.

One candidate, Audra Johnson, is running to unseat Rep. Peter Meijer of Michigan, a fellow Republican. Meijer did not vote to overturn election results in November 2020 and was one of the 10 Republicans in the House who defied the rest of their party in voting to impeach Donald Trump.

Johnson’s challenge to Meijer reflects the Republican Party’s increasing hostility toward members who refuse to bow to Trump and the authoritarian brand of politics that he has helped make mainstream in the GOP. Earlier this year, GOP members had voted to remove Rep. Liz Cheney (R-Wyoming) from her leadership position within the party for refusing to peddle Trump’s election lies, despite the fact that she has often promoted other vile policies by Republicans.

More recently, Republican officials have been provoking their followers to attack fellow Republicans who break from the party line. In November, Rep. Fred Upton (R-Michigan) shared a recording of a death threat he received over his “yes” vote on the bipartisan infrastructure bill, with a caller hurling profanities and labelling Upton as a “traitor” – the same insult that Rep. Marjorie Taylor Greene (R-Georgia) had used to label GOP members who voted the same way on Twitter.

Several of the Capitol attackers are running for governor in several states, including Nevada, Nebraska and Michigan – the latter of which will challenge Gov. Gretchen Whitmer, a Democrat who faced a kidnapping plot last year by far right extremists over her pandemic-related regulations.

If elected, these candidates would join at least 10 other Republican participants in the attack who have been elected to state and local offices. Many of these officials enjoy support of fellow party leaders, according to HuffPost — a sign of the right’s ongoing radicalization.