Sidney Poitier broke the mold of what a Black actor could be in Hollywood. The most fascinating aspect of Poitier’s career was his political and racial symbolism, intertwined with the civil rights movement. 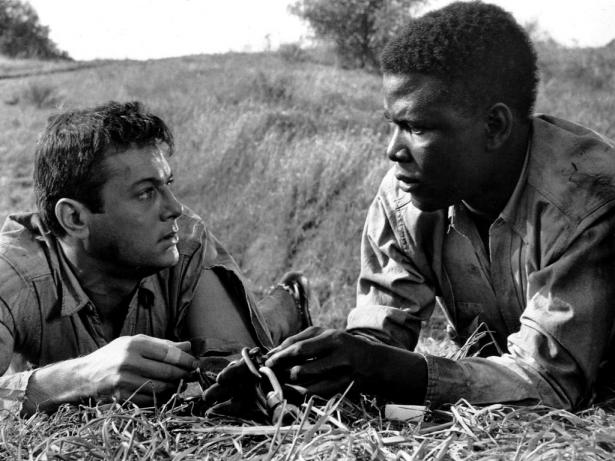 In the summer of 1967, Martin Luther King Jr. introduced the keynote speaker for the 10th-anniversary convention banquet of the Southern Christian Leadership Conference. Their guest, he said, was his “soul brother.”

“He has carved for himself an imperishable niche in the annals of our nation’s history,” King told the audience of 2,000 delegates. “I consider him a friend. I consider him a great friend of humanity.”

That man was Sidney Poitier.

Poitier, who died at 94 on Jan. 7, 2022, broke the mold of what a Black actor could be in Hollywood. Before the 1950s, Black movie characters generally reflected racist stereotypes such as lazy servants and beefy mammies. Then came Poitier, the only Black man to consistently win leading roles in major films from the late 1950s through the late 1960s. Like King, Poitier projected ideals of respectability and integrity. He attracted not only the loyalty of African Americans, but also the goodwill of white liberals.

In my biography of him, titled “Sidney Poitier: Man, Actor, Icon,” I sought to capture his whole life, including his incredible rags-to-riches arc, his sizzling vitality on screen, his personal triumphs and foibles and his quest to live up to the values set forth by his Bahamian parents. But the most fascinating aspect of Poitier’s career, to me, was his political and racial symbolism. In many ways, his screen life intertwined with that of the civil rights movement – and King himself. 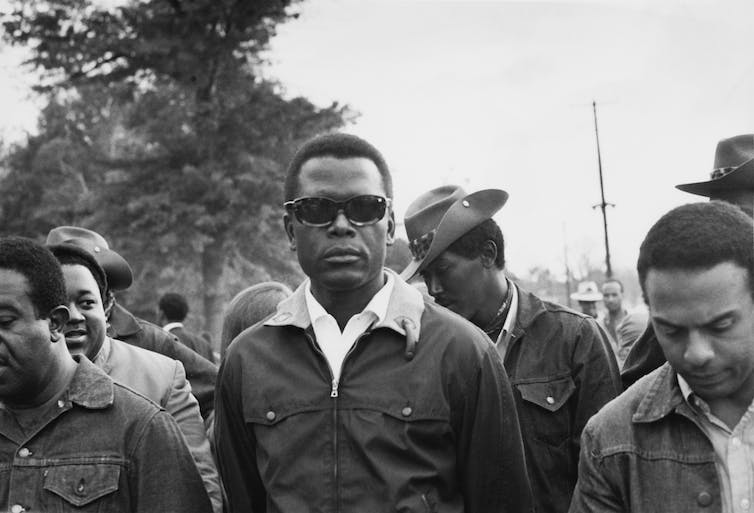 Sidney Poitier, center, marches during the Poor People’s Campaign in Washington, D.C., in May 1968. Photo by Chester Sheard/Keystone/Hulton Archive/Getty Images

An age of protests

In three separate columns in 1957, 1961 and 1962, a New York Daily News columnist named Dorothy Masters marveled that Poitier had the warmth and charisma of a minister. Poitier lent his name and resources to King’s causes, and he participated in demonstrations such as the 1957 Prayer Pilgrimage and the 1963 March on Washington. In this era of sit-ins, Freedom Rides and mass marches, activists engaged in nonviolent sacrifice not only to highlight racist oppression, but also to win broader sympathy for the cause of civil rights.

In that same vein, Poitier deliberately chose to portray characters who radiated goodness. They had decent values and helped white characters, and they often sacrificed themselves. He earned his first star billing in 1958, in “The Defiant Ones,” in which he played an escaped prisoner handcuffed to a racist played by Tony Curtis. At the end, with the chain unbound, Poitier jumps off a train to stick with his new white friend. Writer James Baldwin reported seeing the film on Broadway, where white audiences clapped with reassurance, their racial guilt alleviated. When he saw it again in Harlem, members of the predominantly Black audience yelled “Get back on the train, you fool!”

King won the Nobel Peace Prize in 1964. In that same year, Poitier won the Oscar for Best Actor for “Lilies of the Field,” in which he played Homer Smith, a traveling handyman who builds a chapel for German nuns out of the goodness of his heart. The sweet, low-budget movie was a surprise hit. In its own way, like the horrifying footage of water hoses and police dogs attacking civil rights activists, it fostered swelling support for racial integration. 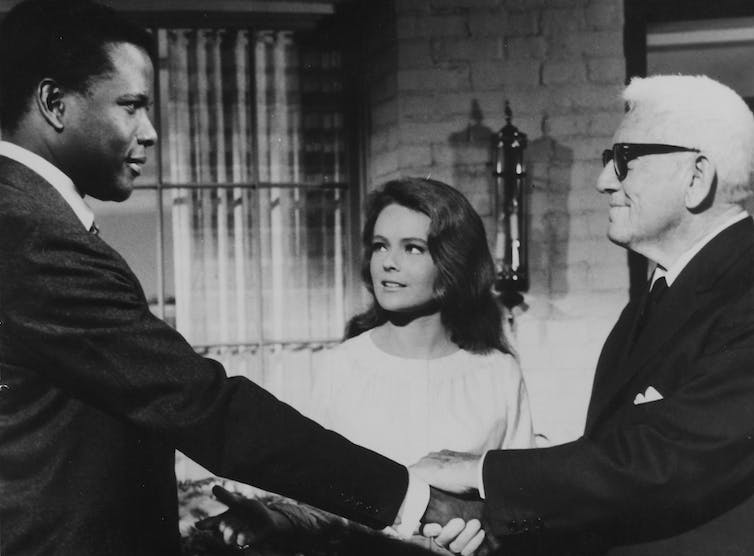 By the time of the actor’s Southern Christian Leadership Conference speech, both King and Poitier seemed to have a slipping grip on the American public. Bloody and destructive riots plagued the nation’s cities, reflecting the enduring discontent of many poor African Americans. The swelling calls for “Black Power” challenged the ideals of nonviolence and racial brotherhood – ideals associated with both King and Poitier.

When Poitier stepped to the lectern that evening, he lamented the “greed, selfishness, indifference to the suffering of others, corruption of our value system, and a moral deterioration that has already scarred our souls irrevocably.” “On my bad days,” he said, “I am guilty of suspecting that there is a national death wish.”

By the late 1960s, both King and Poitier had reached a crossroads. Federal legislation was dismantling Jim Crow in the South, but African Americans still suffered from limited opportunity. King prescribed a “revolution of values,” denounced the Vietnam War, and launched a Poor People’s Campaign. Poitier, in his 1967 speech for the SCLC, said that King, by adhering to his convictions for social justice and human dignity, “has made a better man of me.”

Poitier tried to adhere to his own convictions. As long as he was the only Black leading man, he insisted on playing the same kind of hero. But in the era of Black Power, had Poitier’s saintly hero become another stereotype? His rage was repressed, his sexuality stifled. A Black critic, writing in The New York Times, asked “Why Does White America Love Sidney Poitier So?” 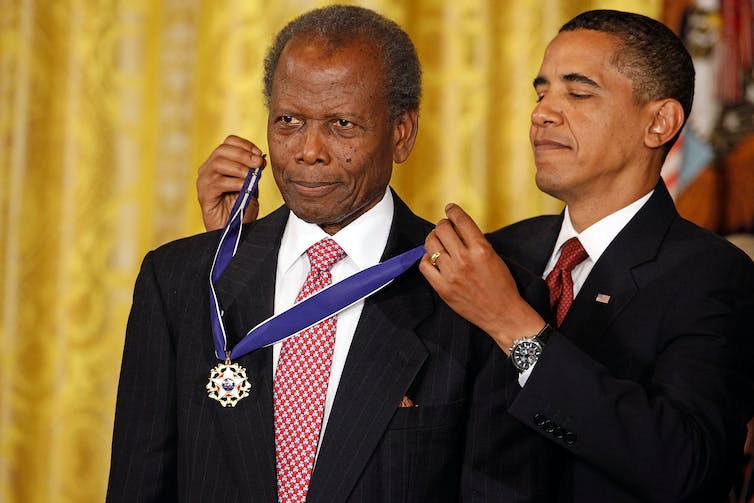 That critic had a point: As Poitier himself knew, his films created too-perfect characters. Although the films allowed white audiences to appreciate a Black man, they also implied that racial equality depends on such exceptional characters, stripped of any racial baggage. From late 1967 into early 1968, three of Poitier’s movies owned the top spot at the box office, and a poll ranked him the most bankable star in Hollywood.

Each film provided a hero who soothed the liberal center. His mannered schoolteacher in “To Sir, With Love” tames a class of teenage ruffians in London’s East End. His razor-sharp detective in “In the Heat of the Night” helps a crotchety white Southern sheriff solve a murder. His world-renowned doctor in “Guess Who’s Coming to Dinner” marries a white woman, but only after winning the blessing of her parents.

“I try to make movies about the dignity, nobility, the magnificence of human life,” he insisted. Audiences flocked to his films, in part, because he transcended racial division and social despair – even as more African Americans, baby boomers and film critics tired of the old-fashioned do-gooder spirit of these movies.

And then, the lives of Martin Luther King Jr. and Sidney Poitier intersected one final time. After King’s assassination on April 4, 1968, Poitier was a stand-in for the ideal that King embodied. When he presented at the Academy Awards, Poitier won a massive ovation. “In the Heat of the Night” and “Guess Who’s Coming to Dinner” captured most of the major awards. Hollywood again dealt with the nation’s racial upheaval through Poitier movies.

But after King’s violent murder, the Poitier icon no longer captured the national mood. In the 1970s, a generation of “Blaxploitation” films featured violent, sexually charged heroes. They were a reaction against the image of a Black leading man associated with Poitier. Although his career evolved, Poitier was no longer a superstar, and he no longer bore the burden of representing the Black freedom movement. Yet for a generation, he had served as popular culture’s preeminent expression of the ideals of Martin Luther King.