Radical historian Julius S. Scott, who passed away this month, transformed our understanding of the Haitian Revolution and its emancipatory impact on freedom struggles throughout the Americas. 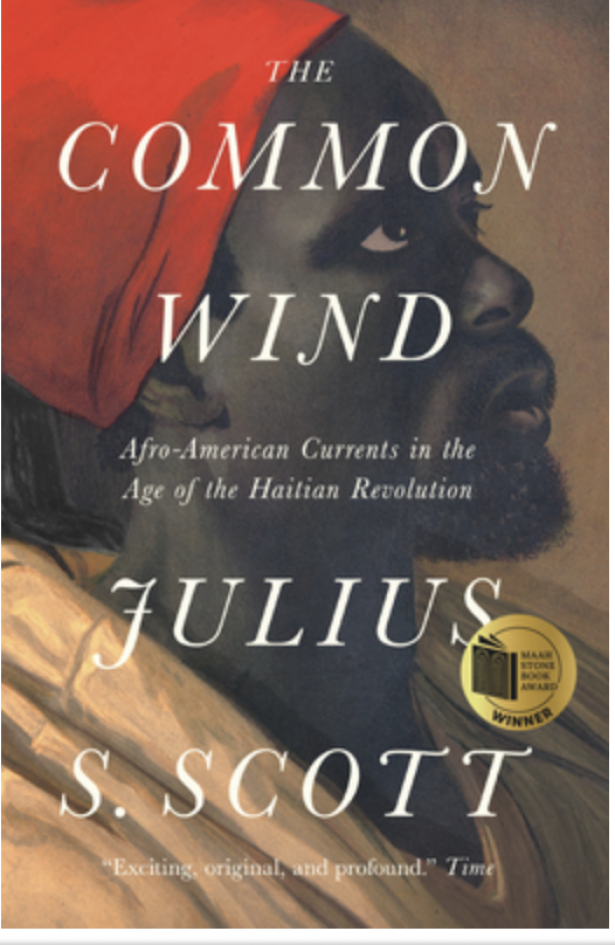 In a year filled with too many losses, the passing of radical historian Julius S. Scott this past December 6 cut especially deep. Only sixty-six years of age, Scott was mourned by scholars, students, and activists who champion his classic The Common Wind: Afro-American Currents in the Age of the Haitian Revolution as one of the great pieces of historical scholarship of the last thirty years.

Telling the story of how the Haitian Revolution reverberated throughout the Americas and helped shape the period Eric Hobsbawm referred to as the “age of revolutions,” Scott’s The Common Wind blazed a path where future researchers could appreciate the global impact of the small island’s struggle for emancipation.

Scott’s greatest achievement was perhaps to reveal the full sweep of political creativity, collective intelligence, and international cooperation that lay behind eighteenth- and nineteenth-century slave revolts. In the case of Haiti, Scott convincingly showed how that project led not only to the creation of Latin America’s first independent nation-state, but inflamed countless future struggles for the abolition of slavery all across the Americas and beyond.

In honor of his memory, Jacobin reprints the words of Scott’s close friend and colleague Marcus Rediker, from his preface to the 2018 edition of The Common Wind.

TOUSSAINT, the most unhappy man of men!

Whether the whistling Rustic tend his plough

Within thy hearing, or thy head be now

O miserable Chieftain! Where and when

Wilt thou find patience? Yet die not; do thou

Wear rather in thy bonds a cheerful brow:

Live, and take comfort. Thou hast left behind

Powers that will work for thee; air, earth, and skies;

There’s not a breathing of the common wind

That will forget thee; thou hast great allies;

Thy friends are exultations, agonies,

And love, and man’s unconquerable mind.

This book takes its title from a sonnet William Wordsworth wrote in 1802: “To Toussaint L’Ouverture,” the great leader of the Haitian Revolution, who would soon die of pneumonia as a prisoner of Napoleon in Fort de Joux in eastern France.

Julius S. Scott shows us the collective human power behind Wordsworth’s words. He focuses on “the breathing of the common wind,” asking who inhaled the history of Toussaint and the revolution and who whispered it all out again as subversive stories, to circulate with velocity and force around the Atlantic. Scott gives substance to Wordsworth’s beautiful abstraction by showing “unconquerable minds” at work — a motley crew of sailors, runaway slaves, free people of color, maroons, deserted soldiers, market women, escaped convicts, and smugglers. These people, in motion, became the vectors through which news and experience circulated in, around, and through the Haitian Revolution. Scott gives us a breathtaking social and intellectual history of revolution from below.

It would not be exactly right to call The Common Wind an “underground classic.” Its status as a classic is not in doubt, but the landed metaphor would be wrong: the book is about what happened, not underground, but rather below decks, at sea, and on the docks, on ships and in canoes, and on the waterfronts of rough-and-tumble port cities in the era of the Haitian Revolution. It would, however, be right to say that the book and its reputation parallel the world of sailors and other mobile workers who are its central subject: both have had a fugitive existence — hard to find and known about largely through word-of-mouth stories. For decades historians have spoken at conferences in hushed, admiring, conspiratorial tones about Scott’s work — “Have you heard . . . ?” From its inception as a doctoral dissertation in 1986, through its endless citation by scholars in a variety of fields down to the present, The Common Wind has long occupied an unusual place in the world of scholarship.

I vividly recall the moment I first heard. Julius S. Scott’s friend and mentor at Duke University, Peter Wood, had come in 1985 to Georgetown University, where I taught at the time, to give a lecture. Afterward, as we crossed “Red Square” and discussed questions that arose about his talk, Wood mentioned that he had a PhD student who was studying the movement by sea of the ideas and news of the Haitian Revolution during and after the 1790s, the decade in which the Atlantic was in flames, from Port-au-Prince to Belfast to Paris and London.

My first words to Wood were, “How on earth can someone study that?” Bear in mind, I had recently completed a dissertation on eighteenth-century Atlantic sailors, so if anyone could have been expected to know how Scott did it, it might have been me. Even so, I was stunned by Wood’s description of the project — and more than curious to learn more. Wood put us in touch, Scott and I began to correspond, and a year or so later, after its submission and defense, I read “The Common Wind.” I was convinced then, and I am convinced now, that it is one of the most creative historical studies I have ever read.

Scott takes on an issue that long vexed slaveowners around the Atlantic — what one of them in 1791 called the “unknown mode of conveying intelligence amongst Negroes.” Intelligence is precisely the right word, for the knowledge that circulated on “the common wind” was strategic in its applications, linking news of English abolitionism, Spanish reformism, and French revolutionism to local struggles across the Caribbean. Mobile people used webs of commerce and their own autonomous mobility to form subversive networks, of which the ruling classes of the day were keenly aware even if latter-day historians, until Scott, were not.

Scott thus creates a new way to see one of history’s biggest themes, what Eric Hobsbawm famously called “the age of revolution.” He shifts our view in two directions: we see the flaming epoch from below and from the seaside. By emphasizing the men and women who connected by sea Paris, Sevilla, and London to Port-au-Prince, Santiago de Cuba, and Kingston, and who then in small vessels connected ports, plantations, islands, and colonies to each other, Scott creates a new, highly imaginative transnational geography of struggle. Instances of resistance from below in various, hitherto disconnected parts of the world now appear as constituent parts of a broad human movement. The forces — and the makers — of revolution are illuminated as never before.

The book is populated by long-forgotten figures who once upon a time inspired stories of their own. A Cap Français runaway called himself “Sans-Peur” (“Without Fear”) — truly a name with a message, both for his fellow enemies of slavery and for anyone who might try to hunt him down. Nameless African market women in Saint Domingue called each other “sailor,” expressing through their greetings a form of solidarity that stretched back to the seventeenth-century buccaneers. John Anderson, known as “Old Blue,” was a Jamaican sailor who escaped his owner with a huge iron collar around his neck. He eluded recapture along the waterfront for fourteen years, during which time his reputation was “as long and distinctive as his graying beard.” The richness of the book’s narrative is extraordinary.

A key to Scott’s work is the port city, where mobile peoples from around the world came together to work. Brought into cooperative laboring relationships by transnational capital to move the commodities of the world, these workers translated their cooperation into projects of their own. Scott shows how the capitalist mode of production actually worked in port cities, not only generating massive wealth through trade, but also producing oppositional movements from below. As the miserable Lord Balcarres, governor of Jamaica, explained in 1800, “turbulent people of all nations” made up the lower class of Kingston. Characterized by “a general levelling spirit throughout,” they were primed for insurrection — ready to torch the town and leave it in ashes. Scott shows how the waterfront became a “cauldron of insurrection” and how transnational “cycles of unrest” erupted in many port cities during the 1730s, the 1760s, and the 1790s. The last of these exploded into an Atlantic-wide revolution.

Scott was doing transnational and Atlantic history long before that approach and that field had become cutting-edge forces in historical writing. To say that he was ahead of his time would be an understatement. Many of the sentences he penned more than thirty years ago read as if they were written yesterday. “Sweeping across linguistic, geographic, and imperial boundaries, the tempest created by mobile people in . . . slave societies would prove a major turning point in the history of the Americas.” Such conclusions are based on deep archival research carried out in Spain, Britain, Jamaica, and the United States, and on published primary sources from and about Cuba, Saint Domingue, and other parts of the Caribbean. They tell a startling new story in the proud annals of “history from below.”

Scott has drawn creatively on a rich body of radical scholarship in conceptualizing the book. From Christopher Hill’s The World Turned Upside Down: Radical Ideas in the English Revolution (1972), Scott takes the notion of the “masterless,” originally used to describe the footloose, often expropriated men and women of the seventeenth century, to create something entirely new, “the masterless Caribbean,” the men and women who occupied and moved around and between the highly “mastered” spaces of the plantation system. From C. L. R. James’s Mariners, Renegades, and Castaways: Herman Melville and the World We Live In (1953), Scott takes the motley, floating subjects who connected the world in the early modern era and who later came to life in Melville’s sea novels. Scott also draws on the work of Georges Lefebvre, the great historian of the French Revolution who coined the phrase “history from below” in the 1930s and who showed, in his classic work The Great Fear of 1789: Rural Panic in Revolutionary France (1932), how rumor drove a great social and political upheaval. Rumors of emancipation, spread by masterless motley crews, became a material force across the Caribbean and around the Atlantic during the 1790s.

The Common Wind is one of those rare works that conveys not only new evidence and new arguments, though there are plenty of both, but an entirely new vision of a historical period, in this case the age of revolution, one of the most profound moments in world history. The Haitian Revolution, Wordsworth would be happy to know, “dies not.” Julius S. Scott follows in the wake of the undefeated people he studies by telling us a new story — of exultation and agony, of love and revolution. He has given us a gift for the ages.

Marcus Rediker is distinguished professor of Atlantic history at the University of Pittsburgh and author, most recently, of The Fearless Benjamin Lay: The Quaker Dwarf Who Became the First Revolutionary Abolitionist.