books Is a Civil War Ahead?

A year after the attack on the Capitol, the country is suspended between democracy and autocracy. That sense of uncertainty radically heightens the likelihood of episodic bloodletting in America, and even the risk of civil war. 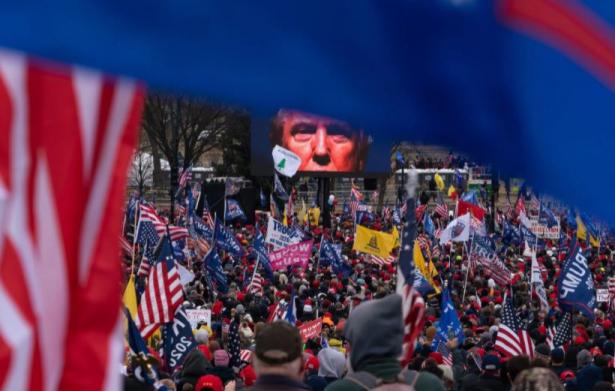 The storming of the Capitol by white supremacists and other militant groups marked a dangerous shift in American politics and national stability., Photograph by Peter van Agtmael / The New Yorker

The edifice of American exceptionalism has always wobbled on a shoddy foundation of self-delusion, and yet most Americans have readily accepted the commonplace that the United States is the world’s oldest continuous democracy. That serene assertion has now collapsed.

On January 6, 2021, when white supremacists, militia members, and maga faithful took inspiration from the President and stormed the Capitol in order to overturn the results of the 2020 Presidential election, leaving legislators and the Vice-President essentially held hostage, we ceased to be a full democracy. Instead, we now inhabit a liminal status that scholars call “anocracy.” That is, for the first time in two hundred years, we are suspended between democracy and autocracy. And that sense of uncertainty radically heightens the likelihood of episodic bloodletting in America, and even the risk of civil war.

This is the compelling argument of “How Civil Wars Start,” a new book by Barbara F. Walter, a political scientist at the University of California San Diego. Walter served on an advisory committee to the C.I.A. called the Political Instability Task Force, which studies the roots of political violence in nations from Sri Lanka to the former Yugoslavia. Citing data compiled by the Center for Systemic Peace, which the task force uses to analyze political dynamics in foreign countries, Walter explains that the “honor” of being the oldest continuous democracy is now held by Switzerland, followed by New Zealand. In the U.S., encroaching instability and illiberal currents present a sad picture. As Walter writes, “We are no longer a peer to nations like Canada, Costa Rica, and Japan.”

In her book and in a conversation for this week’s New Yorker Radio Hour, Walter made it clear that she wanted to avoid “an exercise in fear-mongering”; she is wary of coming off as sensationalist. In fact, she takes pains to avoid overheated speculation and relays her warning about the potential for civil war in clinical terms. Yet, like those who spoke up clearly about the dangers of global warming decades ago, Walter delivers a grave message that we ignore at our peril. So much remains in flux. She is careful to say that a twenty-first-century American civil war would bear no resemblance to the consuming and symmetrical conflict that was played out on the battlefields of the eighteen-sixties. Instead she foresees, if the worst comes about, an era of scattered yet persistent acts of violence: bombings, political assassinations, destabilizing acts of asymmetric warfare carried out by extremist groups that have coalesced via social media. These are relatively small, loosely aligned collections of self-aggrandizing warriors who sometimes call themselves “accelerationists.” They have convinced themselves that the only way to hasten the toppling of an irredeemable, non-white, socialist republic is through violence and other extra-political means.

Walter makes the case that, as long as the country fails to fortify its democratic institutions, it will endure threats such as the one that opens her book: the attempt, in 2020, by a militia group in Michigan known as the Wolverine Watchmen to kidnap Governor Gretchen Whitmer. The Watchmen despised Whitmer for having instituted anti-covid measures in the state—restrictions that they saw not as attempts to protect the public health but as intolerable violations of their liberty. Trump’s publicly stated disdain for Whitmer could not have discouraged these maniacs. The F.B.I., fortunately, foiled the Wolverines, but, inevitably, if there are enough such plots—enough shots fired—some will find their target.

America has always suffered acts of political violence—the terrorism of the Klan; the 1921 massacre of the Black community in Tulsa; the assassination of Martin Luther King, Jr. Democracy has never been a settled, fully stable condition for all Americans, and yet the Trump era is distinguished by the consuming resentment of many right-wing, rural whites who fear being “replaced” by immigrants and people of color, as well as a Republican Party leadership that bows to its most autocratic demagogue and no longer seems willing to defend democratic values and institutions. Like other scholars, Walter points out that there have been early signs of the current insurgency, including the bombing of the Alfred P. Murrah Federal Building in Oklahoma City, in 1995, which killed a hundred and sixty-eight people. But it was the election of Barack Obama that most vividly underlined the rise of a multiracial democracy and was taken as a threat by many white Americans who feared losing their majority status. Walter writes that there were roughly forty-three militia groups operating in the U.S. when Obama was elected, in 2008; three years later there were more than three hundred.

Walter has studied the preconditions of civil strife all over the world. And she says that, if we strip away our self-satisfaction and July 4th mythologies and review a realistic checklist, “assessing each of the conditions that make civil war likely,” we have to conclude that the United States “has entered very dangerous territory.” She is hardly alone in that conclusion. The International Institute for Democracy and Electoral Assistance in Stockholm recently listed the U.S. as a “backsliding” democracy.

The backsliding was never more depressingly evident than in the weeks after January 6th, when Mitch McConnell, after initially criticizing Donald Trump’s role in the insurrection, said that he would support him if he were the Party’s nominee in 2024. Having stared into the abyss, he pursued the darkness.

Not so long ago, Walter might have been considered an alarmist. In 2018, Steven Levitsky and Daniel Ziblatt published their Trump-era study, “How Democracies Die,” one of many books that sought to awaken American readers to the reality that the rule of law was under assault just as it was in much of the world. But, as Levitsky told me, “Even we couldn’t have imagined January 6th.” Levitsky said that until he read Walter and other well-respected scholars on the subject, he would have thought that warnings of civil war were overwrought.

Unlike Russia or Turkey, the United States is blessed with a deep experience of democratic rule, no matter how flawed. The courts, the Democratic Party, local election officials in both parties, the military, the media—no matter how deeply flawed—proved in 2020 that it was possible to resist the darkest ambitions of an autocratic President. The guardrails of democracy and stability are hardly unassailable, but they are stronger than anything that Vladimir Putin or Recep Tayyip Erdoǧan has to contend with. In fact, in his attempt to be reëlected, Trump did draw the largest Republican vote ever—and he still lost by seven million votes. That, too, stands in the way of fatalism.

The backsliding was never more depressingly evident than in the weeks after January 6th, when Mitch McConnell, after initially criticizing Donald Trump’s role in the insurrection, said that he would support him if he were the Party’s nominee in 2024. Having stared into the abyss, he pursued the darkness.

Not so long ago, Walter might have been considered an alarmist. In 2018, Steven Levitsky and Daniel Ziblatt published their Trump-era study, “How Democracies Die,” one of many books that sought to awaken American readers to the reality that the rule of law was under assault just as it was in much of the world. But, as Levitsky told me, “Even we couldn’t have imagined January 6th.” Levitsky said that until he read Walter and other well-respected scholars on the subject, he would have thought that warnings of civil war were overwrought.

“We’re not headed to fascism or Putinism,” Levitsky told me, “but I do think we could be headed to recurring constitutional crises, periods of competitive authoritarian and minority rule, and episodes of pretty significant violence that could include bombings, assassinations, and rallies where people are killed. In 2020, we saw people being killed on the streets for political reasons. This isn’t apocalypse, but it is a horrendous place to be.”

The battle to preserve American democracy is not symmetrical. One party, the G.O.P., now poses itself as anti-majoritarian and anti-democratic. And it has become a Party less focussed on traditional policy values and more on tribal affiliation and resentments. A few figures, including Liz Cheney and Mitt Romney, know that this is a recipe for an authoritarian Party, but there is no sign of what is required to reverse the most worrying trends: a broad-based effort among Republican leaders to stand up and join Democrats and Independents in a coalition based on a reassertion of democratic values.

As the anniversary of the insurrection is observed, the greater drama is not obscure. We are a country capable of electing Barack Obama and, eight years later, Donald Trump. We are capable of January 5th, when the state of Georgia elected two senators, an African American and a Jew, and January 6th, when thousands stormed the Capitol in the name of a preposterous conspiracy theory.

“There are two very different movements at once in the same country,” Levitsky said. “This country is moving towards multiracial democracy for the first time. In the twenty-first century we have a multiracial democratic majority supportive of a diverse society and of having the laws to insure equal rights. That multiracial democratic majority is out there, and it can win popular elections.” And then there is the Republican minority, which too often looks the other way as dangerous extremists act on its behalf. Let’s hope the warnings about a new kind of civil war come to nothing, and we can look back on books like Walter’s as alarmist. But, as we have learned with the imperilled state of our climate, wishing does not make it so.

[David Remnick has been editor of The New Yorker since 1998 and a staff writer since 1992. He is the author of “The Bridge: The Life and Rise of Barack Obama.”]