King spent his last birthday organizing poor people of all races against immoral spending priorities. We need that revolution today. 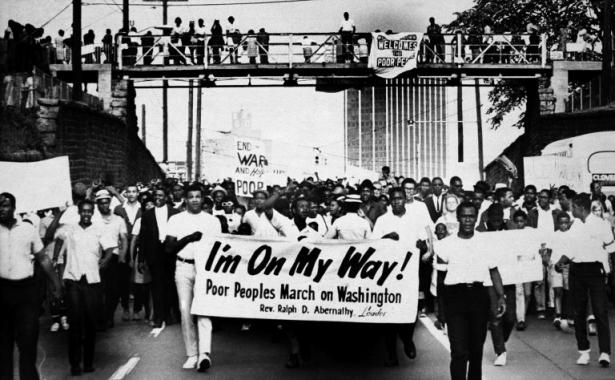 On January 15, 1968, Martin Luther King, Jr. was leaving a planning meeting for the Poor People’s Campaign when he was called back into the room. It was his birthday — his last, it would turn out.

The staff of the Southern Christian Leadership Conference would usually give King a new suit, but this year they wanted to make him laugh.

Xernona Clayton teased, “We know how fond you are of our president Lyndon Johnson,” which got a laugh. Then she pulled out a metal cup engraved: “We are cooperating with Lyndon’s War on Poverty. Drop coins and bills in cup.”

King laughed deeply, but the joke was all too true.

In 1968, the Vietnam War was costing billions while the War on Poverty fell to the side, like spare change in a cup. Today too, our government has said yes to increasing the military budget to $778 billion for next year alone — and no to $1.7 trillion over 10 years for the Build Back Better Act.

So here we are again on King’s birthday, throwing millions of children back into poverty by letting the expanded child tax credits expire, offering no more than change in a cup.

As a Christian ethicist who studies King, I think it’s important to remember that he spent his last months organizing a campaign of the poor to challenge political priorities like these.

He brought together poor people who were already organizing their communities, along with civil rights leaders and faith leaders. The plan was to bring 3,000 poor people of all races to occupy Washington, D.C., and confront the administration and Congress about their failure to address the triple evils of racism, poverty, and war.

Although King was assassinated before the campaign launched, the Poor People’s Campaign went forward in the spirit of King’s words from the year before, when he challenged the idea that coins in a cup were enough.

“True compassion is more than flinging a coin to a beggar,” he said at his famous Riverside Church speech in 1967. “It comes to see that an edifice which produces beggars needs restructuring.”

Calling for “a true revolution of values,” King also warned: “A nation that continues year after year to spend more money on military defense than on programs of social uplift is approaching spiritual death.”

His words ring too true today. True compassion is not flinging coins at poverty while spending four times as much on a war budget or watching the wealth of CEOs grow exponentially while workers’ wages lag decades behind.

As in 1968, it will take a campaign of the poor to move us towards the revolution of values we need in these times.

Launched in 2018 on the 50th anniversary of the original, the new Poor People’s Campaign: A National Call for Moral Revival has been growing across 40 states, organizing people impacted by systemic injustice and moral leaders to insist that our elected officials listen to our demands, defend our democracy, and pass a moral budget that restructures our poverty-producing system.

Amid a global pandemic and ongoing attacks on democracy and on the poor, we have asserted our right to far more than change in a cup. We are now organizing for the Mass Poor People’s Assembly and Moral March on Washington on June 18, 2022.

Already there are meetings happening in state coordinating committees across the country to plan massive delegations to Washington, D.C., pulling the 140 million poor and low-income people in the nation together across geography, partisan lines, race, and ethnicity. We are coming to demand that our elected officials make real policies to fully address poverty and low wealth from the bottom up.

We want to observe King’s birthday the way he did — by building the power of the poor for a radical revolution of values.

Colleen Wessel-McCoy is author of Freedom Church of the Poor: Martin Luther King Jr’s Poor People’s Campaign (Lexington, 2021), and a Neely Visiting Professor of Religion and Public Policy at Arizona State. She has partnered with the Kairos Center for Religions, Rights, and Social Justice for over a decade. This op-ed was distributed by OtherWords.org.

OtherWords commentaries are free to re-publish in print and online — all it takes is a simple attribution to OtherWords.org. To get a roundup of our work each Wednesday, sign up for our free weekly newsletter here.