Focus on national politics in Brazil, Chile, France, Honduras, Libya and Turkey, and saving the planet 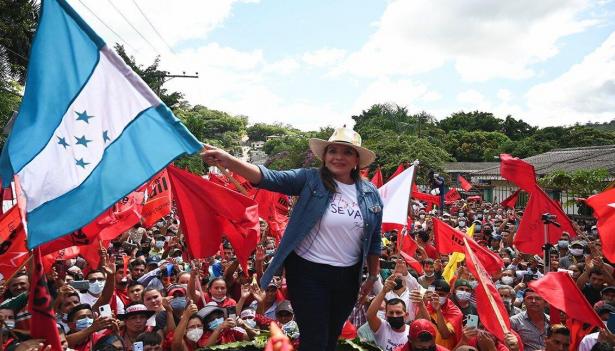 Xiomara Castro on the campaign trail in Honduras. Credit, @brunorguezp

Tricontinental: Institute for Social Research and the Instituto Simón Bolivar in Caracas, Venezuela have started an international discussion responding to the broad crises of our times. We brought together twenty-six research institutes from around the world whose work has now culminated in a report called A Plan to Save the Planet.

Two women stand out among the crowd of 73 candidates in the upcoming Libyan election. Laila bin Khalifa and Honeda Tomeya are making history by becoming the only two women candidates in the first ever presidential elections since the country gained independence in 1951.

Ten months ahead of the first round on October 2, political analysts wonder whether President Bolsonaro will attempt to obstruct the transition of power if he loses to former President Luiz Inácio Lula da Silva. The country’s armed forces, which have accumulated an enormous amount of political power, are set to be the key power brokers if Lula defeats Bolsonaro.

A group of political activists will attempt o save the bitterly divided French left from an electoral catastrophe in the presidential election with a “people’s primary” to designate a single candidate. The Primaire Populaire was initiated by young people dismayed by the fractures that could mean no leftwing or socialist figure will reach the second round of the election in April.

The student collectives that formed the core of the public education movement eventually led to the creation of new parties, many of which gathered under the Frente Amplio or “Broad Front” coalition. Allied with the Communist Party, they later became the basis of what is known today as Apruebo Dignidad, an electoral alliance that supported Boric’s candidacy.

The CHP, a centre-left secular-nationalist party, has in recent years managed to score a number of major electoral victories, even winning over sections of the public who might have never considered them in past. They have also formed alliances, both official and tacit, with a wide spectrum of other opposition parties, including the left-wing pro-Kurdish People’s Democracy Party.

This could be a new Honduras. And as the first woman president, Xiomara Castro is one part of a larger legacy of women actors and their daughters who made her victory possible.