What can all of us do now to overcome opposition to voting rights from two Democrats, all 50 Republican senators and nearly all 212 Republican House members? 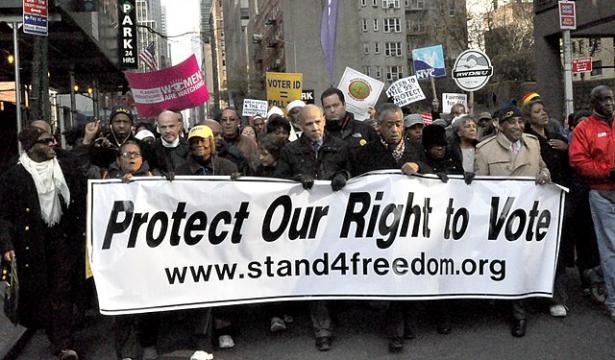 Asking what President Biden and House and Senate Democrats can possibly do now to protect voting rights when two Democratic senators refuse to join them in passing legislation supporting the fundamental principle of American democracy is the wrong question.

The real question is for all the rest of us, the overwhelming majority of Americans who believe every eligible voter has a Constitutionally guaranteed right to vote. The question is: What can all of us do now to overcome opposition to voting rights from two Democrats, all 50 Republican senators and nearly all 212 Republican House members?

When the current opposition to voting rights is clearly identified by the numbers, it’s obvious what American voters have to do. They have to elect more Democratic senators.

The reason two Democrats, Joe Manchin and Kyrsten Sinema, can block civil rights legislation supported by all 48 other Democratic senators is because the Senate is evenly divided 50-50 between Democrats and Republicans and Republicans no longer support voting rights.

Democracy is not sustainable in a country where only one of its two major political parties supports voting rights. And it’s even worse than that. Last year 19 Republican state legislatures passed new laws specifically aimed at disenfranchising voters based on race or living in counties likely to vote Democratic. Some even allow Republican legislators to throw out the results of presidential elections in their states just like President Trump urged them to do after he was defeated.

“The goal of the former president and his allies is to disenfranchise anyone who votes against them, simple as that,” President Biden said in Atlanta. “The facts won’t matter; your vote won’t matter. They’ll just decide what they want and then do it. That’s the kind of power you see in totalitarian states, not in democracies.”

Wisconsin has a good chance of adding one of those Senate seats by defeating Ron Johnson, the poster child for all the lying Republicans on the wrong side of the most important issues in the midterms. Johnson falsely claims vaccines are dangerous, the violent attack on the Capitol was peaceful and Biden’s defeat of Trump was fraudulent.

Democrats are considered strongly competitive in eight other Senate races including Pennsylvania, which Biden narrowly won, and North Carolina, which Trump narrowly won. In Georgia, Democratic Sen. Raphael Warnock, pastor of Martin Luther King Jr.’s Ebenezer Baptist Church, was elected in 2020 to complete an unexpired term. He’s running for a full term in the midterms with popular gubernatorial candidate Stacey Abrams, narrowly (and questionably) defeated by Republican Brian Kemp who ran the election as secretary of state in 2018. Trump is trying to sabotage Kemp’s election by endorsing a primary challenger because Kemp certified Biden’s election victory in Georgia.

Strong Democratic Senate candidates can now compete financially with Republican candidates who are often well-funded by rightwing billionaires to do their bidding. Act Blue is a national network of politically progressive small donors that has equalized campaign contributions between Democrats and Republicans in important Senate races.

Another advantage for Democrats is since Senate races are statewide elections, they’re impossible for Republicans to gerrymander. Gerrymandering is the corrupt tactic Republicans in Wisconsin and many other states used for a decade to pack Democrats into the fewest possible legislative and congressional districts. It creates permanent Republican majorities regardless of which party receives the most votes. Whoever receives the most votes in statewide Senate elections wins. What a concept.

Florida Republican Sen. Marco Rubio, facing a strong Democratic challenge from Congresswoman Val Demings in the midterms, has bizarrely attacked the drive by Biden and Democrats for voting rights as a “radical progressive agenda” supported by “Marxists in Washington, D.C.”  Voting rights weren’t considered a Marxist plot until the Republican Party withdrew its support for American democracy under Trump.

Martin Luther King Day used to be when all politicians, Democrat or Republican, found quotes from King to claim his support. Here’s one from a voting rights speech King gave in 1957. He was lamenting the Jim Crow practices of white southerners denying voting rights to African Americans: “These persons gain prominence and power by the dissemination of false ideas and by deliberately appealing to the deepest hate responses within the human mind.” Sounds a lot more recent, doesn’t it?

The fight for equal rights for all Americans won’t end no matter what happens in the Senate this week on voting rights. Creating a more perfect union has always been the life’s work of every American who believes in democracy. It’s too bad Republicans no longer do.

[Joel McNally is a national-award-winning newspaper columnist and a longtime political commentator on Milwaukee radio and television. Since 1997, Joel has written a column for the Shepherd Express where he also was editor for two years.]