Latino Democrats are increasingly worried that time is running out to do anything that would make a significant difference ahead of the 2022 midterms, when the party needs a robust Latino turnout to preserve its slim majorities in Congress. 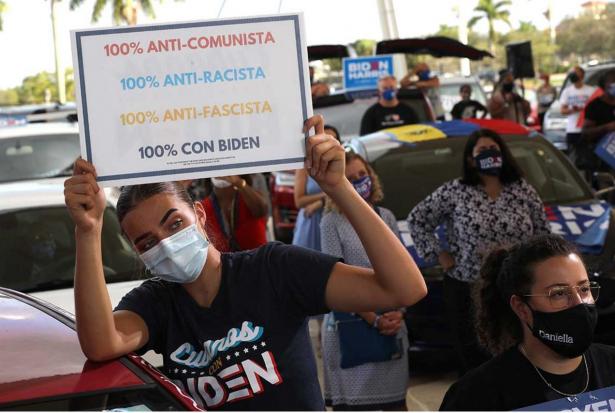 While President Joe Biden captured the majority of the Latino vote in 2020, Trump improved his margins in 78 of the nation’s 100 majority-Hispanic counties.,Chip Somodevilla // Politico

But Latino Democratic leaders and operatives are increasingly worried that time is running out to do anything that would make a significant difference ahead of the 2022 midterms, when the party needs a robust Latino turnout to preserve its slim majorities in Congress.

For years, those leaders have warned that the party needs to invest earlier in outreach, hire more Latinos for decision-making positions and talk to Latino voters about more issues than just immigration.

But even after a presidential election marked by former President Donald Trump’s impressive gains with Latinos across the country — not just in Latino-heavy South Texas and South Florida — they see a lack of urgency in addressing those issues. Between that and a failure to keep pace with GOP efforts to communicate with Latinos on newer platforms, there’s a creeping fear that the traditional Democratic advantage with Latino voters will continue to erode in November.

“Intellectually, Democrats know they have a problem,” said Maria Teresa Kumar, founding president and CEO of Voto Latino, a grassroots political organization. “But I haven’t seen the investment that needs to happen for it to translate.”

Latinos — the largest of the nation’s fastest-growing demographic groups — have long been viewed as solidly blue Democratic voters. While President Joe Biden captured the majority of the Latino vote in 2020, Trump improved his margins in 78 of the nation’s 100 majority-Hispanic counties.

Since then, a spate of reports, analyses and polls have made it clear that the party has reason to worry if it doesn’t change its current approach. A recent report by Democratic research firm Equis found that a majority of Latinos believe that Democrats take them for granted. It also found that Trump’s policies on the coronavirus pandemic and economy were popular among Latinos and that GOP attacks claiming Democrats embrace socialism have been effective.

Another analysis by Democratic voter data firm Catalist found that, while six in 10 Latino voters backed Biden, Trump’s share of the Latino vote increased by 8 percentage points compared to 2016.

Kumar points to Florida — where Trump saw some of his largest gains with Latinos, both among conservative-leaning Cuban Americans and voters from other Latin American countries, such as Colombia, Venezuela and Nicaragua — as an example of Democrats having “a deficit in communications and connection.”

“Trump and the Republican Party never left Florida. They kept cultivating and communicating with the Latino community,” Kumar said. “Sure, a lot of it was disinformation and messaging that Biden is a communist and a socialist, but they kept doing it — and it was effective.”

In that district, which is more than 30 percent Latino, Democratic incumbent Gil Cisneros lost to now-GOP Rep. Young Kim by just over 4,000 votes.

In the nearby 48th District, which is about 20 percent Latino, Democrats spent just $33,000 in Spanish-language ads, compared to more than $12 million spent in English-language ads. Democratic incumbent Harley Rouda lost narrowly there to Republican Michelle Steel.

“It should be a wake-up call to Democrats. When there are no people of color at the decision-making level of a campaign, our constituency becomes an afterthought and you underperform because you’re not reaching out to them with the same priority as white suburban ‘persuadable’ voters,” said Chuck Rocha, a Democratic strategist and former senior adviser to Sen. Bernie Sanders’ (I-Vt.) presidential campaign.

Latino operatives say part of the problem is that there is still a contingent in the party denying there’s a ‘Latino problem,’ despite mounting evidence that it’s no longer a certainty that Democrats will receive an overwhelming majority of the Latino vote in elections.

“Is it going to change? Well, the first step is admitting there’s a problem, and there’s a lot of people in my movement and my party that don’t,” Rocha said. “I love Democrats, and I’ve never voted for anybody that wasn’t a Democrat, and I’ll admit there’s a problem… because that’s the only way to change.”

One reason why Democrats fail to change their game plan with Latinos, Rocha said, is because campaigns don’t hire Latinos for top jobs and keep hiring the same consultants that have lost races in Latino-heavy districts. In many of the 2020 races, all the Spanish-language ads by Democrats were done in the last 30 days before the election, he said, signaling that Latinos were not a priority. The ads also came after many Latinos already had hardened opinions about the candidates, making it too late to persuade voters, he added.

Meanwhile, he said, Republicans saw success in 2020 as they “started spending real resources in bilingual communications to a broad target” and connected on Facebook, YouTube and via mail with a “whole bunch of Latinos who have never heard a compelling argument from Democrats about why they should vote for them.”

Some Latino Democratic operatives noted that the GOP is making a concerted effort to make inroads with Latinos and is already spending money to communicate with Latinos ahead of the 2022 midterms.

“Democrats are not doing that in the same way. They’re trying to get up to speed, and I think they realize they’re kind of outgunned right now,” said Colin Rogero, partner and creative director for Democratic firm 76 Words, who has worked on many campaigns in Latino-heavy districts. “And that’s the biggest challenge we face going in: Our messages are coming in late — and we’re not going to be able to win that way anymore.”

Stephanie Valencia, co-founder and president of Equis, explained that a large majority of Latinos are getting their news and information now from YouTube, a “place largely uncontested by progressives.” Democrats, she said, need to work on how they engage with Latinos there and on other platforms, like WhatsApp, which is widely popular among Latin Americans and other immigrant communities in the U.S.

There have been some tangible improvements since 2020, particularly with spending and hiring at the party committees. The Democratic Congressional Campaign Committee, for example, has been hiring Latinos to senior positions, built a team focused on diversity and changed their process for soliciting vendors to bring in more diverse ones, Latino operatives said.

Still, by ceding ground on issues that defined the party for decades, they said, Democrats are facing an erosion in support.

“When we as Democrats allow Republicans like Donald Trump to steal our economic populist message, we should be knocked up around the head,” Rocha said. “We allow them to have that narrative when we’re talking about whatever social issue of the day is a hot button instead of digging into populist economic issues that say, ‘We are here to work for you.’”

Kristian Ramos, campaign manager for Way to Win’s midterm message research project and a Latino outreach specialist, said his concern isn’t that “suddenly Latinos are going to become Republicans,” but, instead, that support for Democrats is “soft.”

A recent poll by Way to Win found that 60 percent of Hispanic voters view the Democratic Party favorably compared to 35 percent having a favorable view of the Republican Party. Ramos explained that Democrats should be aiming to win 70 percent or more of the Latino vote to ensure success.

All of the nearly dozen Latino strategists interviewed by POLITICO underscored that Democrats need to do a better job at selling their victories, particularly when it comes to the economy and jobs, to the entire country, not just Latinos.

Ramos and others argued that Biden’s American Rescue Plan, the stimulus bill passed in March 2021, has already benefited many Latinos and that his infrastructure bill will do the same, but people don’t know it. To change that, the administration needs to spend more time talking about its wins on TV and social media and Democratic-aligned groups need to spend money doing the same.

“The irony here is Democrats have been really responsive to the economy, but nobody knows about it and that’s a problem,” Ramos said. “To the degree with which Democrats can talk about the fact that they’ve created a lot of jobs unambiguously and are helping workers and families, that’s a great message in English and Spanish.”

“Now, am I confident they will tell that story?” Ramos paused. “I hope they do. They need to.”

[Sabrina Rodríguez is an immigration correspondent. Sabrina got her start at POLITICO in 2015 as a participant in the POLITICO Journalism Institute and later interned here twice. She most recently was a POLITICO fellow, covering both trade and agriculture issues.

A Miami native and Northwestern University grad, she has also interned at Chalkbeat New York, Miami New Times and The Miami Herald. She covered the first months of the Trump administration at Diario Perfil in Buenos Aires, Argentina.]