“Society loses its moral grounds when we stoop to the actions of the most broken people to punish those who hurt people. But I’m living proof that hurt people not only hurt people — we can heal.” 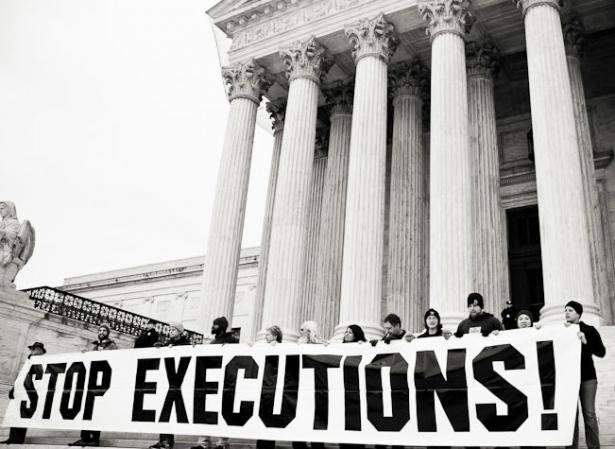 On January 17, 1977, Gary Gilmore was executed by firing squad, shot through the heart, at Utah State Prison. He was the first person to be executed after the death penalty had been reinstated in the United States in 1976. This year, to mark the 45th anniversary of this execution, which coincided with Martin Luther King Jr. Day, Death Penalty Action and a coalition of death penalty abolitionists gathered in Washington, D.C. calling for an end to the federal death penalty and all executions in the United States.

After a 17-year hiatus, the U.S. resumed federal executions a year and a half ago. Between July 2020 and January 2021, the Trump administration executed 13 people who were on federal death row, a number surpassing the total number of federal executions that had taken place over the preceding 70 years (1949-2019) spanning 11 presidential administrations.

Those who were executed under the Trump administration included: Daniel Lewis Lee, Wesley Ira Purkey, Dustin Lee Honken, Lezmond Mitchell, Keith Nelson, William LeCroy Jr., Christopher Vialva, Orlando Hall, Brandon Bernard, Alfred Bourgeois, Lisa Montgomery, Corey Johnson and Dustin John Higgs. Among this group, considered “irredeemable” by the U.S. government, was a man living with Alzheimer’s and schizophrenia; another who was a member of the Navajo Nation and was the only Native American on federal death row; and another who was a former soldier. One of the executed men practiced Messianic Judaism, while another was a practicing Muslim. The only woman who was on federal death row under Trump — executed in January 2021 — was sexually trafficked by her mother. These sparse details tell us that their existence was not solely defined by the crimes for which they were convicted and ultimately executed, but that each of these individuals has a much fuller story that comprises who they were as human beings. Discounting and ignoring the humanity of those on death row is intrinsic to a system that kills human beings as part of its judicial practice.

As a presidential candidate, Joe Biden had pledged to end the federal death penalty, but the administration seems to have backtracked on that promise. Last July, the Biden administration placed a moratorium on federal executions in order to review the policies the Trump administration enacted to carry out this unprecedented execution spree. Yet Biden has not taken steps to actually end the practice. And while federal executions have been halted for the time being, the Department of Justice has defended and sought the death penalty in the high-profile cases of Dzhokar Tsarnaev and Dylann Roof.

Cases like Roof’s and Tsarnaev’s are cited by proponents of the death penalty to justify its use. The idea that the death penalty is necessary to punish the “worst of the worst” — those like Roof and Tsarnaev, who commit the most heinous of crimes — is one that has been proliferated in the U.S. in defense of a practice that most countries in the world have outlawed.

Darby Tillis, who along with his codefendant, Perry Cobb, was the first to be exonerated from Illinois’s death row in 1987, was a fiery and outspoken activist against the death penalty until his death in 2014. We had many conversations about his experience on death row, and once, I asked him about John Wayne Gacy, with whom he was incarcerated. His words were telling. “He was a quiet man who kept to himself,” Tillis told me. “When they executed him, we all knew that we would be next.”

When the death penalty is sought for people like Gacy or Roof and Tsarnaev, these executions do not take place in a vacuum. “By making a monster out of Gacy, it gives the impression that the system works. But what it really does is let the system off the hook for taking the lives of those it deems expendable,” said Renaldo Hudson, who survived 37 years of incarceration in Illinois, including 13 on death row.

Girvies Davis was one of those men considered “expendable” by the state of Illinois. One year after Gacy’s execution, the state executed Davis, a Black man who was convicted by an all-white jury of killing Charles Biebel, an 89-year-old white man. Scholar-activist Dylan Rodriguez argues that “the very logics of the overlapping criminal justice and policing regimes systematically perpetuate racial, sexual, gender, colonial, and class violence through carceral power.” Along these lines, it is not surprising that the evidence used to convict Davis was problematic and filled with holes. Prison guards claimed that Davis had passed them a note confessing to Biebel’s murder while he was incarcerated on another charge. But Davis was functionally illiterate at the time and could not read or write. And, on the night he supposedly passed guards this note, prison logs show that he was signed out of the prison.

Racial bias against defendants of color has always affected who is prosecuted, convicted, sentenced to death and executed. Illinois, now known for its high number of death row exonerations, executed men like Girvies Davis before it abolished the death penalty.

Like Davis, Orlando Hall, who was executed by the federal government during Trump’s spree, also faced an all-white jury. In a written testimony of his journey of redemption, he describes his experience:

How did I feel as a black man when I saw my all-white jury? I felt like the thousands before me — doomed! I was never under the false illusion that I would receive a fair trial or a jury of my peers. The system is set up to punish people of color, especially poor people of color. I was an uneducated man, functioning illiterate at best, but I also wasn’t a fool.

The federal death penalty is not immune from the issues that plagued Illinois. Citing the systemic racism of the death penalty, Rep. Ayanna Pressley, Sen. Dick Durbin, and more than 70 of their colleagues reintroduced the Federal Death Penalty Prohibition Act in 2021. “State-sanctioned murder is not justice, and the death penalty, which kills Black and [B]rown people disproportionately, has absolutely no place in our society,” Pressley said. Before 2021 came to a close, on December 15, Representatives Pressley and Jamie Raskin wrote a letter to U.S. Attorney General Merrick Garland requesting a briefing on the status of the Department of Justice’s review of the Trump administration’s federal death penalty policies and practices, asking whether the Biden administration plans to resume executions and procure the controversial drug pentobarbital sodium for use in those executions.

It remains to be seen what the Biden administration will do in 2022. To hold Biden to his campaign promise to end the federal death penalty, the coalition of activists who gathered in D.C. to mark the 45th anniversary since the first execution in the modern death penalty era voiced their support for the Federal Death Penalty Prohibition Act and held a rally and march at the Capitol calling for a new wave of activism to end the death penalty.

At an indoor rally, activist Art Laffin shared that he sought mercy and compassion toward the mentally ill homeless man who had stabbed his brother multiple times and killed him. He called for our society to provide a continuum of care for all people like him “so future tragedies like what happened to my brother won’t be repeated again.”

A growing number of murder victims’ loved ones have joined the call to abolish the death penalty, including for people like Timothy McVeigh, who was the first to be executed by the federal government after the death penalty was reinstated in 1988. McVeigh is often cited as an example of someone who deserved the death penalty, with the “logic” that not punishing him by death would be an affront to all the lives lost in the Oklahoma City bombing.

But Bud Welch, the father of Oklahoma City bombing victim Julie Welch, fought tirelessly to stop McVeigh’s execution. Welch even met with McVeigh’s father, Bill, in his Oklahoma City home. In a powerful account of this unique meeting in Grace from the Rubble: Two Fathers’ Road to Reconciliation After the Oklahoma City Bombing, Jeanne Bishop writes that Bud Welch “extended the hand of grace to one who should have been his enemy. That hand was taken in return.”

Bishop, who is a public defender, knows the power of this kind of grace because she extended the same to her sister’s killer. These death penalty abolitionists hold that state-sanctioned murder cannot be justified even in the least sympathetic cases. What their examples show is that vengeance and punishment do not have to be our society’s response to even the most heinous acts of violence.

Meanwhile, in Illinois where the death penalty was abolished, over 5,000 people are facing life sentences or de-facto life sentences of 40 years or more, according to Parole Illinois. Not unlike their predecessors on death row, they face an in-house death sentence. Increasingly, those advocating for the abolition of the death penalty are calling for an end to harsh sentencing and an end to death by incarceration (life without parole).

Perhaps Renaldo Hudson, now the education director for the Illinois Prison Project and a visual artist whose work will be shown at an upcoming exhibition at the University of Chicago, sums it up best with his words: “Society loses its moral grounds when we stoop to the actions of the most broken people to punish those who hurt people. The state of Illinois decided that there was nothing redeemable about me. But I’m living proof that hurt people not only hurt people — we can heal.”

Alice Kim is co-editor of The Long Term: Resisting Life Sentences, Working Toward Freedom (Haymarket Books). She co-directs the Justice, Policy and Culture Think Tank and teaches at Stateville Maximum Security Prison with the Prison+Neighborhood Arts/Education Project. She is director of human rights practice at the Pozen Family Center for Human Rights at the University of Chicago. She was previously an organizer with the Campaign to End the Death Penalty and worked closely with the Death Row 10 and others on Illinois’s death row to abolish capital punishment in the United States.