labor The Fight for $20 and a Union: Another California Minimum Wage Earthquake?

California was the first state to implement a $15 minimum wage, and is now at the forefront of raising the wage floor, fast becoming the Fight for $20 and a Union. Can the minimum wage issue impact the mid-term elections?

January 31, 2022 Marty Bennett Beyond Chron
Printer friendly
The Fight for $20 and a Union: Another California Minimum Wage Earthquake? Published January 31, 2022 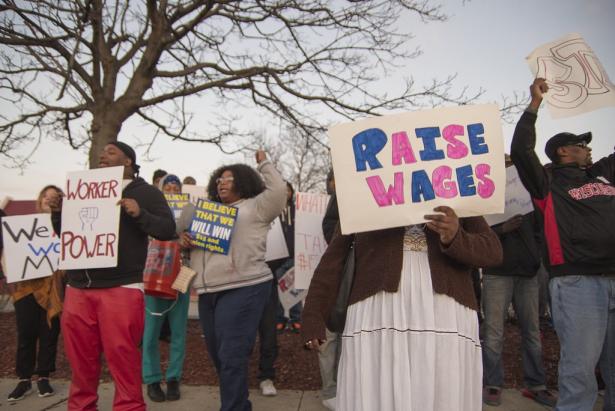 California is the epicenter for a nationwide grassroots movement to raise the wage floor for American workers. On January 1st, the state set $15 an hour as the floor for large employers and $14 an hour for small ones (rising to $15 for all in 2023). Meanwhile, thirty-nine California cities and counties have established higher rates, with Emeryville the highest at $17.13 an hour and most well above $15.

The Fight for Fifteen movement has reshaped public opinion, pushing local and state officials around the country to approve a $15 per hour minimum wage. Eleven states and fifty-four cities and counties have $15 minimum wage floors, according to the National Employment Law Project (NELP), and four in ten workers live in states on the pathway to a $15 minimum wage.

At the national level, the Raise the Wage Act, approved by the House, would boost the federal minimum from $7.25 an hour to $15 phased-in by 2025; but it is blocked in the Senate.  In the 2022 midterm elections, this impasse could well impact the outcomes of competitive Senate and House races in battleground states.

In California, an initiative to hike California’s minimum wage to $18 an hour (phased-in by 2026) funded by tech entrepreneur Joe Sandberg appears to be a lock for the 2022 November ballot. California House races that Democrats must win could hinge on the state’s minimum wage.

So, why has the higher wages movement exploded in California? How might the fight for higher minimum wages impact the 2022 mid-terms? And what’s next for the movement?

Soaring inequality in the Golden State, rising costs of living, and a vast low-wage service sector are the story behind the higher wage movement. According to the California Budget and Policy Project, average real income for the top one percent skyrocketed by 134 percent while the incomes of the bottom forty percent fell by 16 percent between 1987 and 2017.

The bottom has dropped out for California workers because of stagnating wages.  In 2018 the median wage of $21.79, adjusted for inflation, was just 1 percent higher than 1979.  For the bottom ten percent, hourly wages rose by a meager four percent. The California Future of Work Commission reported in 2021 that one in three California workers earned less than $15 per hour. The majority of those are essential workers who cannot work from home and experience high COVID workplace infections.

The United Way of California estimate for 2019 is that one-third of California households were working poor, i.e., with at least one household member working but income insufficient for basic food, shelter, health care, transportation, childcare, and taxes.

Rents have far outpaced wages for decades, squeezing California workers. According to the California Housing Partnership, between 2000 and 2019, annual median rents increased by a whopping 35 percent while renter incomes grew by just 6 percent. As a result, California renters face increased overcrowding, eviction, displacement, and homelessness.

Origins of the Movement and the Fight for $15

One hundred and twenty cities and counties soon followed suit nationwide and in California. In these campaigns, coalitions of labor, faith, immigrant rights, and environmental organizations educated the public about what it costs to make ends meet and what local governments can do to address inequality. In 2003, San Francisco went a step farther, becoming the first California city to approve a citywide minimum wage higher than the state’s –which, unlike Living Wage laws, covered virtually all local workers.

Such efforts multiplied after the 2008 financial collapse and plunge into the Great Recession. Occupy Wall Street exploded in 2011-12, with more than 600 tent encampments in cities across the nation, including 143 in California.  While Occupy protests ended, the movement energized new campaigns to halt foreclosures and evictions, promote financial regulation, end student debt – and raise the wage floor.

In 2012, fast-food workers in New York – among the lowest paid in the service sector – held a one-day strike demanding $15 and a union, which seemed like a pipe dream at the time.  Yet, fast-food strikes supported by SEIU, the nation’s second-largest union, spread to 190 cities by 2014, while low-wage workers organized sit-ins and civil disobedience at McDonald’s and Wal-Mart stores in coastal California metros.

The Fight for $15 movement was born and campaigns were launched across the country to win citywide minimum wages. In 2012, there were just four U.S. municipalities with such laws, but Fight for $15 coalitions in SeaTac and Seattle, Washington, won the nation’s first $15 citywide minimum wage laws in 2013 and 2014. Over the next two years, San Francisco, Los Angeles, San Jose, and San Diego followed suit.  Since that time, fifty-one cities and counties nationwide have approved $15 minimum wage laws.

In 2015-16, California higher-wage advocates collected enough signatures to qualify a state $15 minimum wage ballot initiative. Polling indicated that the voters would overwhelmingly approve such a proposition, so the California legislature jumped in to enact the first $15 state minimum wage in 2016, followed by New York, Massachusetts, Connecticut, New Jersey, Illinois, and Maryland over the next three years.

In November 2020 the dominos continued to fall when Florida voters approved a $15 minimum, and in 2021 when the Rhode Island, Virginia, and Delaware legislatures did the same. In addition, since 2016 nine states have adopted lesser minimum wage increases ranging from $11 an hour to $14.75.

Notably, most of these state and local minimum wage increases include an annual automatic cost of living adjustment to prevent the erosion of the purchasing power of the minimum over time.

Business Gets on Board

The writing is on the wall for American companies to get on board the moving train of higher minimum wages, and the Covid-19 crisis has driven the message home.  A growing number of large employers have raised entry-level pay in response to tightening labor markets, a record number of workers quitting low-wage jobs, and state and local minimum wage increases.

Bank of America leads all employers by setting its minimum pay at $21 an hour, committing to reach $25 by 2025. Amazon recently announced a boost of entry-level wages to $18 an hour. Costco and Ikea have hiked minimum pay to $16. Retailers like Target, Whole Foods, Best Buy, CVS, and Walgreens; insurers including Allstate, Aetna, and Nationwide; banks such as Wells Fargo and JP Morgan Chase; and tech companies including Google and Facebook have established a $15 entry-level wage.

A milestone in the Fight for $15 was McDonald’s 2019 announcement that it would no longer oppose minimum wage increases at the federal, state, or local level.  Now, a 2021 Executive Order by President Biden has boosted starting pay to $15 an hour as of January 30, 2022, for hundreds of thousands of workers employed by federal contractors who receive new, renewed, or extended contracts.

Voters are solidly in favor of higher minimum wages.  In 2021 the Pew Research Center reported 62 percent support for the federal Raise the Wage Act ($15 phased-in by 2025). Public support spans both Red and Blue states, as demonstrated by Florida voters approving their ballot measure by a stunning 60 percent margin, despite Trump’s narrow win in that state.  But the political elites are not on board, as shown by the way Florida’s Republican governor, both senators, and party leadership all denounced the popular $15 minimum ballot initiative and by eight Democrats joining the Republicans in the U.S. Senate to defeat the federal bill.

With California now poised to raise its minimum wage to $18, it could ignite another round of increases among the states – especially given the record profits of large employers during the Covid-19 pandemic, spiraling inflation, and growing worker intransigence. The Congressional Research Service reports that, since 1996, minimum wage initiatives have passed in 26 states, and none has failed.

The 2022 Mid-terms and the Minimum Wage

The minimum wage looms over the 2022 mid-terms. A 2019 poll by Peter Hart Associates found that two-thirds of voters in fifty-seven battleground Congressional districts won in 2018 by Democrats favored raising the federal minimum to $15. The poll also indicated that voters are likely to support candidates who favor the Raise the Wage Act by a large margin.

California has as many as nine House seats up for grabs, particularly in the Central Valley, Los Angeles, and Orange counties. Redistricting has placed five incumbent Republicans in vulnerable positions, and three of these races experts rate as toss-ups. California Republicans are skating on thin ice if they oppose an $18 an hour state minimum wage.

Many swing states with competitive Senate races, such as Pennsylvania, North Carolina, Georgia, Wisconsin, and New Hampshire, still set their minimum wage at the rock bottom federal level of $7.25 an hour. Recent Progressive Change Institute polling shows that 53 percent of the voters in three of these states support a $15 minimum wage phased-in by 2025. A candidate’s support for the Raise the Wage Act could influence voters’ choices in these battleground states.

In Arizona and Nevada, where 2022 Senate races are a toss-up, voters have previously approved state minimum wage increases by lopsided majorities. In Nevada, voters will consider another state ballot initiative to raise the minimum wage to $12 an hour by 2024.

A candidate’s position on the minimum wage could make a difference in 2022. This ought to favor Democrats since the Party has championed the higher-wage movement while Republicans have blocked raising the federal minimum wage for over a decade. The minimum wage is especially important for the Democrats base constituency. The Economic Policy Institute reports that the federal Raise the Wage Act would increase pay for one in three black workers and one in four Latino workers. Under the bill, nearly 60 percent of workers receiving a pay raise are women.

The Next Phase of the Movement

The United Way of California calculates that a California living wage is no less than $21 per hour for two parents working full-time to support two children. The cost of living is much higher on the coast compared to the Central Valley, but $20 an hour is an aspirational goal for the entire state, if not the nation.

Allynn Umel, campaign director for the Fight for $15 and a Union, recently told CNBC, “Now $15 is widely understood to be the bare minimum workers anywhere need to get by. $15 has always been the floor, not the ceiling, for wages—and working people will continue to demand lawmakers and employers increase pay to keep up with the rising cost of living.”

The higher-wage movement will undoubtedly adopt “Fight for $20 and a Union” as the new name. However, ultimately, low-wage workers must unionize to win and maintain a living wage, comprehensive benefits, and protections for health and safety.

Unionized workers in low-wage industries are already pushing for a wage floor higher than $18. In 2018, Oakland voters overwhelmingly approved a Hotel Employee Minimum Wage ballot initiative proposed by UNITE HERE Local 2850 and the East Bay Alliance for A Sustainable Economy, which mandated that large hotels pay their workers $20 an hour (or $15 if health benefits are provided).

In 2021, 20,000 California janitors represented by SEIU USWW ratified a new contract that will lift wages to $20 an hour for most and enhance their medical and retirement benefits. Union home care or IHSS (in-home support services) workers in San Francisco won a wage increase to $18.75 an hour last year. SEIU 2015, the union representing home care and nursing home workers statewide, has launched a campaign to make $20 per hour the starting wage for all long-term care workers.

California was the first state to implement a $15 minimum wage, and the Golden State provided a model for the grassroots campaign that got it done. Once again, California is at the forefront of raising the wage floor, fast becoming the Fight for $20 and a Union. The difference is that now the minimum wage issue could affect the outcome of the 2022 mid-terms in California and across the nation.

Martin J. Bennett is Instructor Emeritus of History at Santa Rosa Junior College and a Research and Policy Associate for UNITE HERE Local 2850.