US politics have become hyperpolarized along partisan lines. But they don’t have to be. Millions of Americans worry more about paying the rent or medical bills than what’s on cable news. They can be won over by a working-class economic agenda. 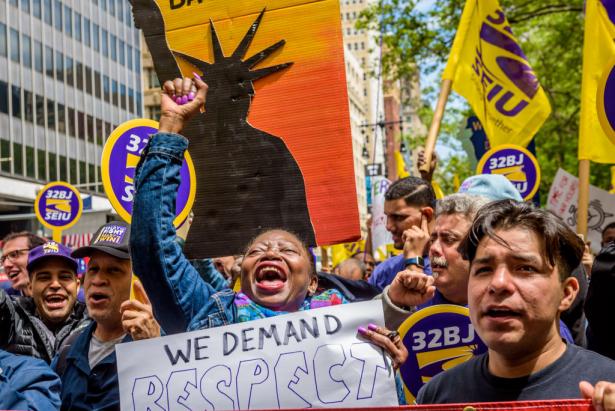 We can build a multiracial working-class coalition organized around the issues important to working people., Erik McGregor / LightRocket // Jacobin

Are working-class voters in America polarized? It sure looks like it. In Virginia, a mother threatens to bring loaded weapons to her child’s school to stop a mask mandate, and the new governor institutes a tip line to report any school official teaching something “divisive.” Texas also has a tip line, with cash rewards to anyone reporting an abortion or intent to get an abortion. Local election officials fear for their lives. Armed white supremacist militias are the biggest domestic terrorism threat facing the country, according to the US Department of Justice.

A Carnegie Endowment for International Peace study points to the corrosive effects of polarization on politicians and institutions, and finds these divides extend far beyond the corridors of power, as “polarization at the mass level is pushing Americans across the country to divide themselves into distinct and mutually exclusive political camps.”

But we’re not there yet. There are millions of working-class Americans who worry more about paying the rent or getting a medical bill than what’s on cable news. Many of them hold no strong allegiance to a political camp and are potentially persuadable voters. A recent Pew study identifies 15 percent of the public as “stressed sideliners” and another 12 percent as “ambivalent right.”

Political scientists Yanna Krupnikov and John Barry Ryan have an even more expansive view of who is available for persuasion. The common view of harsh polarization “obscures another, enormous gulf: the gap between those who follow politics closely and those who don’t,” they argue. They found that 80 to 85 percent of Americans don’t follow politics or do so only casually. And they have different priorities. For example, wages are a high priority for those who don’t follow politics, “but for hard partisans, the issue barely registers.”

The researchers’ findings fit with the on-the-ground experience of Working America, the organization I helped found in 2003. Working America’s organizers go door-to-door in working-class communities year-round, engaging people in discussion and action around the economic issues they care about the most and signing them up as members. Our 3.5 million members — working people who are, on the whole, not part of any other progressive organization — get information on issues and resources by email, text, personalized letters, calls, and additional canvass visits.

Our team has identified 33 million of the most persuadable voters in battleground states. We believe 6 to 7 million of them can be moved to vote for Working America–endorsed candidates in 2022. These voters are largely non-college educated and what we call “non-cable” — people who don’t watch much cable TV news and are low-information voters.

Priorities that cut across race emerged in Working America’s most recent Front Porch Focus Group report. Canvassers had in-depth phone discussions with more than 1,300 targeted voters in nine battleground states between mid-November and mid-January. There was strong agreement about priorities across race and sex.

Jobs and the economy was the most important issue, but there’s a gap between what the media covers — the stock market, job growth numbers — and people’s perceptions on the ground. Most saw job growth as nonexistent or in the low-paying retail and service sectors. Greg, thirty-one, in Philadelphia, said, “I have heard that a lot of places are hiring right now but that people aren’t taking the jobs because they barely pay anything.”

Housing emerged as an urgent issue across demographics and geographies, affecting renters and prospective homebuyers among most voters. Conservatives were more concerned about energy prices.

Working America’s experience in last fall’s election for mayor in Lima, Ohio, captured the mix of despair and hope, and the potential for working-class solidarity. Once a small manufacturing center, Lima has lost a third of its population since 1970. About one in five people Working America contacted there said they were most concerned about jobs and the economy, but a web of other issues were on their minds as well, including housing, crime, and health care.

A mix of black and white voters weighed in. Ronald worried about young people. “The jobs have all gone unless you want to work at Walmart or somewhere like that. And there’s no future in a place like that.” But people were also looking for solutions.

"There are millions of working-class Americans who worry more about paying the rent or getting a medical bill than what’s on cable news."

David sees public solutions where the private sector is failing them: “I would like more money going into the parks, more fitness things to do around the area.”

Phillip thinks the city of Lima is making a mistake by tearing down old residential houses, but sees alternatives. “Give homeowners the option to buy the property and rebuild.”

There is common ground among working-class voters on issues like good pay, health care, and housing. This commonality creates an opportunity to undermine the Republican advantage on the issue of the economy. As issues morph, Working America will adjust its message and targeting through continuous research.

Take Robert. Education is his most important issue, as he has two little kids. He works at Walmart. He distrusts politicians but signed Working America’s petition to expand Medicaid. Working America will get back to Robert throughout the year on social media and will be back in his neighborhood later in the year. Closer to the election, they’ll let him know where the candidates stand on his issues. Robert leaned conservative but will take our information into account when he votes, which Working America knows because of the continuous testing and analytics that track the impact of its program on voters like Robert.

Millions of people like Robert will hear from Working America this year. These targeted voters in battleground states will get door knocks from canvassers, personalized letters on issues from volunteers, information and resources by text, and news from local sources that attempt to cut through the vitriol on Facebook.

“We talk to people who are paying half their income on rent, or who have never had a paid sick day or vacation day,” says Working America’s executive director Matt Morrison.

They’re fed up with politics. And it’s their communities, with lower education levels, higher income inequality, and fewer opportunities, where the right wing keeps growing, or people just don’t vote. We connect with them. We reach out to hear what’s on their minds, become a trusted messenger, provide opportunities to take action, and in some cases begin to materially change their lives. You need the basics in your life to have the resilience to engage in politics.

It starts with a personal conversation at a front door about the cost of prescriptions, unaffordable rent, or low wages. That leads to a discussion about the outsized influence of big corporations and the importance of acting together to combat it. Two out of three people join as members.

That initial contact opens the door to ongoing communication focused on issues and resources, not “politics.” Texts, email messages and personalized letters about immediate issues, like how to access unemployment insurance benefits and the Child Tax Credit, or just connecting on health care or jobs, builds a relationship.

Some of these communications with members evolve into issue-focused campaigns that can make a real difference in people’s lives and turn members into organizers. Throughout the period of greatest pandemic-induced job loss, Working America, with the National Employment Law Project, provided information on how to access unemployment insurance to underserved black workers, engaging ten thousand people who then contacted their friends and family. The information provided by these local community activists resulted in more than thirty thousand successful applicants and $170 million in the pockets of unemployed black workers.

Christal was one of those activists. She lost her job during the pandemic. She has a group of friends who also lost jobs, and they gathered every week in a parking lot to chat and drink coffee. Christal shared Working America’s information on unemployment insurance with her friends, who then all successfully applied. The group continued to meet, and she shared election information she received from Working America with her coffee circle, too.

Working America plans to have 100,000 local community organizers this year and 250,000 before the 2024 election, building a grassroots infrastructure for change among unlikely activists.

Message, mass outreach, and community networks pull working people to our side. But the most profound effect comes from the basic fact of membership, an impact that lasts for a decade or more. Our analysis of election night survey data from 2016 and 2020 shows that Working America members moved 12.2 percentage points in Democratic vote share. In comparison, the general public moved 1.2 percentage points.

Randomized control tests show that Working America members are three to five times more likely than their nonmember counterparts to take an action, change their minds about their priorities, and be persuaded to vote for our endorsed candidates. Working America’s member program is also extremely cost-effective, as reflected by what it typically costs to persuade someone to change their vote. In 2020, campaigns and super PACs spent an average of $750 to $1,000 per vote gain. Working America’s cost per vote gain among members was $50.

Working America doesn’t substitute for the power of that experience. But the connection we provide shows some of the same effects.

At a time when union favorability among working people is at an historic high but membership continues to decline because of employer hostility and a legal system that benefits corporations, Working America is building a massive membership that is union-adjacent, reinforcing labor’s goals. And the science Working America practices tells us what we already know in our hearts as organizers: good organizing based on membership breaks through. We can build a multiracial working-class coalition with millions of members, win elections, and strengthen democracy in these perilous times.

[Karen Nussbaum was a cofounder of the women’s labor organization 9to5 and the founding director of Working America.]

Thanks to the author for sending this to portside.

Our new issue is out this month. Subscribe at a special rate and don’t miss it.