Martha Menchca’s new book examines events that have shaped the lives of so many in the Lone Star State. 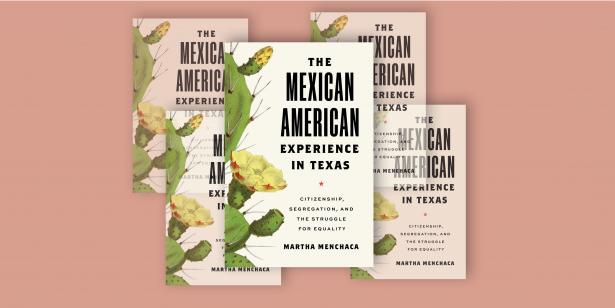 At once, the plight of Mexican Americans in Texas is both a figment of distant history and a bloodstain on the current day. It’s just like the old adage: To understand the present, one must look to the past. That’s what inimitable Latina author Martha Menchaca has done in her latest book, The Mexican American Experience in Texas. The title was released last month by The University of Texas Press and serves as a thorough retelling of critical events that have shaped the cultural identity in Texas all the way back to the state’s earliest days. It shouldn’t surprise you that her research is replete with details of discrimination and disinformation—nor should it surprise you that Republican elected officials are still at it today.

In perhaps the most harrowing section of her book, Menchaca writes of several extrajudicial killings carried out by the Texas Rangers. (The Rangers, who today represent the state’s elite criminal investigation unit, have a long but little-known history of brutality against folks who they deem to have the wrong skin color.) One of the most troubling incidents reported by Menchaca involves suspected Mexican bandidos accused of rustling cattle from King Ranch. The Rangers rounded them up, shot them, “and hung their bodies from the public square in Brownsville.” They were not given the benefit of a trial, she writes. The passage is excerpted below. —Christopher Collins

THE TEXAS RANGERS AND THE U.S.-MEXICO BORDER

In 1875, during Reconstruction, Governor Richard Coke commissioned several companies of Texas Rangers to patrol the U.S.-Mexico border, and an era of abusive policing began. Their main mandate was to protect the border from Mexican bandits who entered Texas to steal cattle, but their policing practices became seriously corrupt. Wealthy Anglo-American settlers who had purchased Spanish and Mexican land grants along the border used the state’s police force to advance their economic interests against the Mexican population. Major John B. Jones commanded the Frontier Battalion, consisting of six companies of seventy-five men each. They were responsible for patrolling El Paso County. Captain  L. H. McNelly was placed in command of the Special Force of Texas Rangers, a smaller unit of forty men responsible for maintaining law and order in South Texas between the Nueces River and the Rio Grande. The Rangers indiscriminately attacked people, instilling terror in Mexican communities. Mexicans were shot or arrested merely because they were suspected of being bandidos or because they were accused of protecting cattle rustlers.

In South Texas, many Rangers were on the payrolls of Anglo-American cattle barons and helped them steal cattle from Mexican ranchers. Richard King, an American entrepreneur, had become the wealthiest rancher in the region. It was rumored that King exerted significant influence on the Rangers, paying them to arrest Mexicans who questioned his authority. The Rangers had a camp on the King Ranch. Mexicans were often arrested for allegedly stealing cattle from the ranch. Several incidents were so grave that the attacks on Mexican communities came to the attention of  Congress and investigations were made. On June 12, 1875,  the Rangers captured thirteen Mexican cowboys near Brownsville and accused them of cattle rustling. Rather than giving them the opportunity to defend themselves in court, the Rangers shot them and then hung their corpses in the public square in Brownsville. The Rangers were later accused by Mexican Americans and news reporters of using public hangings to instill fear in Mexican American communities. Newspapers across the United States reported that after the federal government investigated the affair, the Mexican cowboys were found not to be rustlers, but cowboys returning from a stock-buying trip in North Texas. When the cattle were inspected for stolen brands, most were found to be unbranded, proving that the cowboys were not thieves.

McNelly’s Special Forces were also known for committing brutalities across the border, and in Mexico they were considered outlaws with licenses to kill. In 1875, McNelly and his Rangers crossed the border without federal authorization and attacked the Mexican village of Cachuttas. On their return to the United States, they alleged that Juan Flores Salinas, the mayor of Camargo was at fault for not allowing them to pursue the bandits that had stolen cattle from the King Ranch. The conflict began after the Rangers set up camp at Cachuttas and Flores ordered them to leave. When they refused, he returned with one hundred men, and the conflict exploded. McNelly’s Rangers reported that they fought back, and after overpowering the villagers, eighty  Mexicans were dead, including  Flores. The  Rangers then retrieved the stolen cattle and pursued the alleged thieves hiding in nearby villages. The Rangers collected four hundred cattle and returned to the King Ranch. The Mexican government complained, and the U.S. Department of War investigated the incident, finding that of the cattle taken from Mexico, 250 were unbranded and that only a few had a King Ranch brand.

McNelly was admonished for his actions by the Secretary of War, but the governor of Texas did not suspend his commission. The incident caused bad feelings between the Mexican government and the State of Texas. It also alerted the U.S. government to maintain oversight of the Texas Rangers when it came to international affairs, and the War Department was put in charge of investigating all matters dealing with Texas Rangers crossing the border. After the Cachuttas affair, the U.S. government could not ignore major international incidents. Therefore, when Major John B. Jones, commander of the Frontier Battalion in El Paso County, became embroiled in the most explosive crime committed against a Mexican American community in Texas, the federal government was forced to intervene and to maintain federal surveillance over unjust state policing. President Rutherford B. Hayes began an investigation of what became known as the Salt War Riots, after federal troops reported that Texas Rangers were committing atrocities against the civilians of El Paso County and the Mexican communities across the border.

Martha Menchaca is a professor of anthropology at the University of Texas at Austin. She is the author of Recovering History, Constructing Race: The Indian, Black, and White Roots of Mexican Americans and Naturalizing Mexican Immigrants: A Texas History.

SUPPORT INDEPENDENT JOURNALISM
Do you think free access to journalism like this is important? The Texas Observer is known for its fiercely independent, uncompromising work— which we are pleased to provide to the public at no charge in this space. We rely on the generosity of our readers who believe that this work is important. You can chip in for as little as 99 cents a month. If you support this mission, we need your help. Learn more.