Russia’s Ukraine Invasion Will Cost the West, but It Will Cost Russia More

Political leaders don’t consult economists before they start wars. If they did, we’d have world peace. Just one day in, oil futures hovered near $100 a barrel - higher than they’d been since 2014, and it’s predicted they’ll rise to $125 or $150. 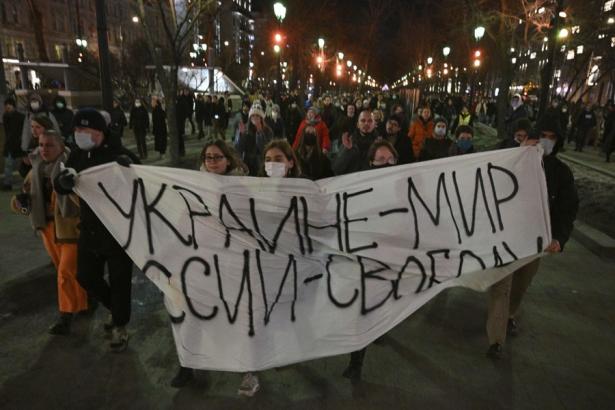 Demonstrators march with a banner that reads "Ukraine—Peace, Russia—Freedom," in Moscow on February 24, 2022, after Russia's attack on Ukraine., Dmitry Serebryakov / AP // The Atlantic

War is so very expensive that it’s a wonder any deficit-conscious Republican ever allows it to happen. The Iraq War cost more than $3 trillion. The Afghanistan War cost $2.3 trillion. The Ukraine War won’t cost us that much because we’re unlikely to commit troops. But just one day in, oil futures hovered near $100 a barrel, which was higher than they’d been since 2014, and it’s predicted they’ll rise to $125 or $150.

Oil prices already had been rising over the past year, after tanking during the early months of the pandemic, and it’s often argued that Russia is at its saber-rattling worst whenever Brent crude gets too pricey. Oil prices were rising in late 2013 before Russia invaded Crimea in March 2014, and they were going absolutely bonkers before Russia invaded Georgia in August 2008. Some people extend this hypothesis all the way back to the Soviet invasion of Afghanistan in 1979, which coincided with the energy crisis.

The trouble with this theory is that Russia’s overall economy was declining before all these interventions. The country had a much worse Great Recession than the European Union, and a shakier recovery through the mid-teens. So maybe it’s a declining economy that bestirs the Russian bear? Except the Russian economy is doing pretty well right now, with 4.7 percent gross domestic product growth in 2021. I conclude that Russia doesn’t start wars because it’s feeling flush or feeling broke. Neither does the United States. Wars start because somebody feels like starting one. Economists don’t get a vote. They just come around afterward to tally the cost.

The cost this time will be worsening inflation. Biden acknowledged that Tuesday when he said that although his administration “is using every tool at our disposal to protect American businesses and consumers from rising prices at the pump … defending freedom will have costs.”

The first round of U.S. sanctions targets two financial institutions in Russia, including VEB, the state development corporation. In addition, both the U.S. and the European Union will block Russian access to Western capital markets. Russia may retaliate by limiting oil and gas exports to the EU. Or possibly the EU will put its own limits on Russian energy imports if Russian forces press further into Ukraine.

Either alternative would pinch the EU hard, because Russia is the EU’s principal energy supplier, providing one-quarter of its oil imports and one-third of its natural gas. The U.S. is much less vulnerable, but it imports more oil from Russia than from anyplace else outside North America, and anyway, oil prices are set globally. Russia is the world’s second-biggest oil producer after Saudi Arabia, and the biggest producer of natural gas.

A complication that Russian President Vladimir Putin has decided for now to ignore is that Russia doesn’t want oil to get pricier either. Russia’s oil minister, Nikolai Shulginov, said Tuesday that the optimal price of oil would be $55 to $70 per barrel, which is where it was a year ago. Russia already has 8 percent inflation, and a further increase in the price of oil will push up prices in other sectors, he said, sounding vaguely American. Also, Shulginov said, “high prices result in a slower growth in demand.”

Russian prosperity would be better insulated from Putin’s belligerence if Russia had a more consequential economy, but it doesn’t. President Barack Obama put it brutally in 2016: “Their economy doesn’t produce anything anybody wants to buy except oil and gas and arms. They don’t innovate.”

The New York Times’ Patricia Cohen and Jack Ewing put it even more brutally on February 21:

Russia is a minor player in the global economy. Italy, with half the people and fewer natural resources, has an economy that is twice the size. Poland exports more goods to the European Union than Russia.

“Russia is incredibly unimportant in the global economy except for oil and gas,” said Jason Furman, a Harvard economist who was an adviser to President Barack Obama. “It’s basically a big gas station.”

All this makes it really dumb for Putin to pick a fight with the EU and the U.S. It will hurt our economy, but it will hurt Russia’s economy more. And that’s before you figure in the prohibitive cost of governing a foreign population, a cost that finally persuaded the Western colonial powers after World War II to chuck the old imperial model. Empire is really expensive. The Russians aren’t invading Ukraine because it will help them prosper. They’re invading Ukraine despite the certainty that it won’t. Putin should fire his generals and use the money to hire more economists.

[Timothy Noah is a New Republic staff writer and author of The Great Divergence: America’s Growing Inequality Crisis and What We Can Do About It. Timothy Noah @TimothyNoah1]