"We can't let the fossil fuel industry scare us into a domestic drilling free-for-all that is neither economically warranted nor environmentally sound," said the U.S. congressman. 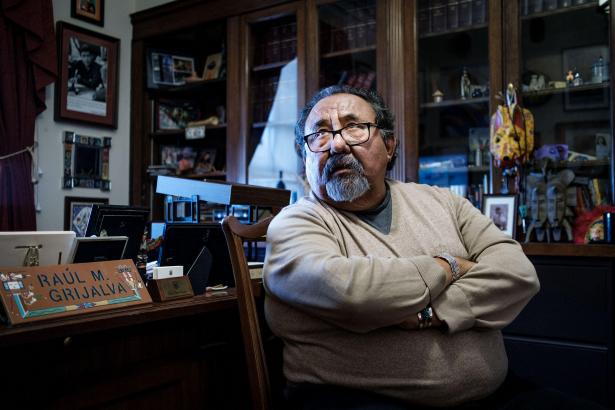 U.S. House Natural Resources Committee Chair Raúl Grijalva on Friday warned that days into Russia's war on Ukraine, the U.S. fossil fuel industry has launched a misinformation campaign aimed at promoting even more oil and gas drilling as the key to ending the conflict and aiding Ukrainians.

In an opinion piece at The Guardian, the Arizona Democrat pointed to a list of demands the American Petroleum Institute—the largest lobbying firm for the U.S. oil and gas sector—released just before Russian forces invaded Ukraine last week, including "Release permits for energy development on public lands" and "Accelerate energy infrastructure permitting."

"I feel duty-bound to set the record straight," wrote the congressman. "We can't let the fossil fuel industry scare us into a domestic drilling free-for-all that is neither economically warranted nor environmentally sound."

"Much to my deep disappointment and protest, this administration actually approved more U.S. drilling permits per month in 2021 than President Trump did during each of the first three years of his presidency," the congressman said.

The fossil fuel industry has already laid claim to at least 26 million acres of public land, he wrote, and has more than 9,000 approved drilling permits that companies have yet to use, as well as federal offshore oil and gas leases covering more than eight million acres.

"With the facts laid bare, we see the fossil fuel industry's crocodile tears for what they are—the same old demands for cheaper leases and looser regulations they've been peddling for decades," wrote Grijalva. "These pleas have nothing to do with countering Putin's invasion or stabilizing gas prices, and everything to do with making oil and gas development as easy and profitable as possible."

As Fossil Free Media director Jamie Henn wrote at Common Dreams earlier this week, API, the fossil fuel giants it represents, and right-wing lawmakers who count the industry among their major donors believe "they can fool the public into thinking that more U.S. fossil fuel production will help Ukraine and harm Putin."

"API likes to pretend that more infrastructure will allow the U.S. to somehow flood the global market with enough oil and gas that Putin won’t sell any of his, but that's not how markets work," Henn wrote. "As long as the world is still reliant on fossil fuels, money will be flowing into the Putin regime."

The fossil fuel lobby has been joined by Republicans and anti-climate Democrats in Congress in its push to capitalize on the crisis in Ukraine, which has so far displaced more than a million people and killed more than 2,000 people, according to the Ukrainian emergency service.

Sen. Joe Manchin (D-W.Va.), who has opposed his own party's proposals to shift toward renewable energy as part of the Build Back Better Act, this week called on the U.S. to "ramp up domestic energy production," while Republicans claimed in a letter to Biden on Wednesday that the halting of the Keystone pipeline project left the U.S. and its allies "vulnerable to the malicious maneuverings of Vladimir Putin," urging him to approve more pipeline and offshore drilling permits and loosen environmental regulations.

Naomi Klein, author of "The Shock Doctrine," suggested on Twitter that the right's push for more drilling amid Ukraine's deadly crisis is an example of "disaster capitalism."

"But if that's true, why hasn't record oil extraction from both federal and non-federal lands over the last decade done anything to consistently lower, or at least stabilize, prices at the pump?" asked Grijalva.

Rather than ramp up oil and gas drilling, the congressman said, the U.S. must choose "a path forward that simultaneously cuts the lifeline to fossil fuel despots like Putin, stabilizes energy prices here at home, and creates a safer, more sustainable planet."

"We must wean ourselves off our oil and gas dependence and make transformational investments in cleaner renewable energy technologies, like those in the Bipartisan Infrastructure Law, the Build Back Better Act, and the Competes Act, and we must do it now," he wrote.

We've had enough. The 1% own and operate the corporate media. They are doing everything they can to defend the status quo, squash dissent and protect the wealthy and the powerful. The Common Dreams media model is different. We cover the news that matters to the 99%. Our mission? To inform. To inspire. To ignite change for the common good. How? Nonprofit. Independent. Reader-supported. Free to read. Free to republish. Free to share. With no advertising. No paywalls. No selling of your data. Thousands of small donations fund our newsroom and allow us to continue publishing. Can you chip in? We can't do it without you. Thank you.