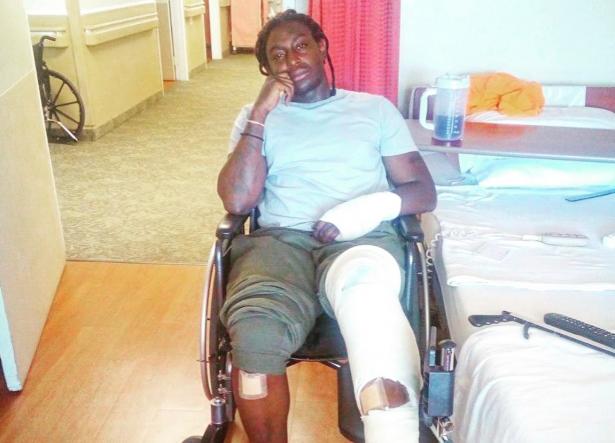 Dacari Spiers suffered a broken wrist and leg, which required surgery to repair, and was forced to use a wheelchair during his recovery after a San Francisco police officer beat him with a baton in October 2019., (Photo courtesy Spiers' attorneys)

Way back in 1968, off-duty police officer Michael O’Brien shot and killed a Black man named George Baskett. O’Brien and another off-duty cop, after a day of drinking and boating, got into an argument with one of the Black residents of Brush Place, a dead-end alley near the Hall of Injustice, mostly inhabited by Black folks. O’Brien drew his gun, and the confrontation escalated from there. Several witnesses at the trial testified that O’Brien had yelled “I want to kill a n***** so goddamn bad I can taste it,” among other racial epithets. And, indeed, O’Brien shot and killed Baskett, and of course claimed self-defense. District Attorney John Jay Ferdon subsequently brought O’Brien to trial on a charge of manslaughter.

In the most recent case, police officer Stangel responded to a 911 report that a Black man was beating his girlfriend at Fisherman’s Wharf. When Stangel and fellow officer Cuahtemoc Martinez arrived, there was no assault or any other unlawful conduct going on, but they chose to wrestle Spiers to the ground anyway. In the process, Stangel struck Spiers with a metal baton seven or eight times, breaking his wrist and leg. Spiers was not charged with any crime. District Attorney Chesa Boudin, however, brought felony charges against Stangel for his conduct. In the meantime, Spiers settled a lawsuit against the San Francisco Police Department for a $700,000 payout.

I have previously written about the O’Brien trial at some length, in part because my aunt served on the jury. You can read the 48 Hills article here, or a slightly more detailed version on my website here.

Both Stangel and O’Brien were acquitted at their trials. That is amazing enough. But what is even more amazing is that after the O’Brien trial it took over 50 years for a San Francisco District Attorney to have the guts to charge any police officer with the use of excessive force. Does anybody really believe that no officer committed any such offense between 1968 and 2019?

How did these two cops beat their raps?

First, in both trials the defense successfully put the victims of the police violence on trial.

In the O’Brien trial, his attorney, the flamboyant J. W. “Jake” Ehrlich, variously called the mostly Black witnesses from Brush Place, the scene of the crime, “liar,” “punk,” “knucklehead, “little fool,” “perjurer,” and “killer.” He called Brush Place “a hellhole with some 200 hyenas in there.” He accused one of the witnesses of being paid to testify. “Somebody gave him something. Whoever did it isn’t entitled to be a living human being.” And that is just a sampling of the tactics Ehrlich employed. The play was clear: how could a white man in such a situation not pull out his gun and start shooting?

In the Stangel trial, his attorney, Nicole Pifari, argued that Spiers was a liar and prone to violence. Spiers, according to Pifari, “has little to no control over his emotions.” Pifari argued that Spiers had been beating his girlfriend before the cops arrived, although there is no evidence for this, and his girlfriend denied it. Pifari repeatedly brought up prior conflicts Spiers has had with law enforcement – not too unusual for a Black man – despite the fact that neither Stangel or Martinez had any knowledge of these encounters when they confronted Spiers. “Let’s just cut to the chase,” Pifari said, “You cannot believe anything they told you,” referring both to Spiers and to expert witness Roger Clark, a former lieutenant with the Los Angeles County Sheriff’s Department. Clark, she said, is nothing but a “hack.” By contrast, she said, Stangel was being prosecuted “for being a human being.” Presumably, then, Spiers is not really a human being.

But perhaps even more significant than what Pifari had to say was the prejudicial publicity that preceded the trial, when Police Chief Bill Scott declared that the SF Police Department was pulling out of an agreement that gave the District Attorney’s Office the lead in investigating accusations of the use of excessive force by police. Scott specifically targeted the district attorney’s conduct in the Stangel trial, claiming that the DA had withheld evidence that would tend to show Spier’s guilt and Stangel’s innocence. This widely publicized story branded Boudin and Spiers as the villains.

No matter that the judge in the case found that Chief Scott’s charge was groundless. The die was cast for the trial to be held amid a media circus targeting the District Attorney for allegedly gaming the system. Former San Francisco Police Commissioner John Hamasaki noted that Scott’s decision came on the eve of the Stangel trial, and publicly accused Scott of intentionally trying to sway the jurors. In fact, it was Chief Scott who was gaming the system.

Second, in both trials the defense claimed that the charges against the officer were politically motivated.
In the O’Brien case, attorney Ehrlich claimed, according to a March 29, 1969 SF Chronicle article, that “O’Brien was the victim of a political power play, which… was engineered by [then] Mayor Joseph Alioto to collect ‘a few lousy dirty votes’ from minority groups.” At the trial, Ehrlich charged that O’Brien was a “sacrificial goat” because an attorney representing the Baskett family “and some Black brethren” demanded it, and called the District Attorney’s Office “prejudiced and biased.” This is the atmosphere in which the O’Brien trial was conducted.

In the Stangel case, the trial became part and parcel of the campaign to recall District Attorney Boudin, an effort led and financed by reactionary and racist political forces that charge Boudin with not being tough enough on crime, and of targeting police rather than criminals. The recall campaign is part of a nationwide effort to curb prosecutors who look at crime as a reflection of an ailing economic and political system, and at police as the defenders of that system. In this context, everybody – including the jury – knew full well that Boudin was on trial as much as was Stangel.

Third, and probably most importantly, neither the O’Brien nor the Stangel juries included any Black men or women.

Black jurors might very well have seen O’Brien and Stangel’s actions as unprovoked assaults against innocent victims by a police force primed to make sure that Black people know their place. The lack of Black jurors in trials against Black defendants has been a hot-button question for decades. In the O’Brien and Stangel trials, there were no Black defendants, but the fact remains that in truth it was the actions of Black men that were on trial.

Were O’Brien and Stangel provoked by Black men to do an unsavory task, or was it O’Brien and Stangel’s racism that led them to brutalize their Black victims? How can that question be put before a jury without Black men or women? How can it be that 50-plus years after the Civil Rights Movement we still convene such juries without Black folks? Do Black Jurors Matter, or don’t they?

What, then, do these two verdicts, decades apart from each other, tell us about the criminal justice system in the Land of the Free? They tell us that lawyers defending white police officers against charges of assaulting a Black man can still pull out the race card and play that before a jury that includes no Black people, all the while accusing the prosecutors of being “politically motivated.” They tell us that justice is still something that is doled out selectively for Black victims of police abuse.

The corporate propaganda machine is portraying the verdict in the Stangel trial as a defeat for District Attorney Chesa Boudin. The Stangel verdict is indeed a defeat for Boudin, and comes at a bad time for him. But the biggest loser in the Stangel trial is not Boudin, just as the biggest loser in the O’Brien trial was not District Attorney Ferdon. The biggest loser is and was the Black community, who have once again witnessed a graphic demonstration of the systemic racism that props up Amerikkka the Beautiful. The biggest winners are the police forces that defend that system – and the 1percent whose system they are defending.