Why has no progress been made on an international financial registry that would help locate oligarch's assets? One simple reason: wealthy westerners don’t want one

March 16, 2022 Thomas Piketty The Guardian
Printer friendly
The Western Elite Is Preventing Us From Going After the Assets of Russia’s Hyper-Rich Published March 16, 2022 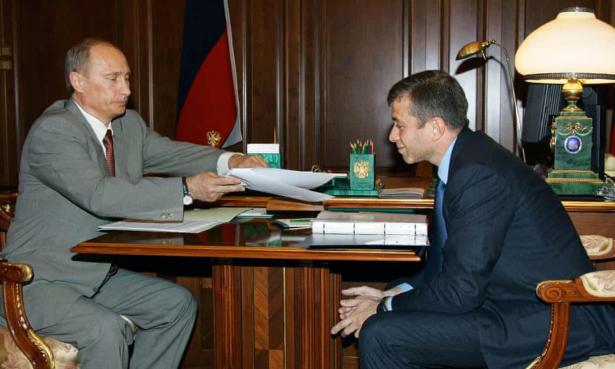 Vladimir Putin with Roman Abramovich in the Kremlin in 2005. ‘Western wealthy people fear that such [financial'] transparency will ultimately harm them.’ ,Photograph: Reuters

The Ukrainian crisis has revived an old debate: how to effectively sanction a state like Russia? Let’s say it straight away: it is time to imagine a new type of sanction focused on the oligarchs who have prospered thanks to the regime in question. This will require the establishment of an international financial register, which will not be to the liking of western fortunes, whose interests are much more closely linked to those of the Russian and Chinese oligarchs than is sometimes claimed. However, it is at this price that western countries will succeed in winning the political and moral battle against the autocracies and in demonstrating to the world that the resounding speeches on democracy and justice are not simply empty words.

Let us first recall that the freezing of assets held by Putin and his relatives is already part of the arsenal of sanctions that have been tried for several years. The problem is that the freezes applied so far remain largely symbolic. They only concern a few dozen people, and can be circumvented by using nominees, especially as nothing has been done to systematically measure and cross-reference the real estate and financial portfolios held by each of them.

The US and its allies are now considering fully disconnecting Russia from the Swift financial network, which would deprive Russian banks of access to the international system for financial transactions and money transfers. The problem is that such a measure is very poorly targeted. Just as with conventional trade sanctions, which after the 2014 crisis were largely instrumentalised by the government to strengthen its grip, the risk would be to impose considerable costs on ordinary Russian and western businesses, with adverse consequences for the employees concerned. The measure would also affect a large number of bi-nationals and mixed couples, while sparing the wealthiest (who would use alternative financial intermediaries).

To bring the Russian state to heel, we must focus sanctions on the thin social layer of multimillionaires upon which the regime relies: a group much larger than a few dozen people, but much narrower than the Russian population in general. To give you an idea, one could target the people who hold over €10m ($11m) in real estate and financial assets, or about 20,000 people, according to the latest available data. This represents 0.02% of the Russian adult population (currently 110 million). Setting the threshold at €5m would hit 50,000 people; lowering it to €2m would hit 100,000 (0.1% of the population).

It is likely that a considerable effect could already be achieved by targeting those with more than €10m. These 20,000 people are those who have benefited most from the Putin regime since he came to power in 1999, and all the evidence suggests that a considerable proportion of their real-estate and financial assets are located in western countries (between half and three-quarters). It would therefore be relatively easy for western states to levy a heavy tax on these assets, say at a rate of 10% or 20% to start with, freezing the rest as a precaution. Threatened with ruin and a ban on visiting the west, let’s bet that this group would be able to make itself heard by the Kremlin.

The same mechanism could have been used in the wake of the Chinese political crackdown in Hong Kong, and could be applied in the future for the 200,000 or so Chinese citizens holding more than €10m. Although their assets are less internationalised than those of the Russians, they too would be hit hard. It could destabilise the regime.

To implement this type of measure, it would be sufficient for western countries to finally set up an international financial registry (also known as a “global financial registry” or GFR) that would keep track of who owns what in the various countries. As the World Inequality Report 2018 has already shown, such a project is technically possible and requires the public authorities to take control of the private central depositories (Clearstream, Euroclear, Depository Trust Corporation, etc) that currently register securities and their owners. This public register would also be an essential step in the fight against illicit flows, drug money and international corruption.

So why has no progress still not been made in this direction? For one simple reason: western wealthy people fear that such transparency will ultimately harm them. This is one of the main contradictions of our time. The confrontation between “democracies” and “autocracies” is overplayed, forgetting that western countries share with Russia and China an unbridled, hyper-capitalist ideology, and a legal, fiscal and political system that is increasingly favourable to large fortunes.

In Europe and the United States, everything is done to distinguish useful and deserving western “entrepreneurs” from harmful and parasitic Russian, Chinese, Indian or African “oligarchs”. But the truth is that they have much in common. In particular, the immense prosperity of multimillionaires on all continents since the 1980s and 90s can be explained to a large extent by the same factors, and in particular by the favours and privileges granted to them. The free movement of capital without fiscal and collective compensation is an unsustainable system in the long term. It is by questioning this common doxa that we will be able to effectively sanction autocracies and promote another development model.