Starbucks is firing worker activists as it seeks to blunt the momentum of the union drive sweeping the company. Jacobin spoke to Laila Dalton, who was fired just weeks after the NLRB issued a complaint against Starbucks for retaliating against her. 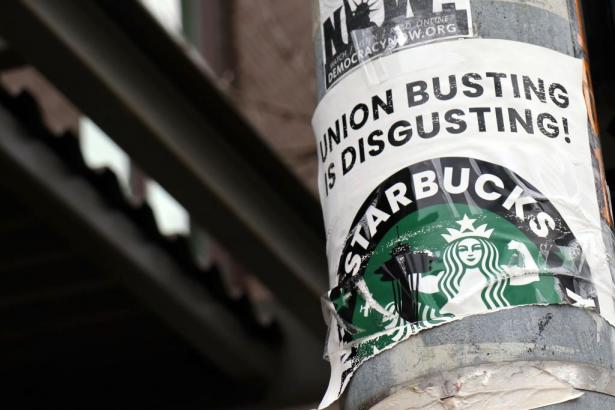 A pro-union poster is seen on a lamp pole outside Starbucks' Broadway and Denny location in Seattle. ,(Toby Scott / SOPA Images / LightRocket via Getty Images)

Starbucks is waging a war on its workers. The coffee chain has brought back founder Howard Schultz to lead the effort to defeat a union drive that is still spreading across the country, and that workers allege is flagrantly violating federal law as it seeks to slow their momentum. Currently, 176 Starbucks locations have filed for National Labor Relations Board (NLRB) elections since the first union campaign at a corporate-owned store in the United States went public in Buffalo, New York last year.

Starbucks is favoring a particular method: firing union leaders. Workers at several stores say they have been terminated in retaliation for legally protected union activities. Early allegations came in Memphis, Tennessee in February, when Starbucks fired seven workers after they announced their union drive. The company has said that the workers were fired on the pretext of workplace conduct violations, and while Starbucks Workers United has filed unfair labor practice (ULP) charges against the company alleging retaliation, the understaffed NLRB has yet to make a judgment, and the workers remain without their jobs.

In recent days, with Schultz back at the helm — and, bizarrely, attempting to assuage worker unrest by announcing that the company is “going to be in the NFT business” — the firings appear to have accelerated. Several union leaders in Buffalo have been fired or forced out. Three workers have been fired in Overland Park, Kansas, where the remaining workers are now on strike. And on Monday, Laila Dalton, the nineteen-year-old Starbucks barista in Phoenix, Arizona whose prior claims of retaliation were substantiated by the NLRB mere weeks ago, lost her job.

As in the case of the other recent terminations, Starbucks says that Dalton was fired for violating company policies, telling the Independent that she was “written up numerous times for behavior that is not reflective of the company’s mission and values.” The company has pointed specifically to her recording interactions with management “without their consent, which is against the law in Arizona.” This despite Arizona being a one-party consent state. [According to the Reporters Committee for Freedom of the Press, recording a conversation without a person’s knowledge is permitted in Arizona as long as there is consent from “at least one party to the conversation.”]

But Dalton and her coworkers say her termination was retaliation. In the days leading up to her firing, Dalton had been voicing her fears about such an outcome on social media and had mentioned increasing harassment and surveillance at her store during a conversation with Jacobin just weeks ago. It is rare for a company to violate the law in such a high-profile case — evidence that Starbucks is desperate to blunt workers’ momentum.

In a conversation with Jacobin’s Alex N. Press, Dalton explains how she was fired, what has happened since, and what she expects going forward. After all, her store is now voting on unionization, with ballots due back to the NLRB by April 19. The transcript has been edited for length and clarity.

What happened on Monday?

About an hour after Howard Schultz had begun his town hall, I was fired. My shift started at 12:30 PM, and at 1:20 PM, I saw the district manager and another district manager. Now, on Saturday, I’d gotten harassed by two district managers as well. That day, they asked me if I have ever recorded [a phone call or video] without anyone’s consent — even though Arizona is a one-party consent state. At that time, they’d told me I was under another investigation. Almost every time we meet, there’s a new investigation, and never any follow-up on the prior ones.

I started recording, as I always do, and the first thing she did was give me a final written warning. That warning was about an alleged violation of a COVID procedure in January, on a day when I wasn’t working but had come into the store to pick up a friend. Weirdly, this final written warning said that it was created on March 18, but it wasn’t given to me until April 4.

Right after they gave me that final written warning, they gave me the next sheet of paper, which was a notice of separation, and it was for totally different reasons. It was because I recorded without anyone’s permission. The write-up says, “Your conduct not only violates Starbucks policy. It also raises concerns under Arizona state law and interferes with the operations of our store. This conduct would constitute grounds for separation in and of itself, even without considering your history of corrective action. This serves as Leila Dalton’s notice of separation of employment.”

Meanwhile, I’ve been so public in the media. I’ve told them that I’m always recording, not that I’d need their permission under Arizona law. They clearly don’t know the law and it was clearly retaliation: it was the day before our ballots went out and it was an hour after Howard got in.

You’ve filed another ULP charge with the NLRB over your termination, and it’s incredibly bold for a company to terminate a person who was so recently the face of a prior sustained complaint. Plus, some of the things Starbucks was investigating you for are just totally strange — I saw the video you recorded in which an ethics and compliance officer seems to ask if you’re too quick to call coworkers racist, even though you’re the only black employee at your store. What do you expect to happen next?

I’m ready to be reinstated, even though I know that might take two to three months. But Starbucks’s reputation will be totally ruined. My union rep has always said that the more public you are, the safer you are, and I have always been very public. But even though I was in those videos from More Perfect Union, they kept harassing me and writing me up. It’s not smart. I did not expect it and I would have thought that if they were to fire me, it would have been after the election. Starbucks doing it the day before our ballots come out might end up with them having to forfeit the election if we lose because it’s clear intimidation. It affects workers when they fire the most outspoken person.

My coworkers were in shock, and really upset and outraged. No one saw this coming, not even me, and it’s just making them want to unionize more. Of course, Starbucks is going to go with intimidation tactics, but today, we came out to our rally and had a great turnout. We raised so much attention that, according to my coworker, the two managers at the store were hiding by the bathroom, making calls.

Then, my district manager showed up along with someone who we don’t know but who looks like they’re from corporate. So, we were bringing a lot of attention. Now they’re starting to pull workers one by one, asking them about the election. I’m not sure of the questions yet, but I’ve been told that my district manager is pulling everyone aside to try to talk to them about the election and about why I was separated.

You said this retaliation might backfire, with workers wanting a union now more than ever, and that reminds me of the Amazon union campaign in Staten Island. Amazon called the cops on Chris Smalls, the president of the Amazon Labor Union, and organizers say that backfired, leading more workers to vote for the union. What do you think about that victory?

I was in shock when I heard the news. Because I’m going through it, I can feel for the Amazon people. I’m realizing how corrupt these big companies are. Those workers have been going through it, and they got their victory. Seeing how Amazon spent more than $4 million trying to union-bust last year, I can only imagine how much Starbucks is spending on us and the lengths they’re going to in an effort to stop this union.

But everything they’re doing is winning more people to the union. I think with people in my generation going through this and posting about it on social media, people are realizing that their best friends are getting treated horribly. A lot of my friends never knew Starbucks was like this. They just expect the whole food industry to be a struggle. Once I tell them how much Starbucks can give us, they realize that we shouldn’t be allowing them to treat us like this.

They can afford to pay us more, to give us more benefits, and to treat us better, but they don’t because they’re greedy. That shows that they don’t care about us, that they see us as just bodies and a source of investment. So, this definitely encourages people to want to have a voice and figure out ways to have a voice, which is by unionizing.

This is the start of a new era. Definitely. I see unions being a big thing for our generation, and I’m so excited that people want to stand up for themselves and are ready to be treated more fairly.