By Helping Self-Organized Workers, Labor Can Save Itself

Unions must create a massive, dedicated project to assist workers like those at the Staten Island Amazon warehouse. 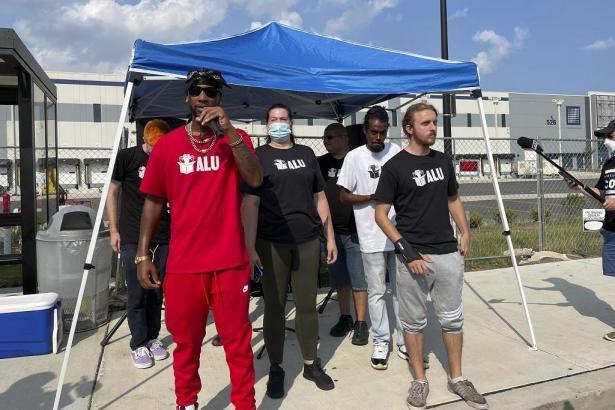 On April 1st, a virtually unknown independent union in Staten Island became the first group of workers to unionize an Amazon warehouse in the United States, handily winning an NLRB election while beating back a typically oppressive “union avoidance” campaign in which the company spent more than $4.3 million—approximately $538 per worker.

The Amazon union victory in New York is just the latest example of an astonishing amount of self-organizing that workers are engaged in throughout the country, across numerous occupational sectors. At Starbucks, Apple Stores, and Google, as well as at breweries, media outlets, health care agencies, museums, universities, and schools, workers are embarking on major collective actions on their own, without organized labor at the helm or even in the picture.

As a case in point, the Amazon organizers who were busy with signature-gathering and all other aspects of their yearlong unionizing campaign were joined by hardly anyone from organized labor; most of the labor movement had completely written off this campaign.

Of much greater concern, however, is the fact that labor’s leadership seems to have little recognition of the constructive role it should be playing to assist similar upcoming initiatives, and in the long term, to revive its own sagging fortunes.

Missing is a vision, much less a specific program, that moves beyond the calls for labor law reform and seizes on the extraordinary energies and creativity of so many of the self-organizing workers. In the Biden administration, the labor movement has one of the most supportive governments it has had in decades. Even with the best of intentions, however, it is clear that neither the administration nor labor’s congressional friends can deliver the Protecting the Right to Organize Act (the PRO Act) or any other game-changing legislative measures.

The AFL-CIO, or at least a serious “coalition of the willing,” should be single-mindedly looking to harness the energy and activism of these self-organizing workers and transform them into a new broader movement.

Meanwhile, as we are constantly reminded, organized labor in the U.S. is truly facing an existential crisis, as its density has been on a steady decline for the last five decades. At present, only 10.3 percent of U.S. workers are union members, and a mere 6.1 percent of private-sector workers are members.

And yet, for the first time in many years, the labor movement has a genuine opportunity to reverse its decline while providing invaluable assistance to this wave of organizing workers. What is needed is an all-hands-on-deck commitment—a top-priority Labor Self-Organizing Workers Support (Labor SOWS) Project.

The AFL-CIO, or at least a serious “coalition of the willing,” should be single-mindedly looking to harness the energy and activism of these self-organizing workers and transform them into a new broader movement—one that joins these angry but hopeful workers with (even if not necessarily within) today’s unions.

Ideally, such a program would be organized and coordinated by the nation’s central labor federation, with the full participation of all union leaders on the national and local levels. With its strategic leadership capacity questioned even by many of its own affiliates and with several of the nation’s largest unions still outside of the AFL-CIO, however, the job may more realistically fall to a “coalition of the willing”—those unions seeing a common need and purpose in this initiative.

In any event, whether the AFL-CIO takes the lead on Labor SOWS or whether instead it is directed by a coalition of activist unions, a central role will fall to the state and local labor movements. After all, the key to successfully assisting self-organizing workers, on a scale that will have lasting impact, will be for organized labor to lend its experience, expertise, and selective resources at the grassroots level across the country.

Without organized labor playing a deeply supportive institutional role, there can be little expectation that many of the self-organizing workers’ initiatives will bear fruit, at least in any lasting way. As exciting as these campaigns are, far too few of them are accompanied by the basic support mechanisms—legal, digital, communications, coalition-building—that are needed to withstand the ferocious opposition that most employers unleash at the mere whiff of union organizing in their workplace, and then in the follow-up campaign to achieve a first collective-bargaining agreement. Indeed, not to take anything away from the incredible organizing success at Amazon last week and the dozen or so Starbucks stores that have recently voted in their own unions, in some ways their even greater challenges are just beginning, as their employers will be called upon to come to the negotiating table in good faith. That’s something that many employers either opt not to do, or to do so slowly and haltingly that the process grinds on for so many months or years that the workers just give up—as their employers expect.

A Labor SOWS project, however, would not only help the self-organizing workers succeed in their own unionization initiatives, but in the longer term it would place organized labor back on a revival path. The commitment would not preclude individual unions from continuing to undertake their own campaigns in their own sectors; however, it would require the labor movement as a whole to prioritize an all-in initiative to support the millions of self-organizing, would-be union members, recognizing that ultimately, at least, it would be rescuing itself.

A Labor SOWS project would not only help the self-organizing workers succeed in their own unionization initiatives, but in the longer term place organized labor back on a revival path.

First, the AFL-CIO or the Coalition of Participating Unions (CPU) should constitute a steering committee of union presidents who would formulate policy and commit the national resources aimed at providing the necessary support of self-organizing workers. Non-AFL-CIO-affiliated unions, including SEIU, the Teamsters, NEA, and others, should be equal partners in this program. All of organized labor needs to be part of this unique opportunity to help broaden the labor movement and restore overall union growth, and it needs to do so in a collective, collaborative manner, as some unions did in the formative years of the CIO.

Second, they should create staff-level committees of organizing, field, communications, legal, bargaining, and research experts to provide or assist local labor movements in developing tool kits and other necessary support materials for the self-organizing workers to draw upon. They should ensure that national groups of experts and activists—union lawyers, labor educators, university-affiliated labor faculty, faith leaders, student organizations, civil and immigrant rights groups, and so on—are available to the self-organizing workers.

Third, local labor movements—the state, area, and local AFL-CIO bodies—should be trained, resourced, and otherwise equipped to provide organizing assistance, media support, legal advice, community partner coalition-building, employer research, grievance training, bargaining support, and grassroots organizing training to add to what the self-organizing workers are bringing to their own campaigns. These state and local organizations should prioritize the Labor SOWS program, making sure that the requisite tool kits and other forms of assistance to self-organizing workers are available and readily accessible.

Fourth, given how much resistance employers typically devote to first contract negotiations, the AFL-CIO or CPU should help develop, by sector, a concise first collective-bargaining agreement as a model or template—one focused on key priorities common to workers in a particular sector but also leaving ample space for workers to decide for themselves how their local demands should be shaped. Detailed and more difficult issues can wait for second or third contracts.

Fifth, the AFL-CIO or CPU should see the Labor SOWS Project as an opportunity to broaden the labor movement. Local labor movements should prioritize initiatives led by young workers, workers of color, immigrant workers, women, and others traditionally underrepresented in organized labor in the campaigns that they assist.

Sixth, and crucially, the AFL-CIO or CPU should establish a funding mechanism dedicated to this program. As labor scholars and practitioners have long observed, unions in the United States own union halls and other real property that, given their many decades of ownership, often are mortgage-free. Modest leveraging of what is estimated to be many billions of dollars of such assets could yield very significant sums that could be dedicated to this all-too-unique opportunity.

The Labor SOWS project must start from an acknowledgment that the labor movement would be helping these self-organizing workers form their own unions and bargain their own first contracts. It must see its own role in this project as supplementing, not supplanting, what these new organizers are bringing to the struggle. In the short term, organized labor’s commitment would not be generated by the more typical self-interest that unions bring to their own campaigns. Many of the successful self-organized worker campaigns would not result in existing unions’ increasing their own membership rolls for the time being.

In time, many of these new independent unions will likely conclude that they will not be able to thrive without affiliating with an existing, established union. Even if these unions don’t affiliate with existing unions, or form nationwide new unions, that would still be a boon to those existing unions. Any realistic possibility of their own growth is dependent on a labor movement that does not continue to lose power and influence, much less fade from existence entirely—prospects that the labor movement must acknowledge are currently very real.

There is ample precedent for organized labor to play this kind of role in times of significant worker self-organizing. In the late 19th century, the AFL helped workers form their own independent workplace unions. In the 1930s, it amended its constitution to institutionalize these self-organized unions, Directly Affiliated Local Unions, which were then chartered by the AFL. Hundreds of these directly affiliated locals joined the labor movement in this fashion. Gradually, over subsequent years and decades, virtually all of them voluntarily merged directly into the national unions in their sectors.

The question before the labor movement today cannot be whether it will seize this moment to assist the self-organizing workers, but rather how it can provide that assistance on an adequate scale. If it wishes to stave off its continuing decline into an otherwise inevitable irrelevance, the labor movement must act—now.