The Herschel Walker Senate Campaign Is an Insult to Black People

Georgia Republicans have embraced Walker because they think any old Black person will do when it comes to their cynical strategy for defeating Raphael Warnock. 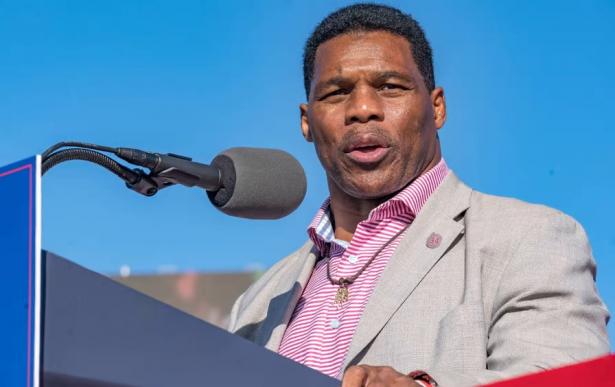 Former Heisman Trophy winner and candidate for US Senate Herschel Walker (R-Ga.) speaks to supporters of former US president Donald Trump during a rally at the Banks County Dragway on March 26, 2022 in Commerce, Georgia., Megan Varner/Getty Images

Herschel Walker, the football star turned Georgia Senate candidate, is an animated caricature of a Black person drawn by white conservatives. Walker is what they think of us, and they think we’re big, ignorant, and easily manipulated. They think we’re shady or criminal. They think we’re tools to be used. The Walker campaign exists as a political minstrel show: a splashy rendition of what white Republicans think Black people look and sound like.

There is no doubt that Walker, currently leading in the Republican primary for Senate in Georgia, has been promoted by conservative forces because he is Black. Georgia Republicans aren’t in the habit of nominating Black people for the US Senate. The state’s Grand Old Party didn’t even nominate a Black person for the Senate during Reconstruction—when Republicans were progressives and Confederates were barred from government. Not a single Black person was elected to the Senate in Georgia from either party, ever, until Reverend Raphael Warnock ran as a Democrat—and won—in 2020. It is in direct response to Warnock and the emerging power of the Black vote in that state that Republicans dredged up Walker.

Nor is Georgia in the habit of electing football players who starred at the University of Georgia. I’ve heard many white folks argue that Walker is not being set against Warnock because of his blackness but because of his sportsball skills. But you’ll note that Georgia has not elected any of their other football greats to the Senate. It’s not like the Republicans are running Fran Tarkenton—a white University of Georgia great who went onto a Hall of Fame football career and (wait for it) gave a speech at the 2016 Republican National Convention endorsing Donald Trump. The “it’s the football, not the racism” argument fails its first contact with reality.

Georgia Republicans want Walker because he’s Black and Warnock is Black, and they think they can defeat Warnock in November if they can shave just a little of the Black vote from his base.

To be clear, I don’t begrudge Republicans their cynical political calculus. I’m offended at their racist belief that any old Black person is sufficient for their race-based strategy to work. It is easy to contrast Walker with other Black Republican candidates for Senate. Take, for instance, South Carolina’s Tim Scott (R–Sunken Place). I find Scott to be a mediocrity, and a coward. He’s a grinning stuffed suit who is more interested in pleasing his donors than serving his constituents. But that makes Scott no different than 60 to 70 other US senators. I, more or less, support the right of Black people to be as banal and craven as white folks have been for centuries while enjoying electoral success. That’s equality too, after a fashion: the right to be useless and unimpressive yet powerful while Black.

But Walker can’t match even Tim Scott’s mediocre level of political acumen. He’d fumble a coffee order from Black conservatives Paris Denard and J.C. Watts. Omarosa freaking Manigault would make him literally cry—once he went home and Googled the words she used to insult him.

Instead, Walker’s credentials include lying about being a class valedictorian, claiming to own businesses that do not exist, and having a restraining order taken out on him by his ex-wife, who has accused him of being physically and verbally abusive.

Every time somebody sticks a microphone in front of his mouth, Walker displays a level of ignorance that would embarrass most sixth graders. When asked by Trump toady Maria Bartiromo about energy policy this past Sunday, Walker said, “[O]ne of the first thing they did—and I think people need to know this—is they decided that they were going to give up our energy. By him going out giving up our energy, and now we’re not energy-independent anymore, which started the whole downfall.” He later added that there is “no food on the shelf,” as if the Publix is now being stocked by Marie Antoinette.

He’s also said that something called “dry mist” can kill Covid, and asked, incredulously, “Why are there still apes?,” pointing to their existence as proof that evolution via natural selection is not real. Walker is so bad that his team decided to keep him off the stage and skip the first Republican primary debate on April 9. Of course, Walker has been endorsed by Donald Trump. Indeed, Trump’s endorsement of an ignorant neophyte who cannot be trusted to debate in public and who is suspected of domestic abuse is the most conventional thing about the Walker candidacy.

The modern Republican Party has proven that being an ignorant know-nothing who exists as a pure grievance candidate with no policies or platform is not a deal breaker for Republican voters. Georgia Republicans have sent Marjorie Taylor Greene to Congress, after all. But what’s offensive about the Walker’s content-free campaign of nonsense is that Republicans think this will work on Black voters too. There are other Black Republicans. There are other Black Republicans running in the Republican primary for the Senate. Walker wasn’t even living in Georgia when this all started. But Republicans have rallied around him because they think Black Georgians are just addled enough to vote for touchdowns over basic public competence.

It won’t work, but that doesn’t mean Warnock will beat Walker. Georgia is a red state and the only reason two Democratic senators won there in a post-presidential 2020 runoff was because Trump stupidly depressed his own Republican base by calling the Georgia electoral system rigged (it wasn’t), white suburbanites were sick of Republican shenannigans, and there was overwhelming turnout from Black voters, including those newly registered by the heroic work of on-the-ground organizers like Stacey Abrams and LaTosha Brown. Change any of those factors even a little, and it’s unlikely that both Warnock and Jon Ossoff will make it over the top in 2020.

Fast-forward two years, and white suburbanites are back on their bullshit, Republicans have consolidated and deepened their voter suppression efforts, and the Black voters who ran through walls to give Democrats a majority in the Senate have been told, repeatedly, by Democrats, that their efforts don’t matter because of Joe Manchin and Kyrsten Sinema. Instead of stopping Republican voter suppression, Democrats have basically told Black voters to “vote harder.” Warnock could lose despite being an excellent and well-liked Senator these past two years, just as Doug Jones lost in Alabama to semiliterate coaching whistle Tommy Tuberville in 2020. Most white people in the South vote “R” like their entire white supremacist project depends on it, and it takes herculean efforts and near perfect conditions for everybody else to stop them.

If Walker is the nominee and somehow beats Warnock, it won’t be because Black people in Georgia were bedazzled by the Dallas Cowboys. Black people can spot the okey-doke. But Black turnout could be depressed—because of both voter suppression by Republicans and lack of political victories byDemocrats—and that would mean that the Black people who show up every election to vote Republican will be a higher proportion of the Black electorate. It will look like Walker “made gains” with Black voters, when all he would have done is get the same Black conservatives who would show up to vote for Walker, or David Perdue, or Stonewall Jackson in a midterm election.

It’s infuriating because the entire raison d’être of the Walker Senate campaign is the belief that Black people are easily manipulable children who will vote for other Black people like clapping seals, eager to perform tricks for the promise of treats. Anything other than abject and overwhelming rejection of Walker by all Black voters will be spun to fit that racist narrative, notwithstanding all of the other factors in play. If the Democratic Party blows Georgia, people will blame it on Black people voting for a fool instead of Republicans suppressing or outright discarding the votes of most Black people in Georgia.

Herschel Walker’s candidacy is a white insult to Black people. It doesn’t bother me that Walker is a clown show—it bothers me that white conservatives think Black voters are entertained.

Elie MystalTWITTER is The Nation’s justice correspondent and an Alfred Knobler Fellow at the Type Media Center. His first book is the New York Times best-seller Allow Me to Retort: A Black Guy's Guide to the Constitution. He can be followed @ElieNYC.