It’s not at all unusual to feed prisoners animal-grade food to save money. It happens all across the country every single day. 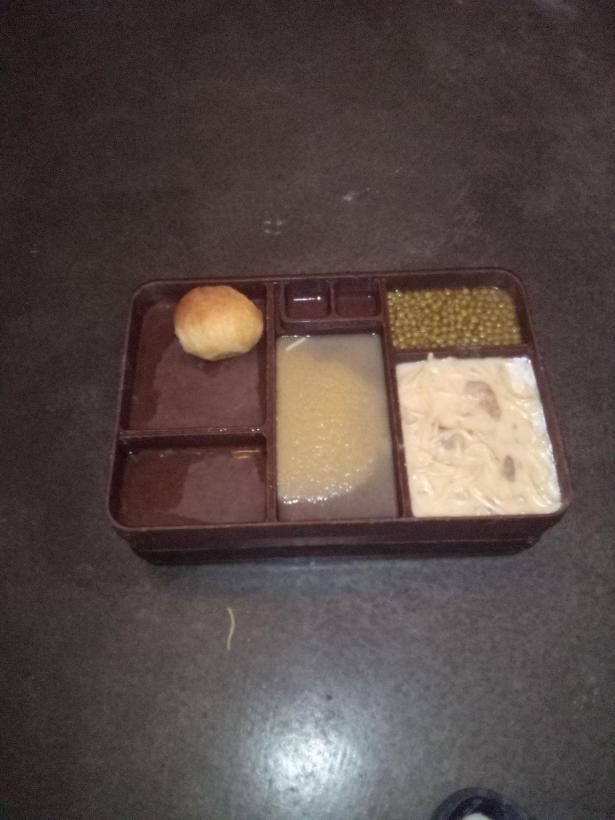 A photograph identified by a prisoner as dinner at North Fork Correctional Facility in Sayre, Oklahoma.,

We’ve all been reading about inflation over the past several months.  Food prices are up dramatically this year, and it’s putting the squeeze on a lot of American families.  Many people are cutting back, eating less meat, and trying to conserve.  But what happens when you’re in prison when food prices are spiking?

On my first day in prison in 2013, one of the other inmates said to me, “It’s Friday.  Fish day.”  I responded, “Oh.  Ok.  I like fish.”  “Not this fish,” he said.  “We call it sewer trout.  Stay away from it.”  When I got to the cafeteria, I saw boxes stacked up behind the serving line.  They were all clearly marked: “Alaskan Cod. Product of China.  Not for Human Consumption.  Feed Use Only.”  I never ate the fish.

There are two ways that prisons are able to save money.  They cut food costs and they cut medication costs.  In many prisons and jails at the state and local level, any budget surplus goes into the warden’s or sheriff’s pocket.

Check out this article, which documents how an Alabama sheriff legally took home as personal profit more than $750,000 that had been budgeted to feed prisoners and used it to pay cash for a beach house.  The prisoners ended up eating scraps not meant for human beings. 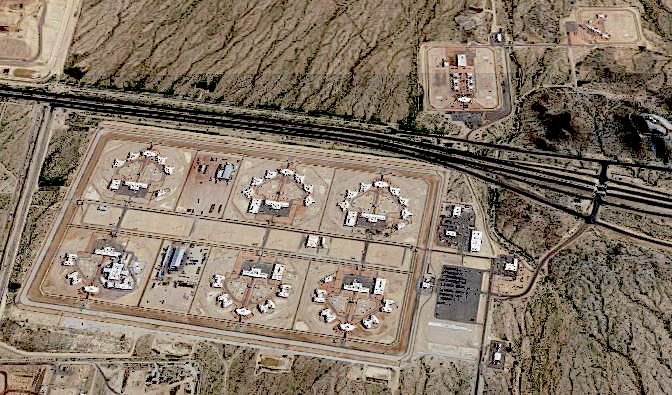 It’s not at all unusual to feed prisoners animal-grade food to save money.  It happens all across the country every single day.

In one Arizona women’s prison, current and former prisoners complained that they saw the “Not for Human Consumption” label on boxes of chicken legs and thighs and on lunch meat.

One former prisoner, who spent 12 years in the facility, said that she asked multiple times why animal-grade food was being served to prisoners, but she “never got a straight answer.”  Eventually, the prison stopped serving the chicken — the lunch meat is still being served — but not until enough prisoners complained about it.  The food service company, Trinity Services Group, also served prisoners maggot-infested food and “potatoes laced with crunchy dirt.”  Trinity was also accused of serving prisoners rotten meat that caused dozens of H. pylori infections.  Trinity’s response?  “That happened in the past.”

To give you an idea of how seriously, or not, “corrections professionals” take the allegations, one must only look at what they say to each other when they think nobody else can hear them.  The Phoenix New Times reported that a private Facebook group of Arizona prison guards mocked the animal-grade food and the prisoners who had to eat it.  One guard wrote, “That was true haha working in the kitchen I read it.”  Another said, “As a kitchen officer, I plead the fifth.”  Still another wrote, “This isn’t news lol.”

One Minnesota prisoner said that he tells new prisoners upon arrival, “Don’t eat no chili, no burritos, no types of sausage or the sausage gravy, no meatloaf, or no Salisbury steak.  It’s all bad.  It’s all made from that meat marked ‘Not for Human Consumption.’”

Aramark, the big food service company, says that it is dedicated to “culinary excellence” in prisons.  But after winning a contract to provide food in the Colorado prison system, their quest for culinary excellence didn’t stop them from serving prisoners “rotten food crawling with maggots or food that had been thrown in the trash, and (Aramark) gave inmates cake that had been partially eaten by rodents.”  The same thing happened at prisons Aramark supplied in Mississippi, in Oregon, Alabama and elsewhere. 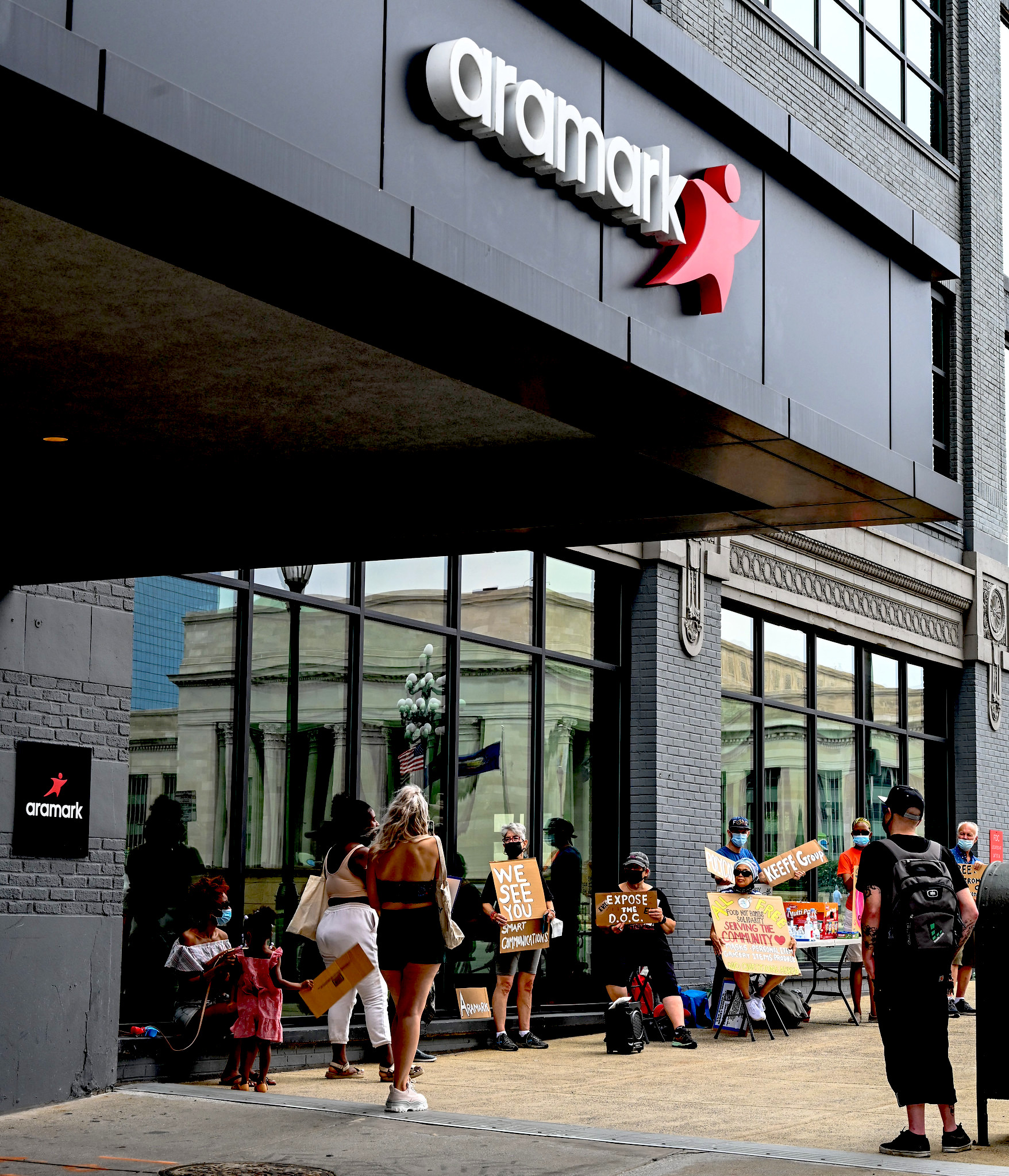 Activists in the Philadelphia area protesting against any further contracts with companies “that profit from mass incarceration,” Aug. 7, 2021. (Joe Piette, Flickr, CC BY-NC-SA 2.0)

If these details don’t make you angry, maybe this will:  According to a lawsuit filed against Oregon prison officials, prison administrators — in anticipation of state health inspections — directed inmates to clean up kitchens and remove “not for human consumption” food and to move green and moldy, spoiled food to the a mobile refrigerator and freezer trucks, only to return the spoiled food to the kitchen after the inspection was completed.  One of the prisoners filing the suit said she was ordered to serve “not for human consumption bait fish and spoiled meats, milk and produce” to fellow inmates.

The fix here is easy:  STOP DOING IT.  Where is the humanity?  I understand that when you run a prison, you want to balance a budget.  But the budget can’t be balanced while ignoring basic human rights.  I have no idea if it’s even illegal to serve people animal-grade food.  It wouldn’t even occur to me that such a thing would need to be legislated.  But if it is legal, it needs to be made illegal.  And people who do it should be prosecuted.  Maybe one of the reasons that we have some of the societal problems that we do is that we don’t treat the less fortunate among us with respect and dignity.

John Kiriakou is a former CIA counterterrorism officer and a former senior investigator with the Senate Foreign Relations Committee. John became the sixth whistleblower indicted by the Obama administration under the Espionage Act—a law designed to punish spies. He served 23 months in prison as a result of his attempts to oppose the Bush administration’s torture program.