The Supreme Court’s plan to strike down Roe vs. Wade is an attack on workers everywhere. The labor movement should treat it that way—by taking urgent action.

May 6, 2022 Kim Kelly In These Times
Printer friendly
Abortion Rights Are Workers’ Rights Published May 6, 2022 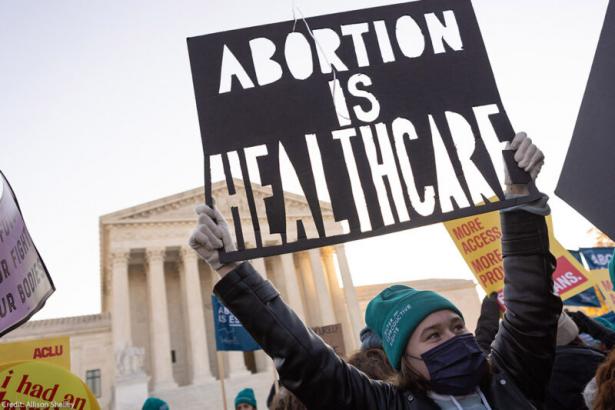 A t this very moment, protestors are gathering in cities across the country to decry the Supreme Court’s looming decision to overturn Roe v. Wade, the landmark 1973 case that established a person’s constitutional right to have an abortion.

Politicians, civil rights organizations, and reproductive rights groups have released statements railing against this latest rollback of our rights. Several unions and labor leaders have also stepped up by issuing impassioned responses to the decision, including National Nurses United Co-President Jean Ross, Association of Flight Attendants-CWA (AFA) President Sara Nelson, and AFL-CIO President Liz Shuler, who wrote that, ​“Access to health care without fear and intimidation is every person’s right. We must be able to control our own bodies — which has a direct impact on economic justice and the ability of working people to make a better life for themselves and their families.” This public dissent is welcome, but the labor movement needs to do more. Anything less than a full-throated defense of workers’ rights — including their right to make their own decisions about their health, body and sexual life — is unacceptable.

There is no time to mince words: Abortion rights are a labor issue, and this is a moment in which the labor movement needs to make clear that bodily autonomy and reproductive freedom are core issues that unions will fight tooth and nail to preserve. The right to control our bodies is part and parcel of our centuries-old battle to control our labor, and they cannot be separated from one another. It matters that so many workers are not only at risk of unwanted pregnancy themselves, but are also expected to engage in reproductive labor—the so-called ​“women’s work” that is so often undervalued and underpaid (or wholly unpaid). It matters that pregnant workers face discrimination as well as physical and medical hazards on the job, and that far too many don’t have access to quality healthcare or paid parental leave. It matters that workers who do not want to have a baby or cannot do so safely are about to have that choice stolen from them, and that forced birth is the only option on offer from the most powerful court in the land (as illegitimate as it is and always has been).

For those who can’t afford to travel to other states or overseas to get the care they need — the poor and the working class, the very people who the labor movement has pledged to liberate and uplift — this assault on abortion rights is a disaster, one that can lead only to desperation and death. Many have already been living through it, and now that the net has widened, abortions will still not stop — they will just get more dangerous and less accessible, and more lives will be destroyed as a result. Low-income women workers of color will be hit the hardest. ​“Our patients of color already face deep systemic barriers to accessing health care, and now would bear the most harmful impacts of this ban, including potential deadly consequences of forced birth,” Ross noted in her statement.

The United States is already a brutal place to be pregnant, and a merciless one in which to raise a child — it’s an even worse place to be a pregnant worker. The minimum wage is far too low, rent is far too high, and whatever remnants of a social safety net that working people were able to secure in recent decades have since frayed to tatters. Parental and infant mortality rates are deplorable, and are especially high for Black and Indigenous birth parents. We are living through a public health crisis, a housing crisis, a climate crisis, an economic inequality crisis and a political crisis. Bringing a child into this world should be a choice, not an order. Workers who are forced to surrender their bodies via judicial mandate and deliver unwanted babies are not being protected or respected, at work or as people. They are not free.

This is a moment in which organized labor needs to step up — even in the face of conservative voices within the movement who may be cheering on the fall of Roe. Statements are nice, but we need action. There are many conservative union members, and union leaders who’d rather not rock the boat on what they see as thorny political issues. But, again, abortion is a bread-and-butter workers’ rights issue. Personal or religious objections to a safe, standard medical procedure should not be allowed to dictate the terms of another human being’s existence. Abortion should be available on demand and without apology — anything less is anti-worker, and anti-life.

Unions still have power in this country, political and otherwise, and now is the moment to wield it. This attack on reproductive freedom is part of an ongoing class war, and there are more of us than there are of the people trying to rip our rights away. We’re the ones who make this country run. Our labor creates their profits, and our bodies are under attack. It’s time to fight back.