Northern Ireland has changed – and unionism has been left behind. But if the party can’t dominate, it won’t participate 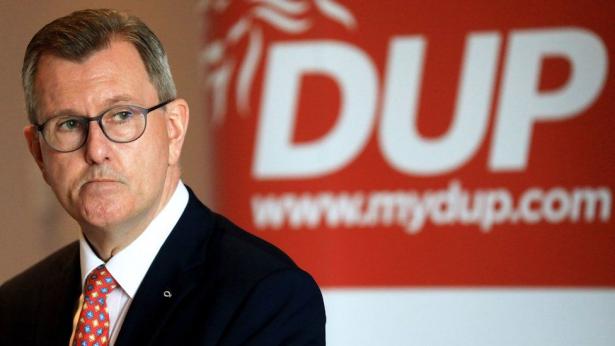 If these are the unionist stereotypes, DUP leader Jeffrey Donaldson seems determined to conform to every one.

A week after a historic election that saw Sinn Féin outpoll the DUP and win the right to nominate Michelle O'Neill as first minister of Northern Ireland, and a surge of support for the Alliance Party, the DUP's reaction has been to shut the devolved administration down.

Having refused to nominate a deputy first minister, thus ensuring that no executive decisions of any import can be made at Stormont, the party has now also refused to nominate a speaker, meaning that even the Assembly cannot function. Senior party figures have said there will have to be another election. It is now clear that if unionism cannot dominate, it will not participate.

Donaldson himself has abandoned the Assembly seat he won and scurried back to the comfortable exile of Westminster, where he is enabling Boris Johnson to use Northern Ireland to provoke a trade war with the EU.

Northern Ireland, already one of the poorest regions of the UK, is left without a government at a time when there is a cost of living crisis and a health crisis. This is not to mention the war in Ukraine, which ought to be the focus of EU and British political attention.

Related story: It’s not the break-up of Britain… yet

11 May 2022 | Adam Ramsay Election results show that the ground is shifting in Scotland, Wales and Northern Ireland.

But the future of the UK is still up for grabs

Ostensibly, Donaldson is taking a stand against the Brexit protocol, which unionists call the ‘border in the Irish Sea’. He claims Northern Irish shoppers now have to pay more than their counterparts in the rest of the UK – and that this is causing hardship and costing the local economy £2.5m per day. In reality, research shared by Stormont’s Department of Economy suggests the total grocery cost is currently 8% lower in Northern Ireland than the rest of the UK, while the NI economy is outperforming the UK's.

By keeping NI in the EU single market, the protocol gives it a distinct trading advantage, which has attracted considerable international interest. Local business leaders have been making the protocol work for them. It is, in fact, mitigating the worst impacts of Brexit. And remember, a majority in NI voted to remain in the EU.

Yet British businessman and former Brexit party MEP Ben Habib has claimed the protocol must be ditched because it posed “an existential threat to the union”. Oddly, two years ago he was insisting “Northern Ireland should embrace” the protocol because it offered an “opportunity to become a Tiger economy”.

The DUP is always falling for charlatans. It infamously showed the British public what its much-vaunted commitment to loyalty meant in 2019, when it shafted the then-prime minister, Theresa May in favour of Boris Johnson. The latter had promised a harder Brexit – which the DUP fondly assumed meant the return of a hard border across Ireland – but once he’d used the party to take power, he dropped it. The prime minister who negotiated the protocol now claims, without evidence, that it does not comply with the Good Friday Agreement (GFA).

May, meanwhile, became suddenly popular in Ireland this week when she used the House of Commons’ Queen Speech debate to urge the UK government not to breach the Brexit treaty, thereby breaking international law. She yielded to Donaldson, who said the most important thing was to protect the Good Friday Agreement. She then took the floor again to remind him that the Brexit deal she had put before Parliament did not include a border in the Irish Sea and also protected the GFA by not reinstating a hard border across Ireland. “Sadly,” she said, “the DUP and others across the House chose to reject that.”

The DUP's declared devotion to the Good Friday Agreement is new and transparently insincere. Donaldson left the Ulster Unionist Party in 2003 to join the anti-agreement DUP. In the run-up to the 5 May elections, he shared platforms at loyalist rallies with people who are explicitly opposed to the agreement. Like them, he asserts against all the evidence that it has served only to make unionists second-class citizens. The rallies attracted thuggish elements, which threatened a violent response if unionism did not get its way. The DUP has also been boycotting meetings of the North-South bodies that are intrinsic to the agreement.

All of this is incoherent and indicative of panic. The DUP is clearly floundering. Its vote has fallen by almost 7%, with some going to the sectarian hardliners it courted during an election campaign based on the old tactic (scaring protestants into voting unionist to save Ulster) and to Alliance, which includes many former unionists who reject the DUP's intransigence and fundamentalism.

Now, it finds itself threatened on both sides. Sinn Féin is on the rise, and, having surged to become the third-largest party, Alliance wants the definition of powersharing changed to give equal weight to those who are neither unionists nor nationalists. Under the Good Friday Agreement parties must designate as unionist, nationalist and other, but when ‘cross-community support’ is required for controversial decisions, only the unionist and nationalist blocs count.

The DUP has not even begun to imagine what equality means, but it fears it. “If you feed a crocodile it keeps coming back for more,” former party leader Arlene Foster infamously said of Sinn Féin demands in 2017. The nationalist anger provoked by her comments damaged the DUP at its next election. Crocodiles danced as Sinn Féin reaped votes. But the DUP is a party that considers paranoia sensible, makes a virtue of intransigence and does not learn from history. It also has a Trumpish willingness to brazen out obvious lies.

It yearns for a strong, manly unionism, united behind the Orange Order, just like in the days before 1972, when a Tory government prorogued Stormont and introduced direct rule.

Historically, British governments have ‘played the Orange card’ to protect unionism and disempower nationalism. Now, the DUP is left watching Johnson wave that card to threaten the EU, knowing he will play it only if it suits him. The Irish government has indicated that its relationship with the UK is at a breaking point. The EU will not abandon its commitment to the Good Friday Agreement. Nor will the US.

Northern Ireland has changed. It is a pluralist society now in which people expect to exercise their rights. The DUP can frustrate democracy for now, but the tide has already turned against it. People are talking about other options, like a united Ireland within the EU.

Susan McKay is a writer from Derry. From a Protestant background, she is now a humanist and feminist. Her journalism has won many awards and been widely anthologised. Her books include Sophia’s Story, a biography of a child abuse survivor, Without Fear, a history of the Dublin Rape Crisis Centre, and Bear in Mind These Dead, which deals with the aftermath of the Northern Ireland conflict for those bereaved.  In 2000 she published “Northern Protestants - An Unsettled People”, and she has just published a sequel to that book, “Northern Protestants- On Shifting Ground”  (Blackstaff, 2021).  The Irish Times said the book “seamlessly weaves together personal stories and political events with deep emotional intelligence.”  She is writing a book about borders, for which she received an Arts Council NI major individual award and a bursary from the Joseph Rowntree Charitable Trust.

At openDemocracy, we don't just expose what is happening, our journalism makes a real difference in the world. Your regular support means we can keep bringing you the stories others won’t. Donate today.