‘Nobody Cares About Us Here’: The Anger on Buffalo’s East Side

Residents said it was tough to separate the burst of extreme violence from prior decades of pain. One sign placed next to a memorial of white candles and flower bouquets seemed to encapsulate the emotion: “There are no words for this heartache.”

May 16, 2022 Troy Closson New York TImes
Printer friendly
‘Nobody Cares About Us Here’: The Anger on Buffalo’s East Side Published May 16, 2022 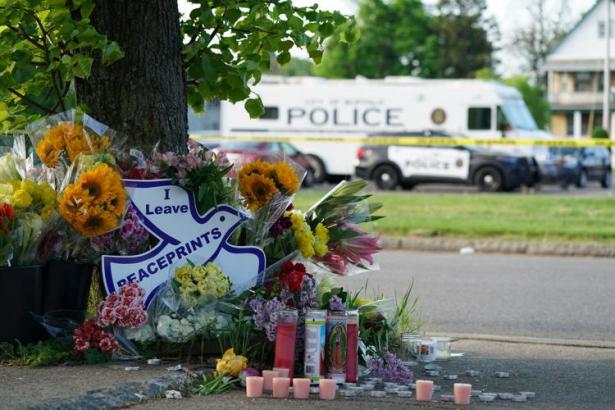 A makeshift memorial across the street from the Tops Friendly Market in Buffalo, ,Derek Gee, Buffalo News

BUFFALO — They rallied at a Black Lives Matter demonstration on the concrete steps of a local park, calling for politicians to direct more resources to Buffalo’s Black residents living on the largely impoverished East Side.

They tossed heavy bags of eggs, bread and water over their shoulders to lug for blocks, lamenting that their neighborhood was once again a food desert while the only full-service supermarket for miles was being swarmed by investigators.

And on the streets outside the Tops supermarket, which a gunman targeted on Saturday because he knew it served many Black people, they shouted through bullhorns, denouncing the racism that fueled a massacre — but that also shaped their experiences long before.

One day after a quiet, residential neighborhood in western New York became victim to the worst racist attack in the United States in recent years, scenes from the afternoon served as small windows into a collective anguish and anger that did not originate with the gunfire.

“We don’t want to be protected after the fact,” said Marlene Brown, 58, who is Black. For more than a decade she has lived just blocks away from the Tops supermarket, where 10 people were killed. “We want to be protected and treated like we matter,” she said, “without it taking a white supremacist shooting up our community.”

She added: “Time and time again they’ve shown nobody cares about us here. It’s a pattern.”

The gunfire on Saturday afternoon forced the Masten Park neighborhood in East Buffalo to become the latest place — after El Paso; Christchurch, New Zealand; and Charleston, S.C. — to grapple with a mass killing driven by white supremacist ideology and the wave of attention that follows mass shootings. 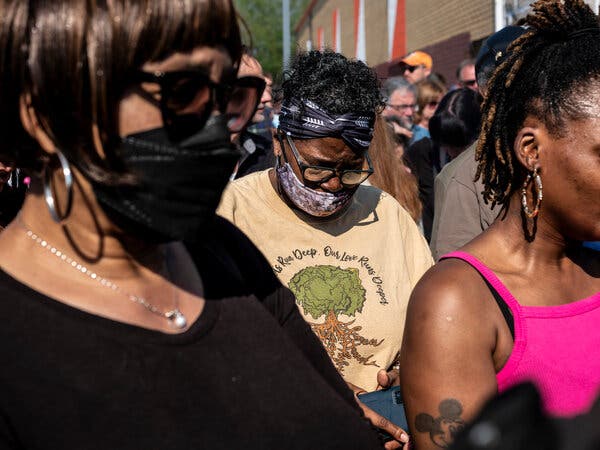 People gathered outside the Tops supermarket in Buffalo to denounce the racism that fueled a mass shooting and that they say has long been a problem in the city.Credit...Joshua Rashaad McFadden for The New York Times

But for many residents, the experience has prompted fury at what they see as the hypocrisy of a world that turns its eyes to their neighborhood only when the racism they’ve witnessed for years has become violent.

For many Black people living here, the effects of discrimination have been felt much longer — and the violence represents a uniquely harrowing moment in a lengthy history of trauma.

“The pain is in our DNA at this point,” said Earlene Patterson, 64, who bought milk and other food from the Tops grocery store days before the attack. “It’s in my great-grandfather, my father. It’s in me.”

The suspect in the massacre, Payton S. Gendron, 18, embraced white supremacist ideas in a 180-page document posted online before the attack and named his top goal as killing as many Black people as possible, the authorities said. Mr. Gendron pleaded not guilty on Saturday night.

In the document, he said he would travel hours to Buffalo from the Southern Tier of New York. And while he wrote that he hoped for the toll to be much larger, the damage inflicted was immense.

“People are going to try to excuse it as this person not being from Buffalo — they’ll say things like ‘This is not who we are,’” said J Coley, a Ph.D. student and instructor in the University at Buffalo’s sociology department. “I just want to be clear that this is exactly who Buffalo is. It doesn’t matter that we have a Black mayor. This is still a place of anti-Black racism.”

Buffalo has been marked by severe segregation for decades, offering an extreme example of the plight that Black people in many deeply divided urban centers have suffered. In 1991, one analysis found the Buffalo-Niagra Falls metro area was the fourth-most segregated in the United States; a study published two decades later found it ranked as the nation’s sixth-most segregated. 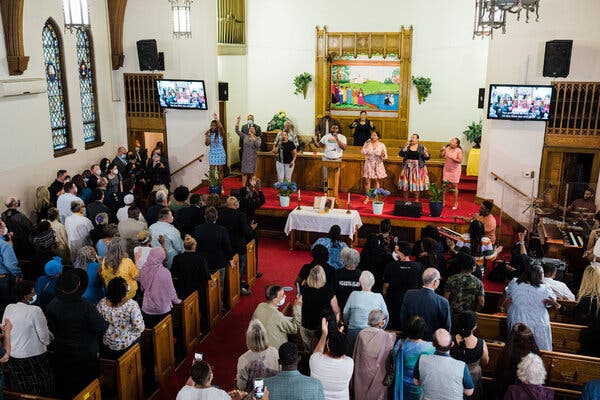 Congregants at Macedonia Baptist Church in Buffalo gathered to pray for the victims of the shooting on Sunday night.Credit...Gabriela Bhaskar/The New York Times

Residents say the city is split into two vastly different worlds, the East and West Sides. About 85 percent of Black Buffalo residents live in East Buffalo, and researchers have mapped the effects of the split on nearly every aspect of life, including education, job opportunities, housing and even life expectancy, according to a 2018 report from the Partnership for the Public Good.

Over the past three decades, living conditions for Black residents across several measures have improved little — and in some cases have worsened, according to a 2021 report by the University at Buffalo. Black residents in Buffalo, for example, live an average of five fewer years than white residents. (Nationally, the gap between white and Black life spans was 3.6 years, according to a 2018 study.)

The violence on Saturday played out against the backdrop of another visible sign of the area’s struggles: About two blocks away from Tops is the Kensington Expressway, which was constructed during the nation’s recovery from World War II and which cut directly through a Black neighborhood.

The expressway displaced residents, stifled economic development and dismantled what the 2018 report called one of the city’s “greatest cultural assets”: a tree-lined public space designed by a renowned architect.

And so, as a neighborhood began to process the racist attack, longtime residents said it was tough to separate the recent burst of extreme violence from the decades of pain that preceded it. One sign placed next to a memorial of white candles and flower bouquets seemed to encapsulate the emotion: “There are no words for this heartache.”

Some residents questioned whose lives were being safeguarded in Buffalo. Several reflected on aggressive encounters with Buffalo police officers. They said they believed that, unlike Mr. Gendron, a Black gunman would not have survived the attack.

Others worried that if the police increased their presence in the shooting’s aftermath, it might only magnify the area’s problems.

At rallies throughout Sunday afternoon, where neighbors waved the red, black and green Black liberation flag, many questioned why local politicians who they said had not previously prioritized their neighborhood were suddenly calling for change. 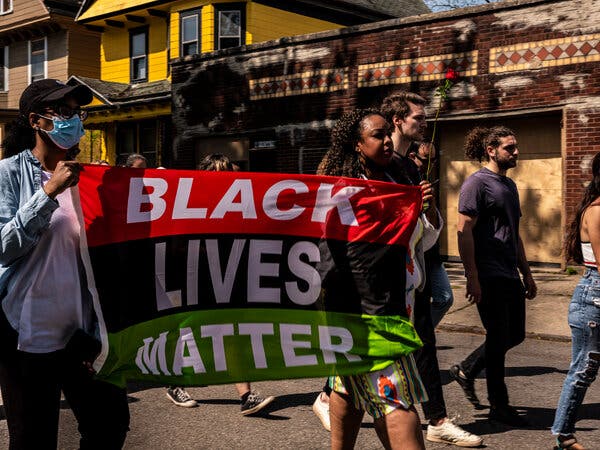 Buffalo residents marched with flags and bullhorns on Sunday.Credit...Joshua Rashaad McFadden for The New York Times

She compared the neighborhood “to a power keg ready to explode” with the frustrations of residents.

The importance of the Tops grocery store to neighbors has compounded the distress. “It’s been a heart of the East Side,” said Charlene Caldwell, 55, picking up food on Sunday from volunteers, who had set up a community fridge in the store’s absence.

Some residents said that when the Tops on Jefferson Avenue first opened in the neighborhood in 2003, they were frustrated that the grocery store was not Black-owned. Still, the market closed a wide void — and as the gunfire erupted, that chasm immediately broke back open.

On Sunday, the supermarket chain said in a statement posted on social media that the store would “remain closed until further notice.” But it added that “we are steadfast in our commitment to serving every corner of our community.”

Still, many said the indefinite loss of a neighborhood staple would ripple through the community long after the attention to Buffalo faded.

“The fact that it happened here dealt not just an emotional blow, but also an economic blow,” said Shango Oya, a resident of the neighborhood for more than a decade. “We’re in the heart of the inner city. This is the heart of Black folks. And if this doesn’t reopen, it’s going to kill the economics in this community — and the situation here is going to be even worse.”