There are two lessons one can learn from the Sri Lankan experience. The first is that a welfare state is totally incompatible with a neo-liberal regime. The second is that every country is vulnerable to a “contingency crisis” under neo-liberalism. 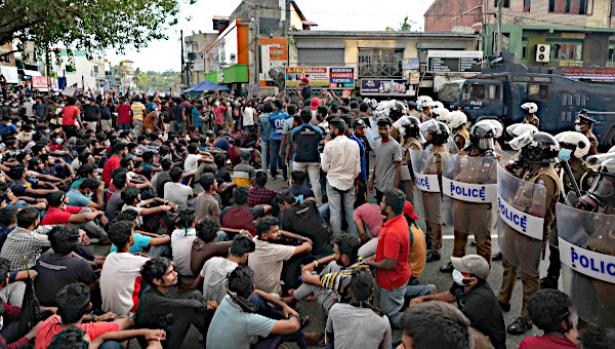 SO much has been written on the Sri Lankan economic crisis that the facts are by now quite well-known (see for instance C P Chandrasekhar, Frontline April 22): the massive build-up of external debt; the huge Value Added Tax concessions that pushed up the fiscal deficit and made the government borrow abroad even to spend domestically; the decline in foreign exchange earnings because of the pandemic that particularly hit tourist inflows; the downward pressure on the exchange rate which made many Sri Lankan workers choose the unofficial route to send their earnings home rather than the official route; the precipitous decline in foreign exchange reserves; the directive of the government to cut down on the use of chemical fertilizers to save foreign exchange that actually hit foodgrain output; and so on.

But on the question of who is responsible for this turn-around in Sri Lanka’s fortune, from being a “model” welfare state to being the “sick man” of South Asia, there is less agreement. While everybody would agree that the Rajapaksa government must take responsibility for the collapse, there is much disagreement on where exactly the government’s culpability lies.

The American establishment and the new cold-warriors of that country put the blame on the Sri Lankan government’s developing close economic relations with China (and we shall no doubt hear much more of it in the coming days); others blame the sheer “irresponsibility” of the government which is accused of “sleeping” when Sri Lanka’s external debt was building up. Some Indian commentators have even said that several state governments in India were going down the same path as Sri Lanka had done and needed to be reined in before a crisis struck here.

The problem with all these explanations however is that they completely ignore the role of neo-liberalism in precipitating the Sri Lankan crisis. To say this is not to repeat a mantra. Under neo-liberalism, apart from the distress of the working people even in the best of times, apart from the structural crisis arising from the increase in the share of economic surplus in output in every economy and in the world economy, there is a third kind of crisis that particularly afflicts small economies, whose fortunes can change in the fraction of a moment. I shall call this the “contingent crisis” unleashed by neo-liberalism. It is “contingent”, as opposed to “structural”, because it afflicts not the world economy as a whole, nor even a huge swathe of it, but particular countries that happen to get caught in it at certain times. A hallmark of it is that wisdom invariably comes to everyone after the event. In this sense the Greek crisis was a “contingent” crisis. While Greece was piling up huge amounts of external debt, the debt did not immediately appear unsustainable. And by the time the debt did appear unsustainable, the economy had already gone beyond salvaging without a debt write-off. “Contingent” crises, it follows, are not accidental phenomena; they are intimately and organically linked to the neo-liberal regime. They arise because there is no way of knowing beforehand how much borrowing is “excessive”, until suddenly the crisis has struck. The crisis that neo-liberalism introduces into an economy, almost as if it has flipped a switch, is what I call a “contingent crisis”.

Some would dispute this on the grounds that they had seen the crisis coming. But a government, even a reactionary government, in an electoral democracy has certain constraints; it cannot roll back its expenditures, reduce its welfare programmes (however limited they may be), cut back on pension payments, or withhold salaries of government employees including of teachers in government colleges and doctors in government hospitals, because of a bunch of Cassandras that make dire predictions from the word go.

Consider an economy that experiences what appears to be a temporary balance of payments difficulty. It meets that difficulty through external borrowing, which it can easily do because after all it has faced no crisis until then. Rather than causing public expenditure cuts and creating hardships for the people, and a recession to boot, this appears a better option. But if the balance of payments difficulty lasts a little longer than originally predicted, then the debts have to be rolled over on more onerous terms, and within a very short time the debt terms become so unfavourable that the country is staring at a crisis.

To say this is not to exonerate the Rajapaksa government from blame; its measures like the indirect tax cuts that left a yawning fiscal deficit, as they were not balanced by any countervailing direct tax increases (the rise in wealth taxation came later and was too minuscule to count), obviously compounded the crisis. Nor can one close one’s eyes to the myriad acts of omission and commission by the Sri Lankan establishment. But to focus only on these and ignore the basic context of neo-liberalism within which the Sri Lankan crisis has unfolded and which is now taking so heavy a toll on the people that they have come out on the streets in large numbers, would be simply mindless.

There are two unambiguous lessons one can learn from the Sri Lankan experience. The first is that a welfare state is totally incompatible with a neo-liberal regime. Sri Lanka in the past had built up a welfare state that was quite enviable in a third world context. In a non-neo-liberal regime such a welfare state can withstand a sudden drop in foreign exchange earnings, even without enlarging the country’s external debt, by cutting down on a variety of non-essential imports. Under neo-liberalism however the government either has to cut back its expenditure, thereby attenuating its welfare state measures, in order to reduce aggregate demand and hence imports, or to keep its expenditure going, including on welfare state measures, by increasing the external debt. In the latter case however, if there is some delay in the recovery of foreign exchange earnings, then within a very short time the debt terms become onerous and the country is caught in a debt-trap, making any continuation of welfare state measures an absolute impossibility. In other words, even if it may appear for a while that a country can combine welfare state measures with a neo-liberal regime, the incompatibility between the two comes to the fore, at the first shock to the system; the shock in short exposes the incompatibility even if it is camouflaged for some time under normal circumstances.

This goes against what many economists argue. They believe that the neo-liberal regime, by creating an “investor-friendly climate”, attracts foreign investment and stimulates domestic investment, so that the growth rate of the Gross Domestic Product picks up, which makes the adoption of welfare state measures that much easier. This argument has two obvious lacunae: one, a mere increase in GDP growth rate does not enable the creation of a welfare state unless the rich are appropriately taxed, and the government in its obsession to keep up the “investment climate” never raises taxes on them which thwarts any larger welfare expenditure. Two, as we have just discussed, even if perchance the country inherits welfare state measures from pre-neo-liberal days and continues with them, so that it appears that there is no conflict between neo-liberalism and the sustenance of a welfare state, any shock to the system immediately disabuses one of any such illusion.

The second lesson from the Sri Lankan experience is that every country is vulnerable to such a “contingency crisis” under neo-liberalism. What has happened to Sri Lanka can happen to any country that remains embroiled within a neo-liberal regime. The way out lies not in cutting down public expenditure and reducing welfare state measures within the neo-liberal regime, as many Indian commentators have been demanding vis-à-vis state governments, but rather in getting out of the neo-liberal regime altogether. To be sure, this would not be easy, but there is no alternative to it. The Sri Lankan government’s culpability can be said to lie in taking that country into the clutches of neo-liberalism, though there of course governments scarcely have any choice. International finance capital bulldozes countries into adopting a neo-liberal regime.

Prabhat Patnaik is an Indian political economist known particularly for his advocacy of measures to directly improve the lives of the poor.  He taught at the Centre for Economic Studies and Planning in the School of Social Sciences at Jawaharlal Nehru University in New Delhi, from 1974 until his retirement in 2010. He is the author of Re-envisioning Socialism (CUP, 2012).