Dollar General is one of the lowest-paying major retail chains, with average wages barely above the $7.25 federal minimum. Low pay is made worse by the lack of hours allotted to workers. In response workers are starting to organize.

May 25, 2022 Mike Kuhlenbeck The Progressive
Printer friendly
Dollar General Workers Refuse To Be Silenced Published May 25, 2022 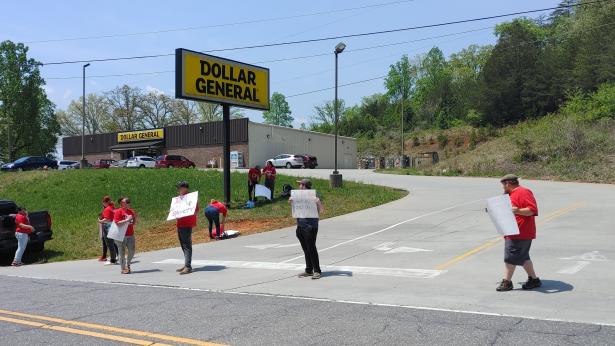 Mary Gundel, thirty-three, started working as a store manager at a Dollar General store in Albany, Georgia, in February 2019. After working there for a year, she relocated to Florida to manage a store in Tampa with her husband and three children.

Gundel, in an interview with The Progressive, describes the “horrible working conditions” that existed when she started working for Dollar General , such as mold in the cooler and a broken air conditioner when it was hot outside. Whenever she filed complaints with the company to make repairs, such as for a broken door, she heard the familiar phrase Dollar General employees have become accustomed to: “Put in a ticket.” The phrase has become synonymous with workers being brushed aside and their grievances ignored.

“I’m giving my all and getting nothing in return,” Gundel says. “It starts getting harder to deal with when you feel like nobody is in your corner, nobody wants to listen to you.”

Gundel vented her frustrations about Dollar General practices in a series of TikTok videos, which quickly went viral and racked up hundreds of thousands of views.

“I was at my breaking point. I was to the point where I was tired. I basically dedicated my life to this company, never seeing my kids, I’m never home, I barely get one day off if I’m lucky,” she says. “Even on that day off, my phone is still ringing off the hook with my boss or people at the store. I just want to know that I’m not the only person who feels this way.”

Dollar General workers and community supporters protest in front of their store in Marion, NC on May 2.  Raise Up/Fight for $15 and a Union

“I felt as though I wasn’t in the wrong,” Gundel says. “I really wasn’t saying anything bad about the company, I wasn’t being derogatory. Everything I was saying was true.”

On April 1, Gundel was fired after more than three and a half years working for the company.

“After I had been terminated, the movement blew up and it became its own entity to the point where even more people started speaking out about their experiences at Dollar General,” Gundel says. “They were all thanking me. I had thousands of messages from every platform telling me not to stop or let this company bully me.”

The hashtag #PutInATicket started as a jab against the typical response from management when workers raised concerns about their working conditions. Gundel says people started using the hashtag when posting pictures and videos with stories about their stores and “the hashtag created itself.” She authored a petition, which has received more than 51,000 signatures.

What started as Dollar General workers merely sharing their stories on social media quickly manifested into a growing movement. The day after International Workers’ Day, employees staged a nationwide walkout, with some even quitting and turning in their keys.

Dollar General, which opened its first store in 1955 in Springfield, Kentucky, is a discount retail chain with more than 163,000 employees working in 18,190 stores in forty-seven states. The retailer has been quite profitable despite the economic turmoil triggered by the coronavirus pandemic. With net sales amounting to more than $34 billion, company executives have been enjoying lucrative compensation packages—especially CEO Todd Vasos, who received $17 million in fiscal year 2021, which amounts to 986 times the median employee’s pay at the company.

Despite its success relative to other major retail chains, Dollar General is one of the lowest-paying, with average wages barely above the woefully insufficient $7.25 federal minimum wage. Rising costs of living and inflation are worsened by the lack of hours allotted to workers.

Ashley Sierra, thirty-three, has worked at the Dollar General store in Marion, North Carolina, on and off for two years. Making $11 an hour (although their wage was only $10 an hour during the height of the pandemic), Sierra joined her fellow workers for the strike.

“I work part time, less than thirty hours a week,” Sierra says. “I want to work more hours, but I can’t get them. My check is only about $200. It’s hard to pay the bills. I have kids; my youngest is ten years old. Dollar General can afford to pay us $15 an hour right now. If it wasn’t for us, there would be no company and no millions in profit.”

When the Marion location employees decided to strike, they reached out to Raise Up, a worker advocacy organization affiliated with Fight for $15. Through collective action across the South, the organization is helping to organize low wage workers employed at dollar stores, fast food restaurants, gas stations, homecare providers, and other sectors.

Mitchell Gilliam, thirty, also makes $11 an hour at the Marion store. Gilliam has been involved with Raise Up for roughly a year, attending meetings while employed at Dollar General and Wendy’s, but had never been on strike until May 2.

“Dollar General looks for lower populated, lower class areas so they can take advantage of us. The company thinks it’s their store, but it’s not—it’s our store,” he says.

Often setting up shop in high-crime areas, Dollar General locations have been described as “crime hotspots” due to the lack of staffing in their stores, leaving the few employees at any given site vulnerable to violent crimes such as armed robbery. As Business Insider reported,  there were more than 420 incidents of crimes involving guns at dollar stores, a category that includes Dollar General and other chains, from the beginning of 2017 through October 2021.

“Sometimes we are left working alone in the store for hours, even at night,” Sierra says. “Our store gets no phone signal, no way to call for help if the store gets robbed. This store has been robbed three times in nine years. Dollar General keeps us short staffed to save money and it’s dangerous for us.”

As Ben Zucker, co-founder of Step Up Louisiana, a community organizing group that is partnering with Dollar General workers, put it, “Dollar General is making a conscious choice not to invest in the safety and security and the communities where they put their stores, or pay their workers a living wage, and it’s time to hold them accountable. We won’t back down until our demands are met.”

Dollar General has long been accused of cutting corners at the cost of worker safety. The U.S. Department of Labor has proposed $3.3 million in fines against the company for OSHA violations, which include sanitation violations, obstructed exits, blocked electrical panels, and housekeeping issues, among other problems. This is in addition to the more than $8 million the company has been forced to pay for violations of the Fair Labor Standards Act.

These concerns existed long before the pandemic and continue to compound as the public health crisis drags on, along with the company’s aggressive punishment of those who dare to criticize it. On April 27, 2020, Daniel Stone, then a Dollar General market planning analyst, was fired shortly after he blew the whistle on the company’s lack of response to safety concerns raised by workers during the pandemic.

Last year, six Dollar General workers attempted to organize a union at their store in Barkhamsted, Connecticut. In response, the company hired five union-busting firms, paying them a total of $13,500 per day. The workers, fearful of losing their jobs, voted against unionizing the store when the election was held in October.

But this time, the national worker advocacy organization United for Respect has partnered with Step Up Louisiana through the Always Essential Coalition, which is fighting to “improve health and safety standards, better pay, and working conditions for essential workers.”

“The fight for workers’ rights is a united effort, and we stand in support of the Dollar General workers who are leading the charge toward fair wages and safer work conditions,” Bianca Agustin, United for Respect corporate accountability director, tells The Progressive in an email. “The issues experienced by Dollar General workers are felt far and wide across the retail sector. The standards created by the Dollar General corporate and executive team have set a dangerous precedent for the entire retail industry. Their fight is our fight.”

Current and former Dollar General employees are joining together with United for Respect, Raise Up, Step Up Louisiana and the Interfaith Center on Corporate Responsibility who helped organize the upcoming rally in Goodlettsville, where they will also be joined by workers from Starbucks, Amazon, and Walmart.

Dollar General did not respond to multiple attempts to seek its perspective for this article.

“I just want people to open their eyes,” Gundel says. “I want the higher-ups to understand what it’s like to be a worker in one of these stores, to not care so much about how deep their pockets are, but to care about how much their employees are struggling every single day.”

Mike Kuhlenbeck is a freelance journalist and National Writers Union member based in Des Moines, Iowa.