books The First Reconstruction: Black Politics in America: From the Revolution to the Civil War

This pioneering work examines in depth the little-known ways that African Americans engaged in electoral politics during Republic's early years. 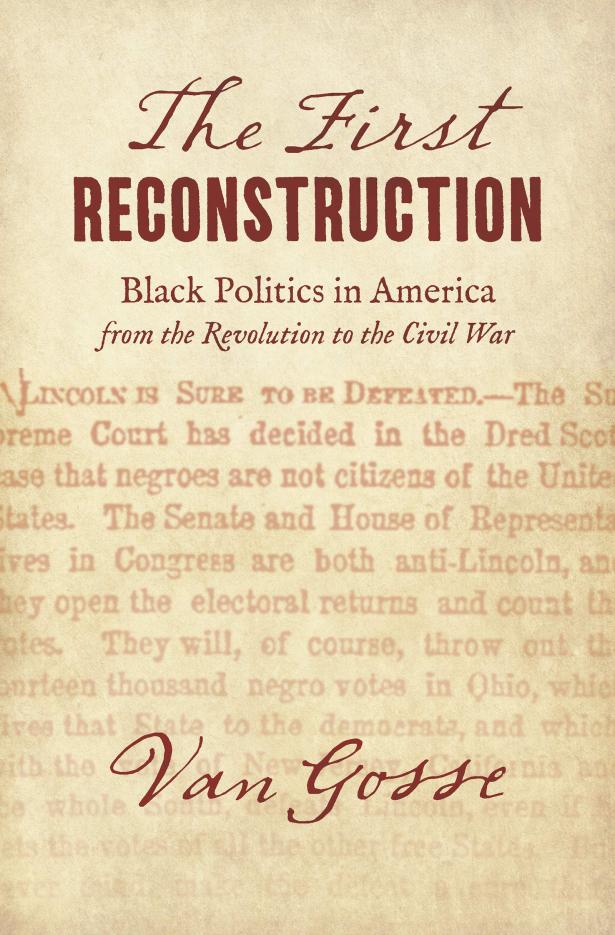 The First Reconstruction: Black Politics in America: From the Revolution to the Civil War
Van Gosse
University of North Carolina Press
ISBN: 978-1-4696-6010-3

The First Reconstruction provides a new account of northern party politics during the early republic that places Black men’s participation in electoral politics at the center of the narrative. For historian Van Gosse, African Americans’ political activism as voters and party activists was part of a “first Reconstruction” that lasted between the Revolutionary Era and the eve of the Civil War. The politics of race and race relations were central issues that defined party politics and had important implications for Black citizenship.

Gosse complicates the Whiggish and liberal historical accounts of the early republic written by Sean Wilentz and Gordon Wood, as well as the counter narratives penned by Don E. Fehrenbacher, David Roediger, and Alexander Saxton. Both historical schools agree that Black voters were either irrelevant because there were too few of them, that Black men could not have participated within the American party system because of racism, and that there were not a significant number of whites who believed in non-racial citizenship.

By contrast, Gosse shows that in certain northern states, cities, and towns, African American voters wielded significant influence in electoral politics and that the White Republic was hardly a foregone conclusion; there were times when Black men gained influence in the electoral arena. Building on studies of early American politics by David Walker Howe, Lee Benson, James Brewer Stewart, and Roger Smith, The First Reconstruction illustrates that race (racialism) was an important driver in American politics, but it was not solely organized around whites and whiteness. Black men sought to insert themselves in partisan battles to promote their own version of republicanism—one that embraced both natural rights ideology and claims to birthright citizenship in opposition to white supremacy.

The First Reconstruction begins with an overview of Black republicanism—an important component of African American men’s political discourse that emphasized American nativity, birthright citizenship, nativism, and Black men’s patriotism. According to Gosse, Black republicanism became the basis on which African American men and their white allies created a “vernacular politics focused on voting and electoral politics” (31). Black republicanism proved a valuable tool for African Americans activists—not only as a rhetorical device in seeking to establish claims to citizenship, but also in bolstering partisan political alliances with whites, especially those who believed that Black men were native born citizens. This first chapter lays out the themes surrounding northern Black electoral politics discussed in the subsequent chapters.

The balance of the book is divided into four sections that focus on four northern polities: Pennsylvania (chapters 2 and 3), Upper New England (chapters 4 through 7), New York (chapters 8 through 10), and Ohio (chapter 11). Each section concludes with a coda that describes the different endpoints of the first Reconstruction and the extent of its success within each region. By focusing on individual states and regions, Gosse illustrates just how complex northern electoral politics were as the nature of partisan party politics varied across the North. Each region had its own unique political culture which, at times, varied within a state. There are also practical reasons why Gosse provides a detailed look at state politics: African Americans were excluded from national electoral politics, and political developments at the state level had greater resonance in the day to day lives of people. Gosse concludes his study by examining the contradictory results that Black politics produced in the aftermath of the Civil War.

The First Reconstruction is a conventional political history that focuses on elections, political parties, party leaders, political officials and legislative debates. Gosse’s analysis relies on newspapers, the papers of prominent politicians, the debates in Congress, state legislatures, and state constitutional conventions, election results, court cases, and testimonies and depositions surrounding electoral challenges. se sources provide insight into voting behavior, competition between the major political parties, partisan mobilization, and patronage. They demonstrate Black men’s role in electoral and party politics and illustrate how race both animated certain political questions and complicated the political parties’ attempts to maintain national unity. Gosse includes a prosopography, based on manuscript censuses, of the Black leadership class from five locations discussed in this book. This appendix yields insights into the social and economic background of the Black political class, as well as continuities and differences across the North. Given that women were excluded from participating in electoral politics, African American women are absent from this study.

The First Reconstruction will appeal to those interested in political and African American history. Gosse upends the conventional periodization of the party system of the early republic by placing the politics of race (racialism) at the center of partisan political debates. Each section upends widely accepted notions about Black politics. For instance, Grosse convincingly shows that Black Philadelphians abandoned political action for moral reform before disenfranchisement in 1838 not from fear of violent reprisals at the hands of white mobs, but because African Americans were never assessed the county tax required to have their names listed on the voter registration rolls. For Upper New England (Portland, Maine; New Bedford, Massachusetts; and Providence, Rhode Island), Gosse compellingly argues that at the local level, Black votes did shape the outcome of elections. Despite New York state’s special freehold requirement for Black voters, in 1821, thousands of Black men were able to regain the franchise by 1850. Black men were able to wield political influence in New York electoral politics. The First Reconstruction is an important work that provides a new interpretation of the politics of the early republic.

Lucien Holness is an assistant professor of history at Virginia Tech. His current book project examines the making of free soil and Black freedom in southwestern Pennsylvania from 1780 to 1865.