In light of recent revelations about the Martin family’s political activities, chefs are looking for alternatives to Martin’s products known for their association with Shake Shack, which uses them at locations around the world. 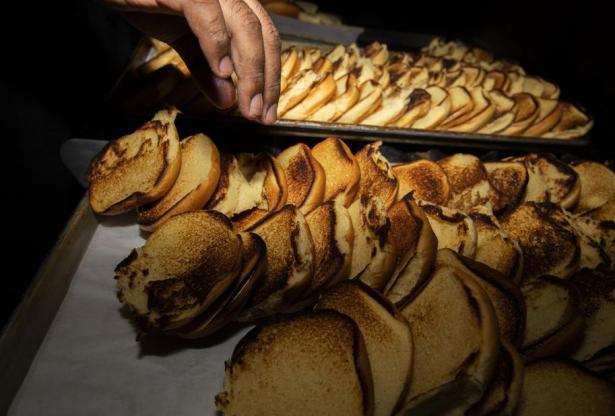 Often lauded as the optimal bun for smashburgers, the squishy, yellow potato roll has been a holy grail for burger geeks around the country.

The reigning champ among those buns has to be the one from Martin’s Famous Pastry Shoppe, a family-owned company in Chambersburg, Pa. It catapulted to fame with the rise of Shake Shack, which uses its bread exclusively at its locations around the world. Locally, use of the Martin’s potato bun, at operations like Wesburger, Kowbird and Smish Smash, has signified chefs’ seriousness about their sandwiches.

But in light of recent revelations about the Martin family’s political activities, these chefs are scrambling to find something else to use.

“They make a great product — that’s the part that sucks,” said Wes Rowe, owner of Mission District restaurant Wesburger ‘n’ More. He compared it to going to a family reunion and finding out that someone you love is espousing hateful beliefs: “On one hand it’s family, but on the other hand, I can’t be OK with this.”

On May 12, Philadelphia news outlet Billy Penn (a news site associated with radio station WHYY) published an article tying the Martin family to Pennsylvania state Sen. Doug Mastriano, the GOP candidate for governor. Campaign finance reports show that several members of the Martin family, including executive chairman of the board Jim Martin, wife Donna Martin and social media manager Julie Martin, donated generous amounts of money to Mastriano’s campaign in 2021 and 2022. Jim Martin, whose parents founded the bakery, donated $110,000 last year; according to the Philadelphia Inquirer, the average donation amount to Mastriano is $206.

Mastriano, a pro-Trump Republican and QAnon conspiracy theory promoter, has been subpoenaed by the congressional committee investigating the Jan. 6 insurrection in Washington for using campaign funds to charter buses for some who marched toward the Capitol (including himself). In 2020, he became known for his efforts to assist Trump in his attempts to overturn the results of the presidential election.

If elected governor, Mastriano has pledged to ban abortion with no exceptions for rape or incest, reduce voting accessibility and attack diversity initiatives in schools. He is among the most prominent faces of a growing far-right Christian nationalist movement in American politics: His rallies, complete with apocalyptic rhetoric and non-Jewish performers in Jewish prayer shawls blowing on shofars, can seem like the opening shots of a holy war.

Shake Shack, which included members of the Martin family at its IPO debut at the New York Stock Exchange in 2015 and advertises itself as a LGBTQ-friendly workplace, has not returned The Chronicle’s request for comment, though the company sent a statement to Today to address the growing backlash. It came out in support of “equality, inclusion and belonging” but did not say it would take any concrete actions. “In regards to the actions of individuals associated with the Martin’s company and their personal political donations — those are the choices of those individuals and do not express the values of Shake Shack. We continue to be in active conversations with Martin’s to express our concern.”

Martin’s has also not responded to a request for comment, though the company did seek to distance itself from any particular ideology in a Memorial Day social media post.

“I’ve been thinking about this almost nonstop since Billy Penn broke the news,” said Zack Fernandes, a former Philadelphian and the owner of Bay Area smashburger pop-up Lil’ Eagle Burger. It’s hard to calculate how much of the $32 he’s paid for each case of buns might have gone into the Mastriano campaign, he said.

“But since Martin’s is not a public company with no shareholders to hold them to account, they will have to deal with the consequences of such a horrific political affiliation in the wholesale and consumer markets. I cannot in good conscience use Martin’s products any longer for Lil’ Eagle pop-ups, especially while people I love still live in the state of Pennsylvania,” he said.

Fernandes will likely run out of his supply of buns at his next pop-up on Sunday, June 12, and then seek out another supplier.

The Martin family’s ties to Mastriano and right wing politics extend beyond their donations. In 2019, the bakery’s headquarters hosted a political event with the politician. His wife, Rebecca, previously served as the bakery’s in-house chaplain. In their hometown of Chambersburg, the Martins attend Antrim Brethren in Christ Church, which hosts seminars positing critical race theory as a spiritual bogeyman, deals in transphobic and homophobic rhetoric, and successfully pushed to repeal the town’s LGBTQ anti-discrimination policies in the name of religious freedom.

In addition, political donation data first publicized by the Twitter watchdog KnowYourCEO reveals that Jim Martin has also made several contributions to the National Rifle Association’s PAC, totaling $12,000 over the past decade.

According to Smish Smash co-owner Amy Han, the East Bay burger pop-up is ditching Martin’s buns and hoping to test out a few alternatives.

Horn BBQ and Kowbird owner Matt Horn said that he’d already been considering swapping out the rolls for a local purveyor, and the Mastriano news convinced him to do so.

Wesburger owner Rowe found out about the Martin’s issue from culinary figure J. Kenji Lopez-Alt, who recently posted about it on his Instagram page. The next day, Rowe started calling his distributors to find another bun. Rowe said that he tries “to keep politics out of people’s mouths when it comes to the restaurant and burgers,” but the extreme nature of this case prompted him to take action.

He is concerned about issues of quality or the increased cost of switching suppliers, but also about potential blowback for doing something that could be read as political. In his six years of business, Rowe said, he’s never taken an action like this, which perhaps is testament to the intensifying polarization in national politics.